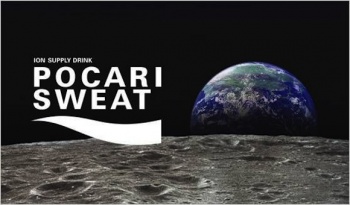 Hundreds of years from now, Aliens will open Japan’s Pocari Sweat time capsule on the moon.

You may not know of the somewhat oddly-named “Poccari Sweat” sports drink in your country, but here in Japan it’s on par with Gatorade as one of the go-to after-workout drinks, and now, by teaming up with Pittsburgh-based Astrobotic Technology Inc. and Singapore-based ASTROSCALE, Pocari Sweat aims to extend its brand awareness, by becoming the first sports drink on the moon.

More details about the project will be be announced in the middle of May, but for now, let it sink in that a bottle of sports drink will get to the moon before you do.

How long will it be before real, actual space advertisements, the kind that sci-fi authors like Isaac Asimov wrote about, become a thing?

47% of Australian Gamers Are Female