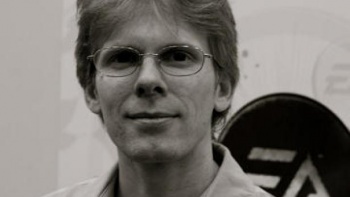 John Carmack of id Software fame says there’s actually very little difference between the new consoles coming from Sony and Microsoft, but he’s really not much of a fan of Kinect.

Id Software may not be the genre-dominating power it once was but John Carmack is still John Carmack and when he says something about computer stuff – zigatexels, gigapoops, teragoogles and whatnot – you can be pretty sure he knows what he’s talking about. And so his comparison of the upcoming Xbox One and PlayStation 4 consoles during his QuakeCon keynote is especially interesting, because in terms of computational power at least, in his eyes it’s pretty much a toss-up.

Carmack said he hasn’t done any “really rigorous benchmarking” yet but declared that the two systems are very similar, and both very capable. “It’s almost amazing how close they are in capabilities, how common they are,” Carmack said. “The capabilities they give are essentially the same.”

And although he said the backlash against the Xbox One was “a bit on the side of a witch hunt,” he also made it clear that he’s not really a fan of Kinect, knocking it for “fundamental limitations with the latency and frame rate” and saying it provides a “poor interaction” with the system. “One way that I look at it is – I used to give Apple a lot of grief about the one button mouse,” he said. “Anybody working with a mouse really wants more buttons – [they’re] helpful there. Kinect is sort of like a zero button mouse with a lot of latency on it.”

The 2013 edition of QuakeCon is underway now and runs until August 4.

Why Games Will Only Get Cheaper