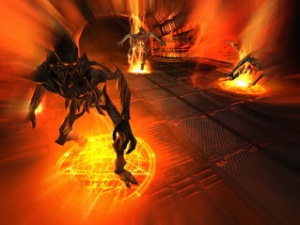 In the wake of id Software’s new deal with Electronic Arts, John Carmack revealed that until recently, he thought of the publishing giant as an “Evil Empire.”

In an interview with GameSpot following the announcement that id’s upcoming Rage would be published by EA Partners, Carmack said he initially had misgivings about choosing EA because of the company’s past treatment of small studios, but was convinced to make the move after talking with other developers. “I’ll admit that, if you asked me years ago, I still had thoughts that EA was the Evil Empire, the company that crushes small studios,” Carmack said. “I’d have been surprised, if you told me a year ago that we’d end up with EA as a publisher.”

“When we went out and talked to people, especially EA Partners people like Valve, we got almost uniformly positive responses from them,” he continued, adding that EA Partners deals aren’t like standard publishing arrangements. “Instead, they really offer a menu of services – Valve takes one set of things, Crytek takes a different set, and we’re probably taking a third set.”

Whether the relationship between id and EA will develop further remains up in the air at this point, however. “It’s a single title deal right now,” Carmack said. “As with previous id titles, we don’t have anything locked up just now, and we’ll be shopping around Doom 4 in the not-too-distant future.”