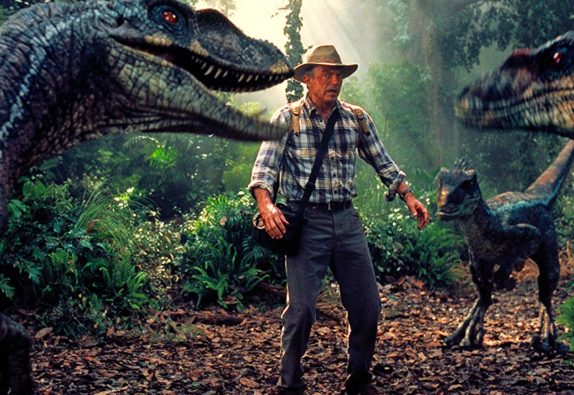 The Jurassic Park franchise is set to come to an end (kind of) with the release of Jurassic World: Dominion, but according to director Colin Trevorrow, it won’t just be ending the series, but fixing it up a bit as well. Speaking with EW (via GamesRadar), the director dove into how this third film, which is bringing back a plethora of actors from the original trilogy, will tie together the semi-discordant three films.

He explained the following:

When you got to the end of the Jurassic Park trilogy, it may not have been as clear in what the complete story of those three movies was because they were a bit more episodic in the way that they were approached. … when you watch Dominion, you really feel like you are learning how much of a story that first set of movies was and how everything that happened in those movies actually informs what ultimately is able to happen in this.

Those first three films are definitely “episodic.” The first film wasn’t made to deliver sequels, and the second movie turned into more of a King Kong-style adventure than anything else. The less said about the third film, the better, as despite the return of Sam Neill and a trip back to the park, it all felt really contrived. None of the storylines built up together at all, though that wasn’t really the intention back then. It sounds like Jurassic World: Dominion is looking to stitch them into a cohesive whole and make the franchise one six-part narrative and not two loosely connected separate trilogies (something Trevorrow had seemingly also been hoping to do with Duel of the Fates).

While Jurassic World: Fallen Kingdom left much to be desired, the surprise short released in 2019, Battle at Big Rock, gave hope that Jurassic World: Dominion can deliver something interesting and special when it releases on June 10, 2022.