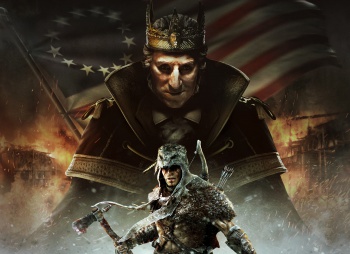 Those of us who paid attention in American History know that George Washington became the first president of the United States after the ratification of the Constitution in 1789. Assassin’s Creed III more or less follows a historically accurate version of the Revolutionary War (with, you know, assassins and templars), but upcoming DLC for Ubisoft’s title imagines an alternate history, one in which Washington declared himself king. History buffs don’t have long to wait until finding out what might have been: the first of three installments of The Tyranny of King Washington is coming to Assassin’s Creed III on February 19.

In The Tyranny of King Washington: The Infamy, protagonist Ratonhnhaké:ton (also known as Connor) wakes up to discover that the whole “winning freedom for the American people” thing was a dream, and in reality, George Washington now sits upon a throne. With the commander in chief now a ruling tyrant, it’s up to Connor to knock that crown off his head, and Infamy is the beginning of that journey.

The Tyranny of King Washington: The Infamy will be available for $9.99 on the Xbox 360, PS3, PC, and Wii U. You can also get all three installments as part of the Assassin’s Creed III Season Pass, which costs $29.99. No release dates for the succeeding installments were mentioned in the press release.

Ni no Kuni: Wrath of the White Witch Review