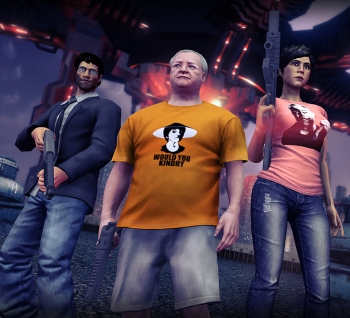 Fans of the surreal comedy web series Hey Ash, Whatcha Playin’? know that siblings Anthony and Ashly Burch are big fans of the Saints Row series. Saints Row: The Third has been the subject of several episodes of the web series. Developer Volition even provided the comedy team a real life, full size version of the Saints Row: The Third dildo bat weapon The Penetrator for use in a few sketches. Now, that relationship has gone to the next level, with Ash, Anthony, and their father Papa Burch available as homies for your crew in Saints Row IV. The Hey Ash, Whatcha Playin’ DLC pack was released on Steam yesterday for $2.99 USD.

Anthony Burch talked about the new DLC pack on the official Hey Ash, Whatch’ Playing? blog. After meeting some Volition employees at the Penny Arcade Expo and E3, the idea for the adding the Burches as homies in the game was born. As Burch describes it:

[S]ome dudes at Volition thought it might be cool to do a Hey Ash pack. “We were talking about stuff we could do,” one of them told me, “and somebody suggested a Hey Ash pack and our producer turned around in his chair, deleted what we’d previously slated for December, and just said, ‘I typed it in the spreadsheet. We’re doing that now.'”
I have literally no idea why they would think this was a good idea, but we decided not to stop them.

Anthony Burch is a former games journalist and currently works at Gearbox Software. He co-starred in the web series Anthony Saves The World for The Escapist. Ashly Burch acts in web series and feature films like Must Come Down, and maintains the blog How Games Saved My Life. She is also the voice of the Borderlands 2 character Tiny Tina.