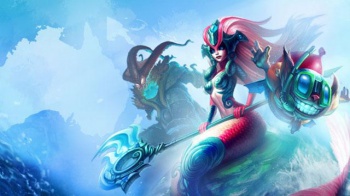 Riot Games has no problem with fans creating new projects based on League of Legends, which comes as great news to the team behind League of Fighters.

League of Legends is a very popular game. So popular in fact, that it’s spawned a fan-made fighting game off-shoot aptly titled League of Fighters. We brought you the announcement of that fighter less than a week ago, and today we can report that the game officially has the blessing of Riot Games.

“We’ve been in email contact with Riot recently and they gave us a quick answer,” writes one of the project’s amateur developers on Instaburst.com. “Our game has been approved! As long as the game remains free to play, Riot gave us the thumbs up to continue working on League of Fighters.”

“Thats right, this game is going to happen and unlike many other titles like it, this fan game isn’t getting shut down any time soon.”

That’s great news, but what of other fan projects based on League of Legends? There’s good news on that front too. Following the request by the Instaburst team, Riot Games has updated it’s official “Legal Jibber Jabber” page to include the following passage:

We’ll start with our golden rule – you can use League of Legends IP as the basis for a fan project that you’re giving away for free or that’s only generating ad revenue (we’ll refer to this type of free fan project as a “Project”), as long as you comply with the guidelines outlined below for using our IP (the “Guidelines”). As a matter of fact, as long as you comply with our Guidelines, we think it’s great if you create awesome, free and original content for League of Legends fans.

Hooray for corporate generosity. It seems that Riot Games has taken a page from the Valve Software playbook, and are giving fans free rein to create whatever they’d like using Riot’s characters just as long as they don’t attempt to profit from their project. Of course, that was more or less the same set of guidelines Valve attached to the Half-Life games, and a number of modifications and fan projects based on those titles have spun off into huge franchises in their own right. Propers to the Instaburst team if they can turn League of Fighters into the next Counter Strike.