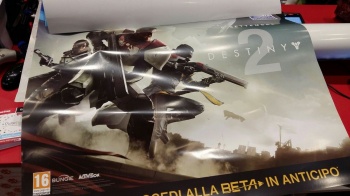 PS4 gamers will get first access to Destiny 2 according to the poster.

Italian gaming website Lega Network has just revealed what appears to be a leaked poster of Bungie’s upcoming Destiny 2, showing the release date as September 8. Another image of the poster has popped up on Imgur and Eurogamer is claiming that sources have indicated that these posters are legitimate.

Additionally, Twitter user Drunk Cat has also pointed out that the fine print of the poster states that PS4 is getting the game first, in the form of an exclusive beta. We have previously heard that this beta was slated for June.

We have reached out to Bungie for official confirmation. With this poster out in the wild, it should only be a matter of time before the publisher announces an official release date.