The Legend of Korra: Book Three trailer was released after a portion of the upcoming season leaked.

Because someone goofed, we get a surprise treat.

On June 3rd, co-creator Michael DiMartino announced on his tumblr that production of Book Three: Change was complete. On June 7th, Nickelodeon’s Mexican affiliate MundoNick accidentally posted a few of the episodes, according to Hypable (spoilers are available in that link, but they are hidden, so it is safe to visit). Other co-creator, Bryan Konietzko, said on his tumblr “Thanks to the shenanigans of Leaky McLeakerpants, we have released the *OFFICIAL* Book 3 trailer early.”

The Legend of Korra: Book Three trailer and a release date were expected at San Diego Comic-Con. Book 2 saw a premiere of the first episode and a trailer release at SDCC in 2013 and the season began to air two months later – and expected a similar pattern for Book Three.

For those unfamiliar, “Book” pretty much equals “season” for Legend of Korra and the series preceding it, Avatar: The Last Airbender. 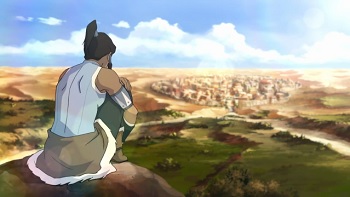 Discussion of the trailer below contains spoilers for Avatar: The Last Airbender and Legend of Korra Books One and Two.

The first thing that stuck me about the trailer was the music. It starts of low and tense, reminded me of Hans Zimmer’s work on The Dark Knight trilogy. It’s still very “Korra”, but it definitely has that feel, especially through the build up and all the way to the end of the trailer.

During the building progression, the events shown in the trailer increase in their emotional impact, especially some of the familiar faces, all the fighting, and Korra standing near a spirit – and I guess lava-bending is a thing now?

Which characters show up? Basically, all the main cast from the previous books. Meelo shows up more than I expected, and Jinora appears to still be interacting with the spiritual side of life and getting into trouble. There are also what appear to be a bunch of airbenders? Tonraq, Korra’s father, and Aubrey Plaza’s Eska, Korra’s cousin, also make appearances.

Oh, and apparently Zuko! It was mentioned in the series that he was still alive and it seems that finally he is making an appearance, sporting a beard similar to his uncle, Iroh, and doing a little firebending.

There were a few I couldn’t place, such as the young woman with an eye on her forehead, similar to Combustion Man from Book Three of Avatar: The Last Airbender. Also, there were a few shots from a prison cell featuring a long-haired man. In one of the clips he is sporting some Khal Drogo style tattoos, although it could be a different guy in this clip. Is this someone from the previous books that I’m forgetting? Also, who is the waterbending woman in a cage?

After getting a brief hint at where the series might be going, it looks like Book Three might be more grounded than Book Two. Of course, Book Two was entirely about the spirits and now Korra has lost her connection to the past Avatars. Still, with the bridge between the spirit and physical worlds open, I expect we will see some trouble with spirits in Book Three.

Below are some screenshots from the trailer, because the art of Legend of Korra is absolutely gorgeous. Now, I’m going to watch that trailer a few dozen more times.