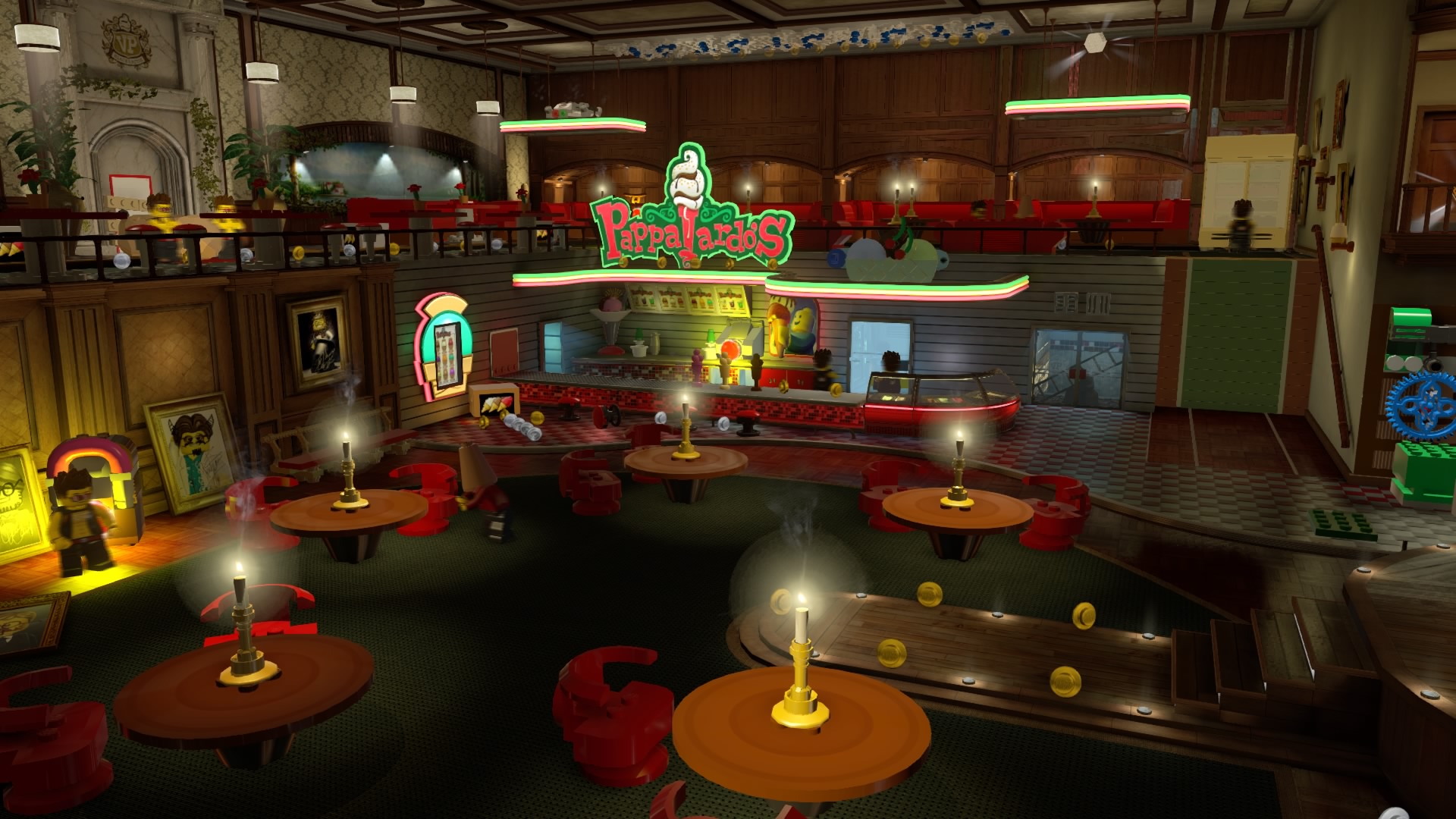 Chapter 11 of LEGO City: Undercover continues as Chase escapes from the Sentinels and clears out Pappalardo’s Ice Cream Parlor.

The action doesn’t let up. Right away, Chase is trying to escape from Blackwell’s security forces. After a quick ambush, he’ll have to return to the Ice Cream Parlor, where Rex Fury’s gang are running wild on Vinnie’s fine establishment.

We’re finishing up Chapter 11 here. Scroll down to find the first part in the Table of Contents if you’re looking for help completing Blackwell’s Mansion: Robbery, or the Rooftop Meeting mission.

Chapter 11: The Proof of the Pudding is in the Meeting – Part 2

Blackwell’s Sentinels aren’t going to let Chase escape so easily! Drive directly to the fort Downtown, where Chase is boxed in and ambushed by Sentinels. Defeat all the guards, including the reinforcements, and Moe will contact you. Answer the video call to learn that Vinnie might be in danger.

Return to Vinnie’s Ice Cream Parlor. Stepping into the Shield Icon, the camera will pan to show an entrance to the parlor on the rooftop. Climb the vat using the hand-holds, then jump across the poles. Use the Robber Disguise to open the vent and drop into the eleventh level. 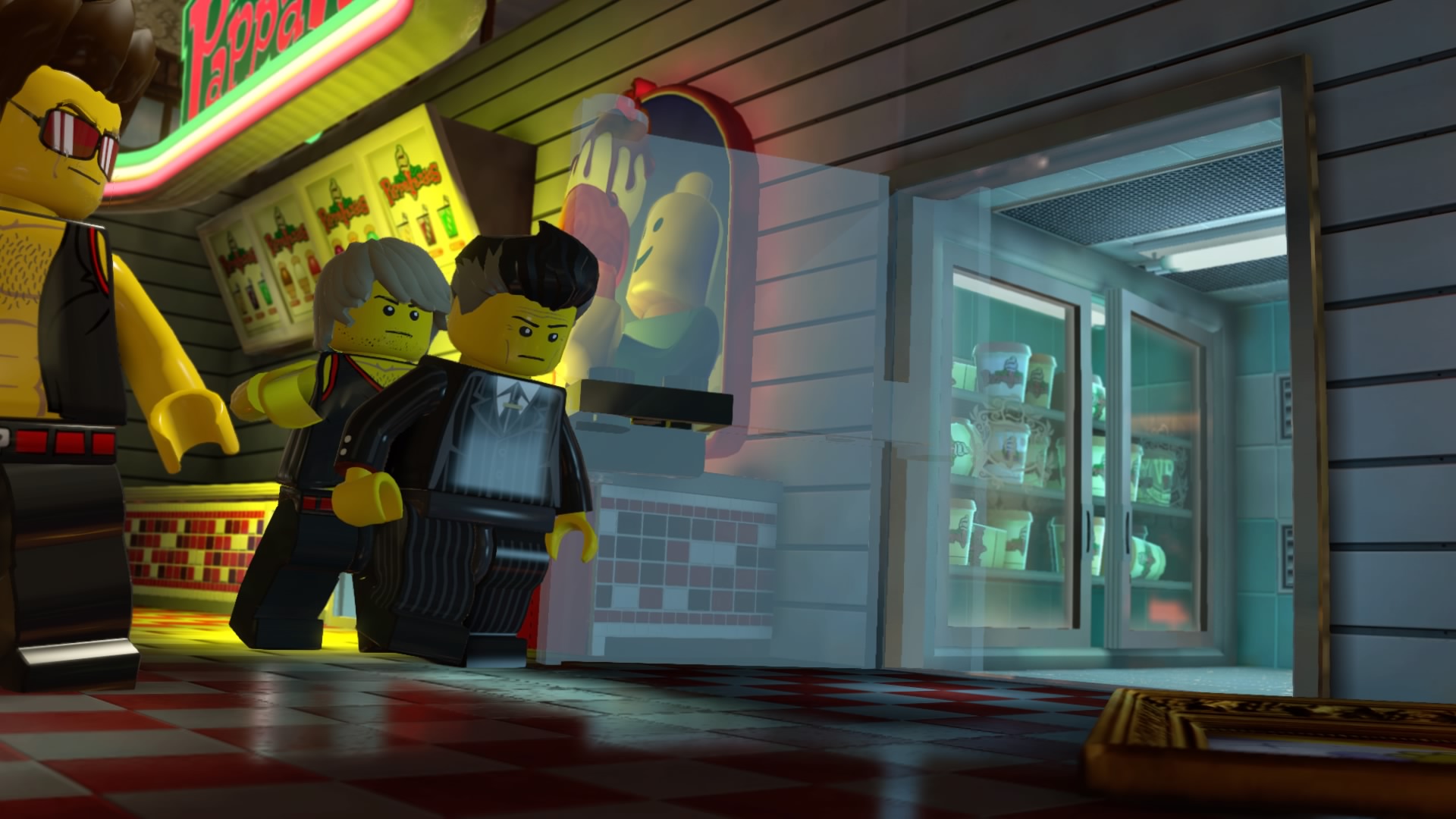 Vinnie gets “iced” in his own Ice Cream Parlor! Rex Fury has turned against his former partner, and it’s up to Chase to rescue Vinnie. Grapple the LEGO hook and pull open the double doors to get into the main floor of the parlor restaurant. To save Vinnie, use the LEGO grapple point above the freezer door. Pull the sign down and rebuild Vinnie to learn about your next destination – the factory!

There’s a secret passage to the ice cream factory in Vinnie’s office. To get up to his office, smash the LEGO ice cream crate to the left of the counter. Build the security terminal and interact, then carry the LEGO crate to the green mark on the right. The second LEGO crate you need is the freezer where you found Vinnie. 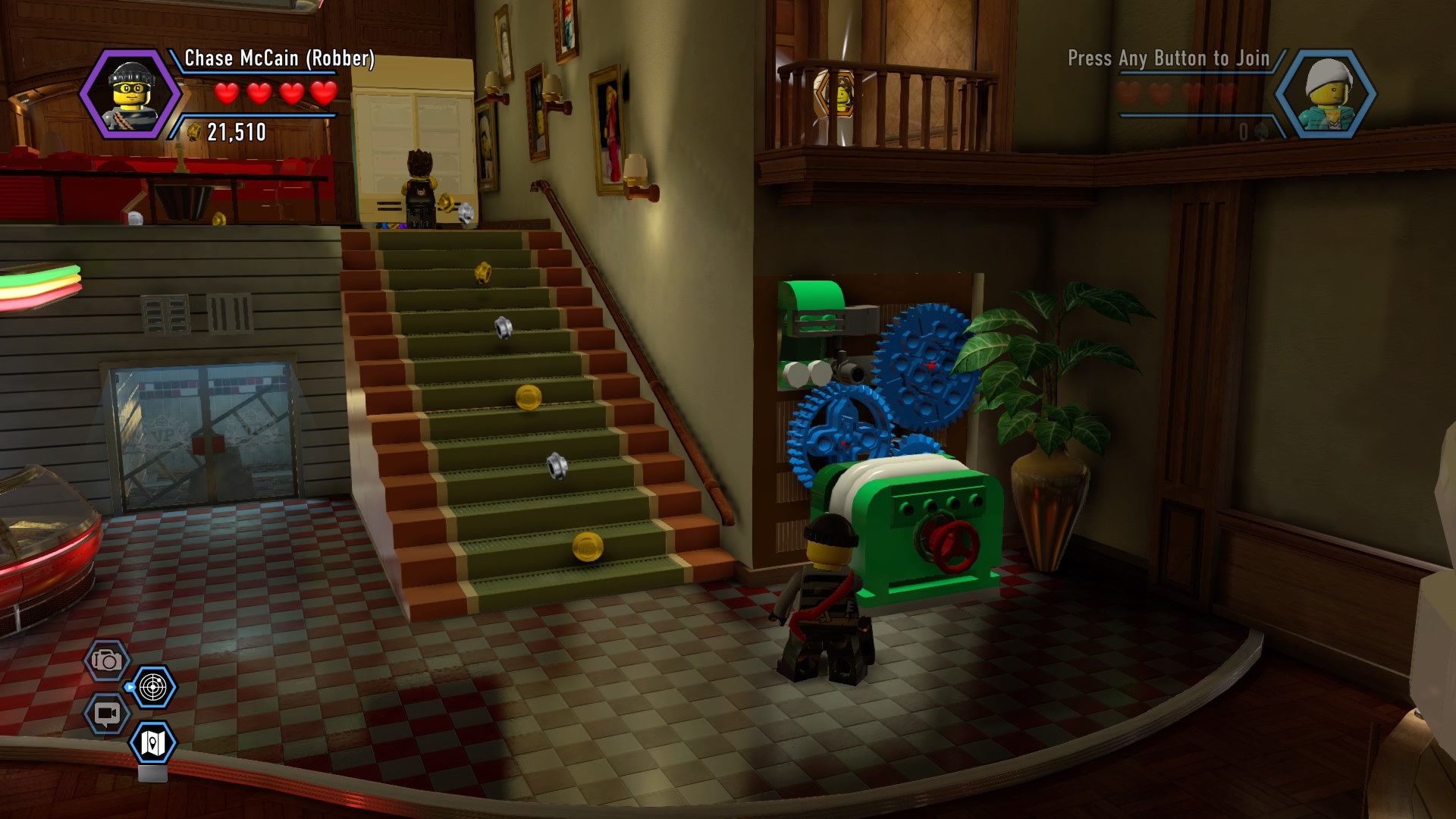 Place both LEGO crates on the green marks, construct, and turn the wheel to unveil the stairs up to the seating area above the main parlor floor. Up top, run left and smash the LEGO boulders (Miner Disguise) then bust open the door (Fireman Disguise) – the door leads up into Pappalardo’s Office.

In the office, defeat the members of Rex’s gang and bust the LEGO chair on the right side to find a Detective Scan marker. Follow it to locate a key, then stick the key into the mechanism in the back-left corner of the room. Open the safe (Robber Disguise) and use the new hopping bricks to create a LEGO ice cream statue. You’ll need to create two – let’s get on that. 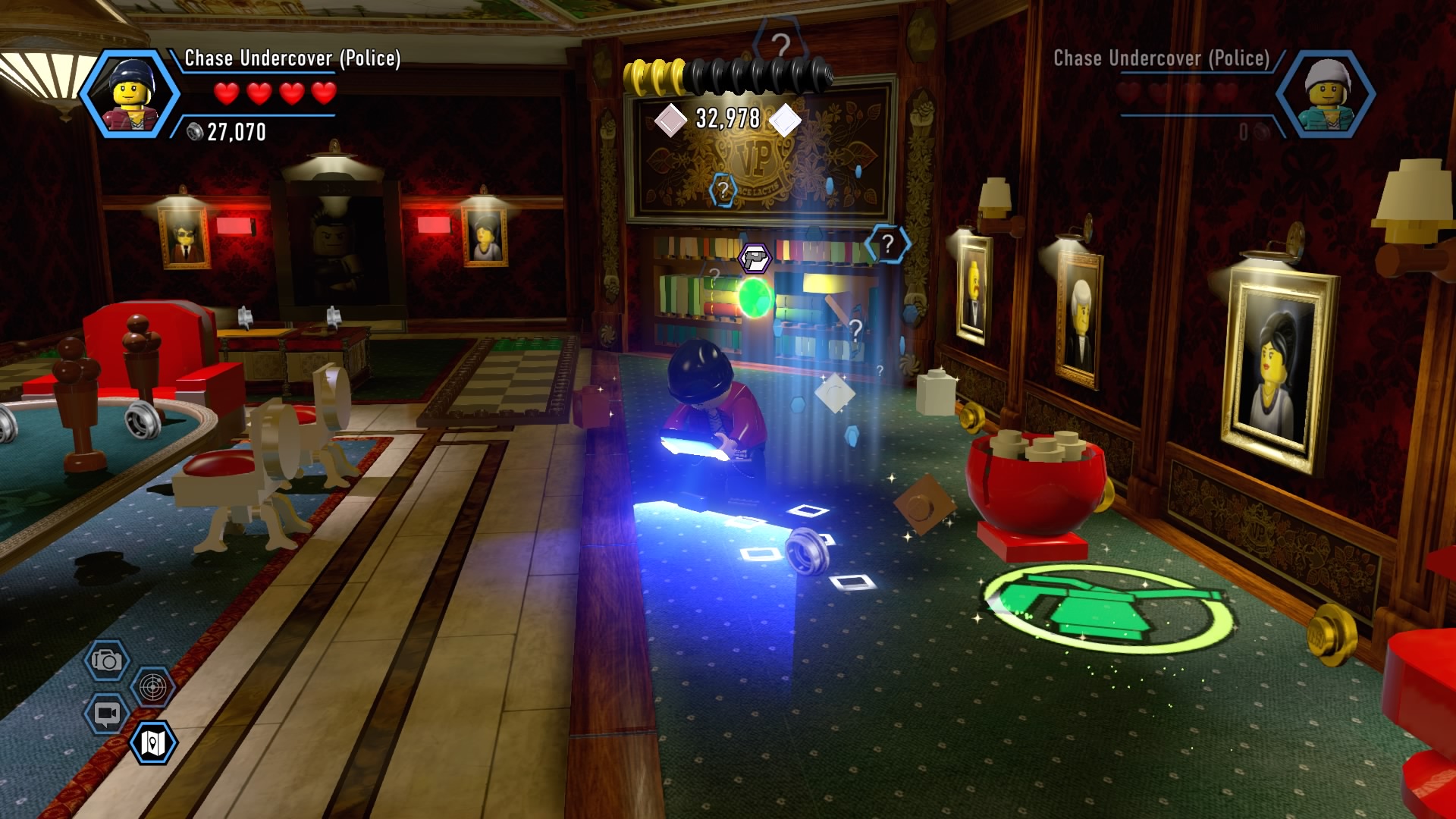 To make the right LEGO ice cream statue, smash the LEGO chair in the front-left corner of the office. That reveals a Detective Scan marker. Use it to open the cupboard, construct, and create a Color Swapper. Grab the red Color Gun power and shoot the green light on the back-right wall of the room. Push both LEGO statues onto the green markers to open the secret door. 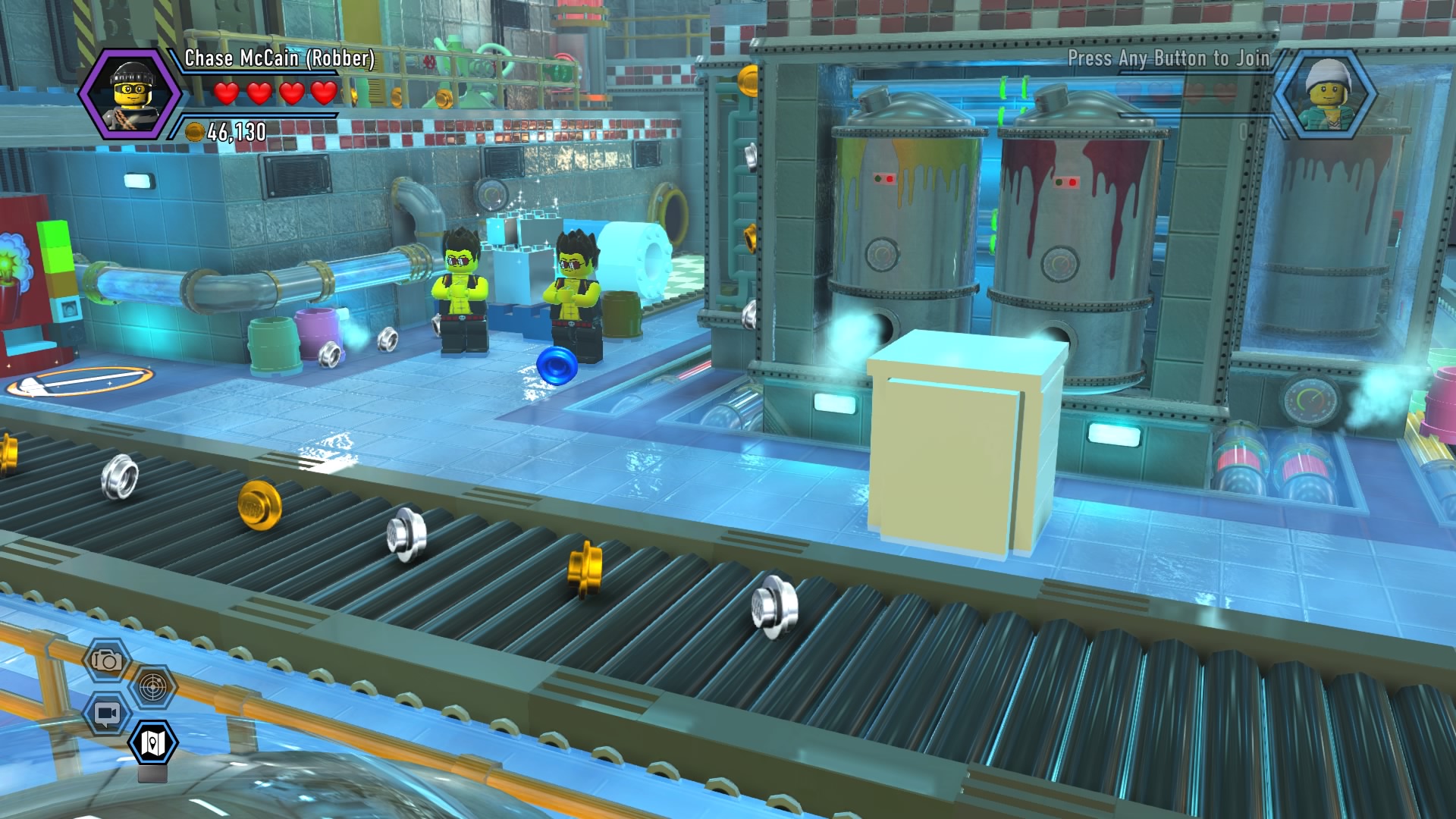 The shiny factory is guarded by tons of Rex Fury’s thugs. To get through the icy blasts, you’ll need some protection. Go to the end of the path near the entrance and use the switch to reveal a white LEGO box. Hijack the box like a vehicle and you’ll be able to safely walk through the deadly icy blasts.

On the left side, grab TNT from the vending machine (Miner Disguise) and place it in the barrel. Stand on the big red LEGO button, then push the LEGO pipe down the push-able surface to create a platform to reach the upper floor on the left. 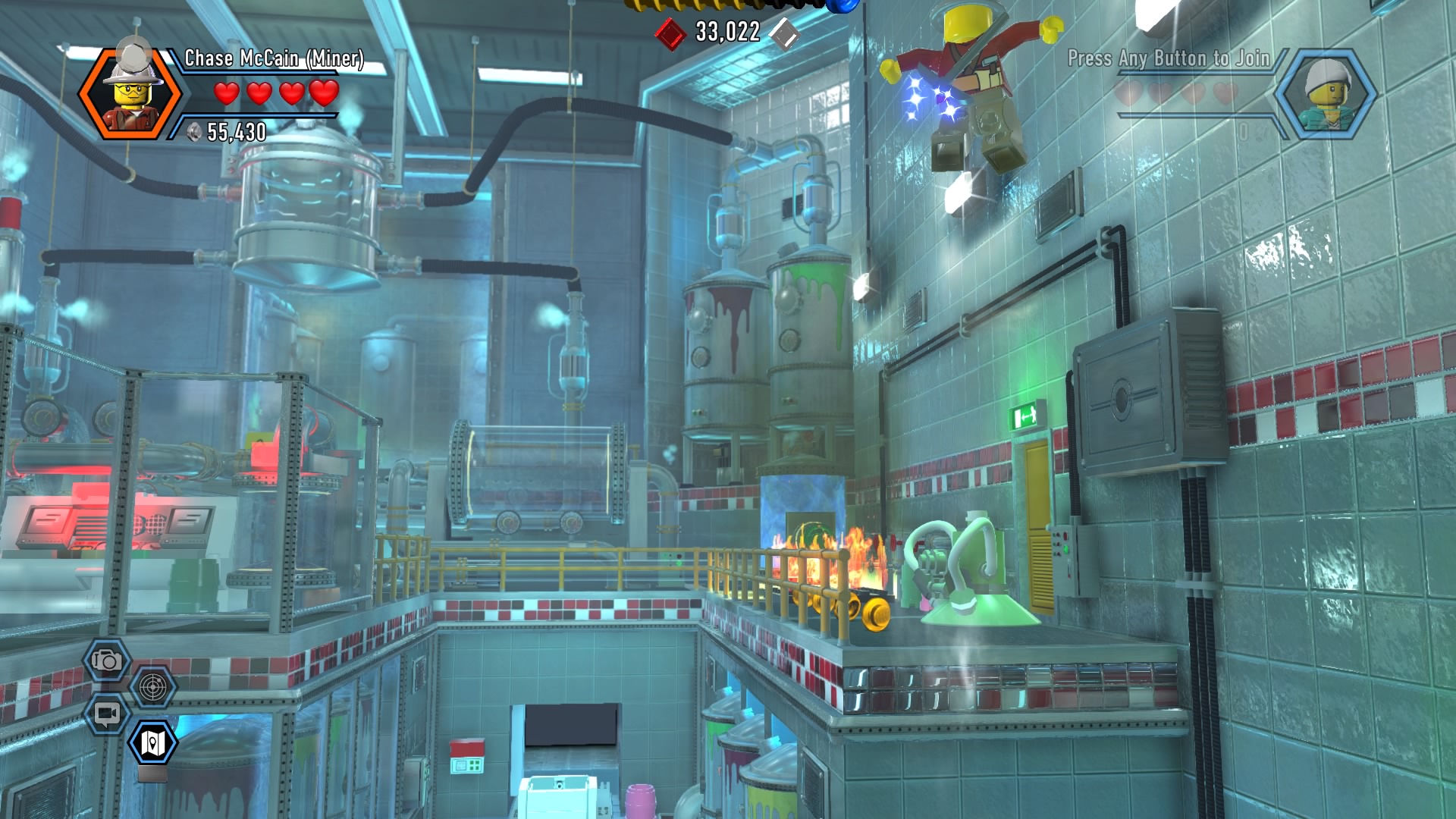 Up on this upper-left walkway, use the green wheel to transfer the red ice cream. That’s one set, but you’ll need more! Still on the walkway, move toward the foreground and push the big LEGO crate down onto the conveyor belt.

Build the bricks on the right side of the room, moved on the conveyor belt, to create a wind tunnel. Ride up and put out the fires on this upper right-hand walkway. Use the wheel here, and all the ice cream will be transferred to the center of the room.

Climb up into the booth in the center of the factory and use the terminal when both vats lights are green. That finishes the last member of Rex’s gang and completes another level!