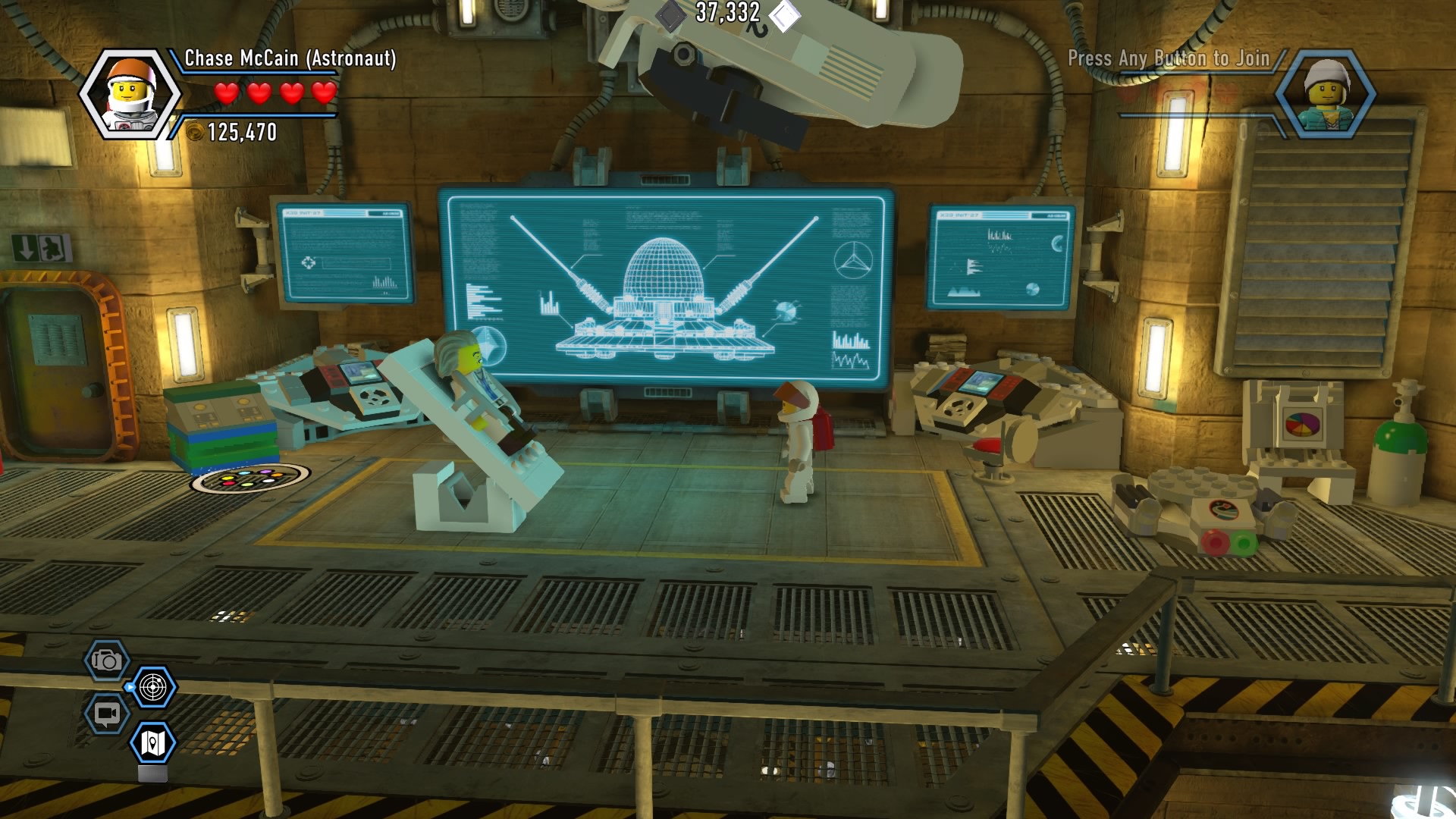 The secrets behind the conspiracy in LEGO City: Undercover are finally revealed in Chapter 13 of our complete walkthrough, showing you have to navigate Blackwell’s underground base.

Chapter 13 is split between two more levels — Blackwell’s massive secret base, and Blackwell’s mansion. Chase is hot on the trail, and he’s finally found out that Forrest Blackwell, the rich benefactor and businessman, has a sinister plot for the planet.

Here, we’re focusing on the Secret Base level. This giant compound is action-packed — you’ll have to deal with super-strong spacesuit soldiers, laser cannons, and a new Astronaut Disguise upgrade. Don’t let the many puzzles hold you back, check out everything you need to know below.

The chapter begins right away! You’re thrust into the hidden base beneath the mountain. Level 13 begins too, so be prepared to fight your way through Rex Fury’s gang. You’re so close to the truth now – an unseen figure is discussing nefarious plans with Rex Fury, including the location for Dr. Kowalski.

Time to save the good Dr. Kowalski from Rex Fury’s secret base. A gang of thugs appear at the loading area. Take care of them. When the goons are arrested, move to the right wall and repair the fuse box (Construction Disguise) to turn off the electricity. Smash the formerly-wired LEGO crate to find a smaller box. Move the box to the green LEGO pad. Build the hopping bricks when you place it – and hit the security switch. 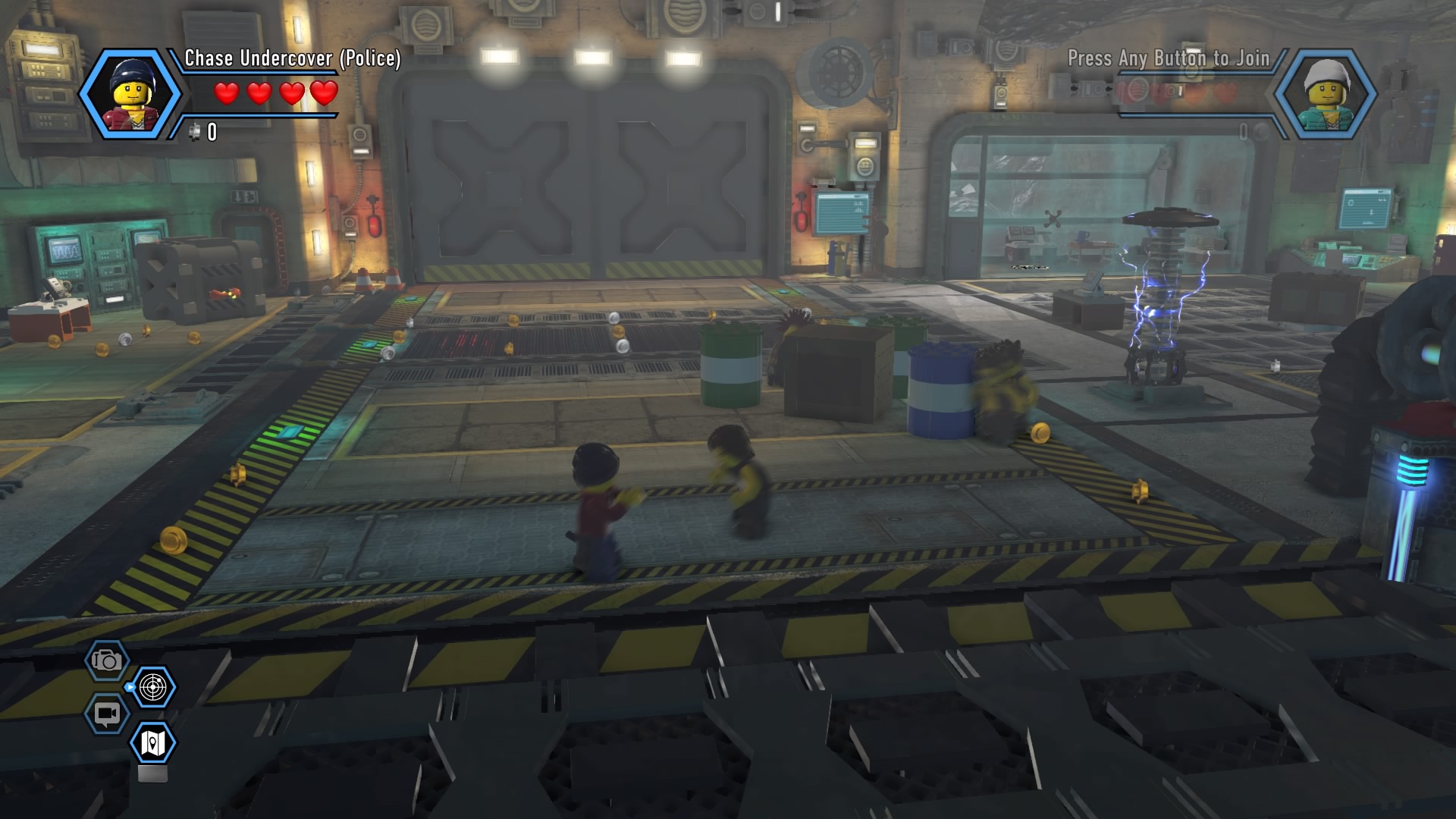 That opens the door to the office. Use the computer inside the glass-encased room to open the main shutters to the massive ledge over a long, long drop. To go deeper into the secret base, go to the overhang through the newly-open door and begin the long drop. Destroy the blue LEGO dish on the helipad to creature a diving board.

Follow the LEGO studs as you fall – there are huge circles that helpfully show Chase where to go. You’ll be able to avoid the platforms and walkways and other obstructions. Falling down the cliffs, keep moving to avoid the incoming laser blasts and avoid the spinning energy in the tunnel. 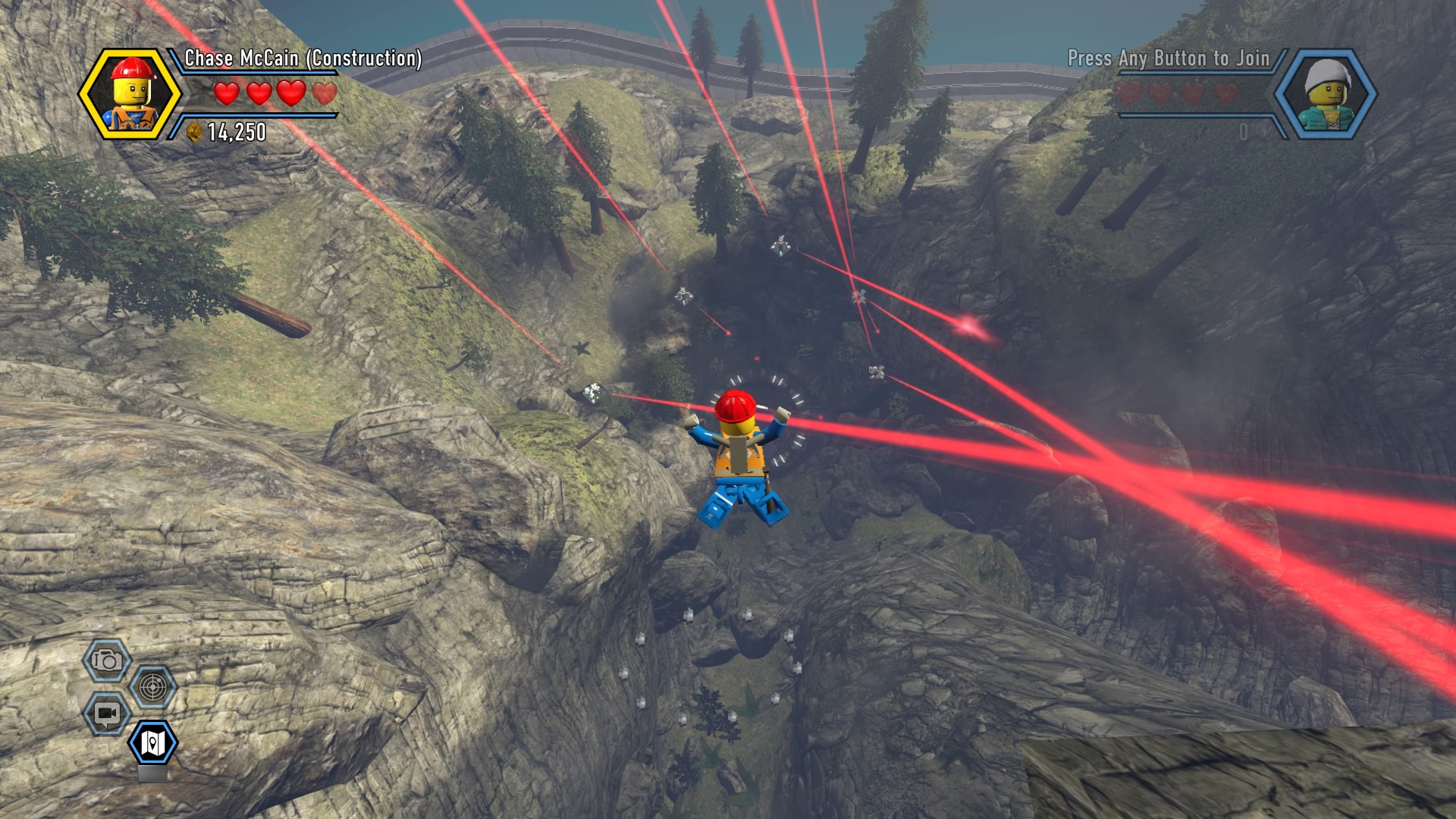 At the bottom of the long drop, you’ll land in a submarine bay. To progress, you’ll need to enhance the large crane in the center of the dock. Start by smashing the large LEGO crate – build the hopping bricks to add extra parts to the crane.

In the far-left corner of the room, use the Space Crate (Astronaut Disguise) to teleport a bundle of TNT. Grab it (Miner Disguise) and place it in the barrel near the shiny metal LEGO crate. Build those leftover hopping bricks to complete the crane – all you need to do is use the controls.

The crane pulls an engine out of the sub. Repair the engine with the Construction Disguise to launch into the huge metal doors. The blast completely destroys the gate, and red-clad spacemen jetpack into the area. They look dangerous, but they can be arrested like any other criminals! 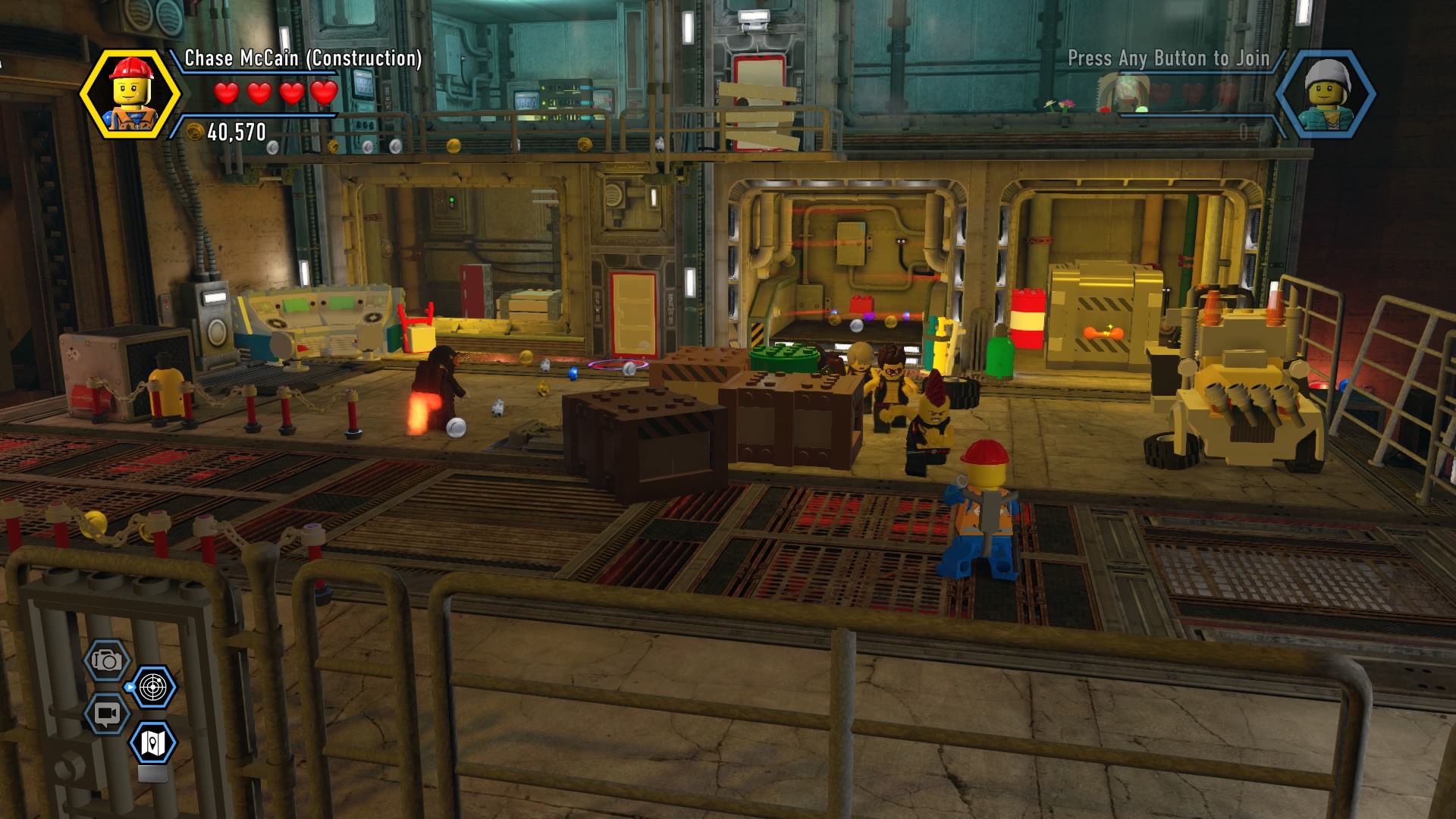 Go through the destroyed door to ride the lift down into the massive underground chamber. Defeat the waiting goons, then break open the door on the back wall (left of the laser grid) with the Robber Disguise. Smash the white / gray LEGO box and construct the bricks inside to create a ladder up to the second floor.

On the second floor, step onto the exterior walkway and cut through (Fireman Disguise) to reach the Color Swapper. Collect green from the Color Swapper and shoot the red light at the top of the previous ladder. That opens a door with a jetpack upgrade. 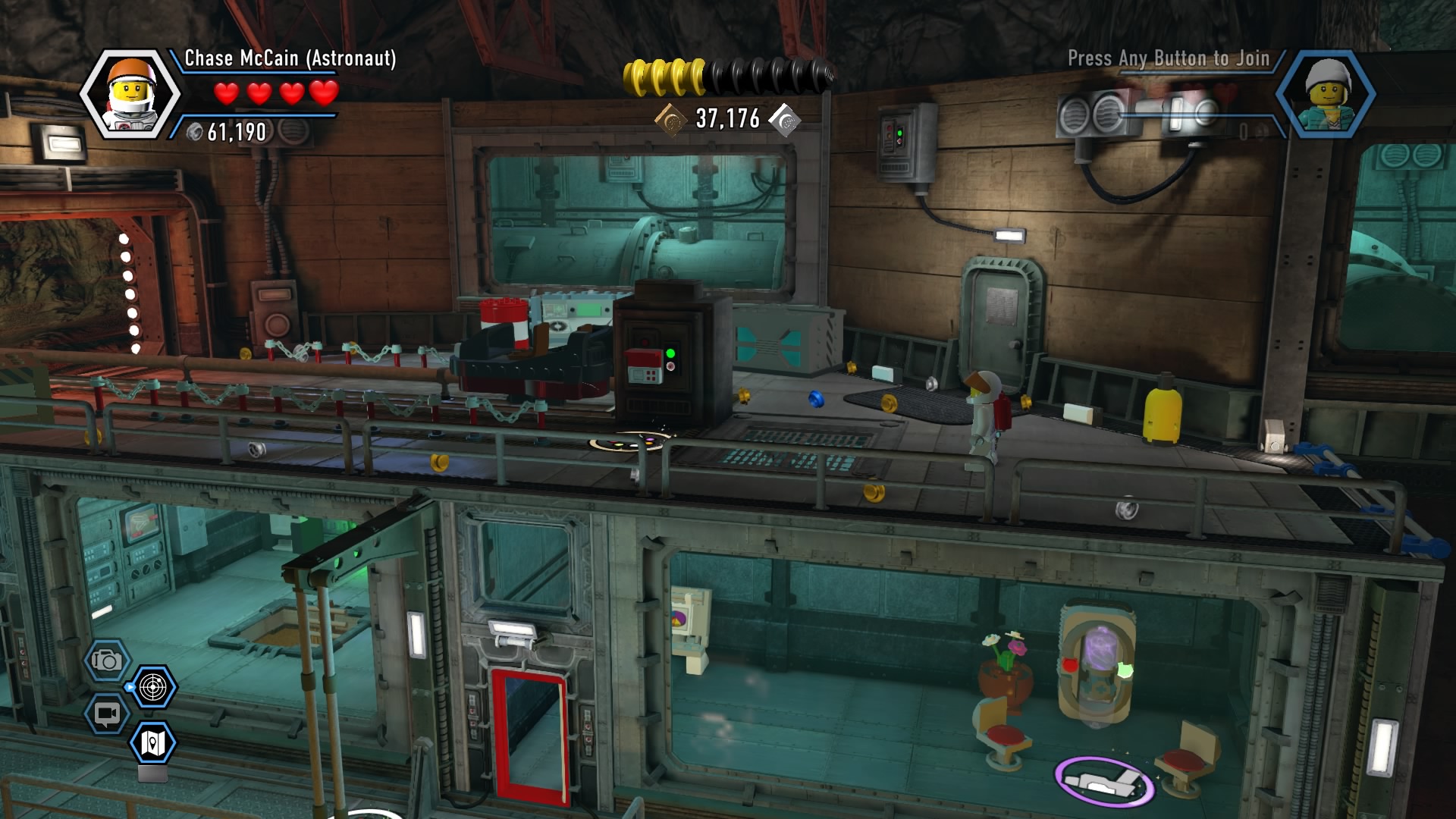 Return to the balcony and use the Super Jetpack marker to fly right and land on the lower walkway. Down here, follow the studs up and back – climb the crates and jetpack up to the catwalk with a ladder. Climb the ladder, then glide into the foreground, then left to reach the third floor.

Use the terminal on the test track to send the little cart into the laser grid. Build the hopping bricks to create a TNT vending machine. Grab the dynamite with the Miner Disguise, then fly back to the top of the ladder you used earlier – there’s a metal LEGO crate you can destroy. Set the TNT to cause all sorts of havoc in the base. When the cutscene is over, construct the hopping bricks and use the teleporter pad with the Astronaut Disguise.

After the teleport, grab the yellow LEGO handle and activate the Super Jetpack marker to hover far right and cross the gap to land on the lift platform. Reattach the handle then activate the switch to drop the cart, making room for another Super Jetpack hover marker. Keep flying right, then defeat the incoming space-thugs. 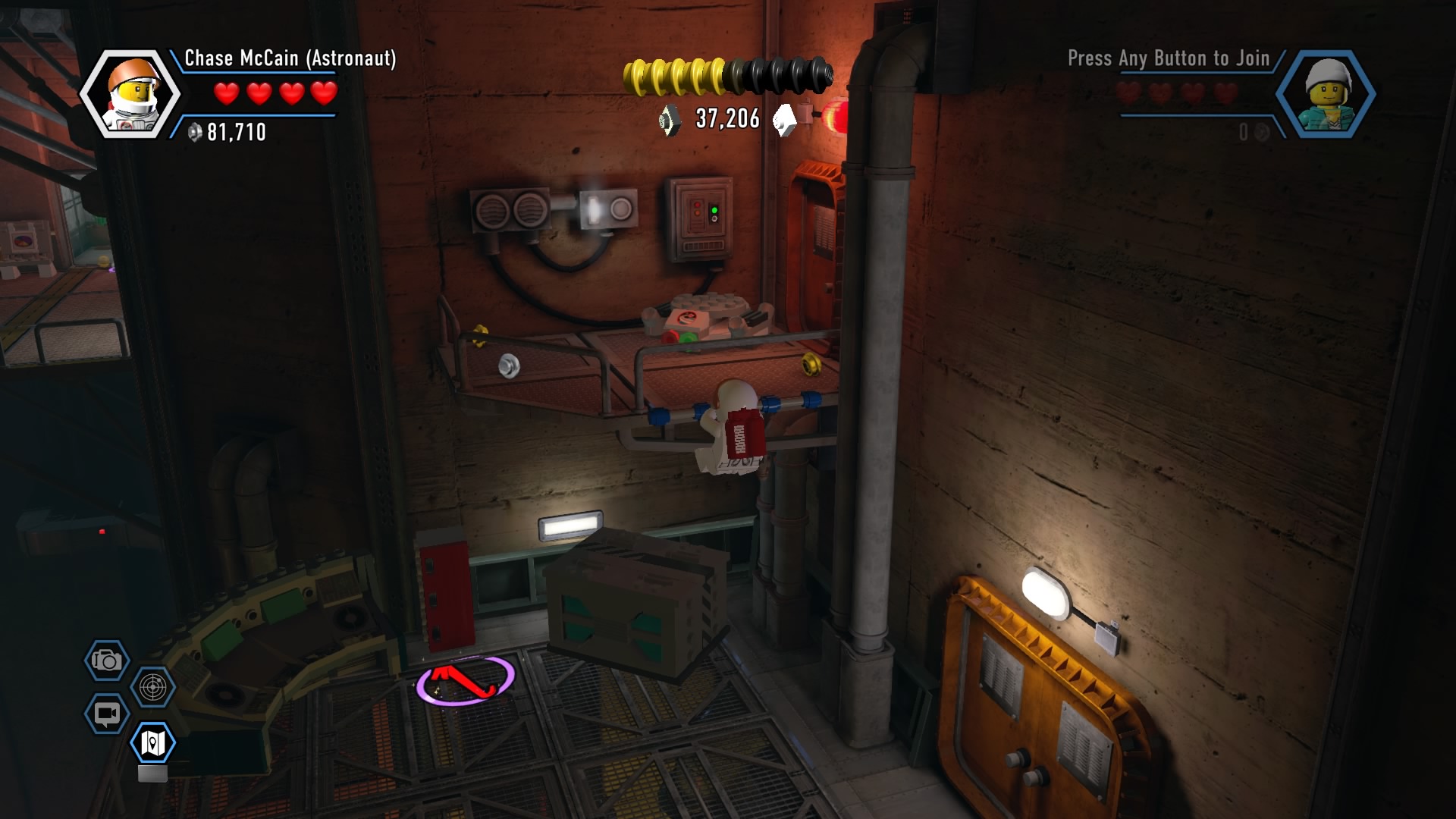 Now that you’re on the right side of the giant cavern, fly up to the blue / white handhold. Bounce up to the high platform and activate the teleporter pad to appear on another level with a barred door and a ladder. Bust open the barred door (Robber Disguise) and repair the fuse box (Construction Disguise) to open the hatch at the top of the ladder. Climb up and use the lever near the hatch.

Using that lever pulls one of the rods from the generator, dropping a platform near the exit doors between the energy cells. Go to the metal catwalk on the left to find a Super Jetpack hover. Fly through the red stud circles to the center platform, use the Space Crate (Astronaut Disguise) and smash the new LEGO box to collect the TNT (Miner Disguise) – place the TNT in the barrel to destroy the exit door. 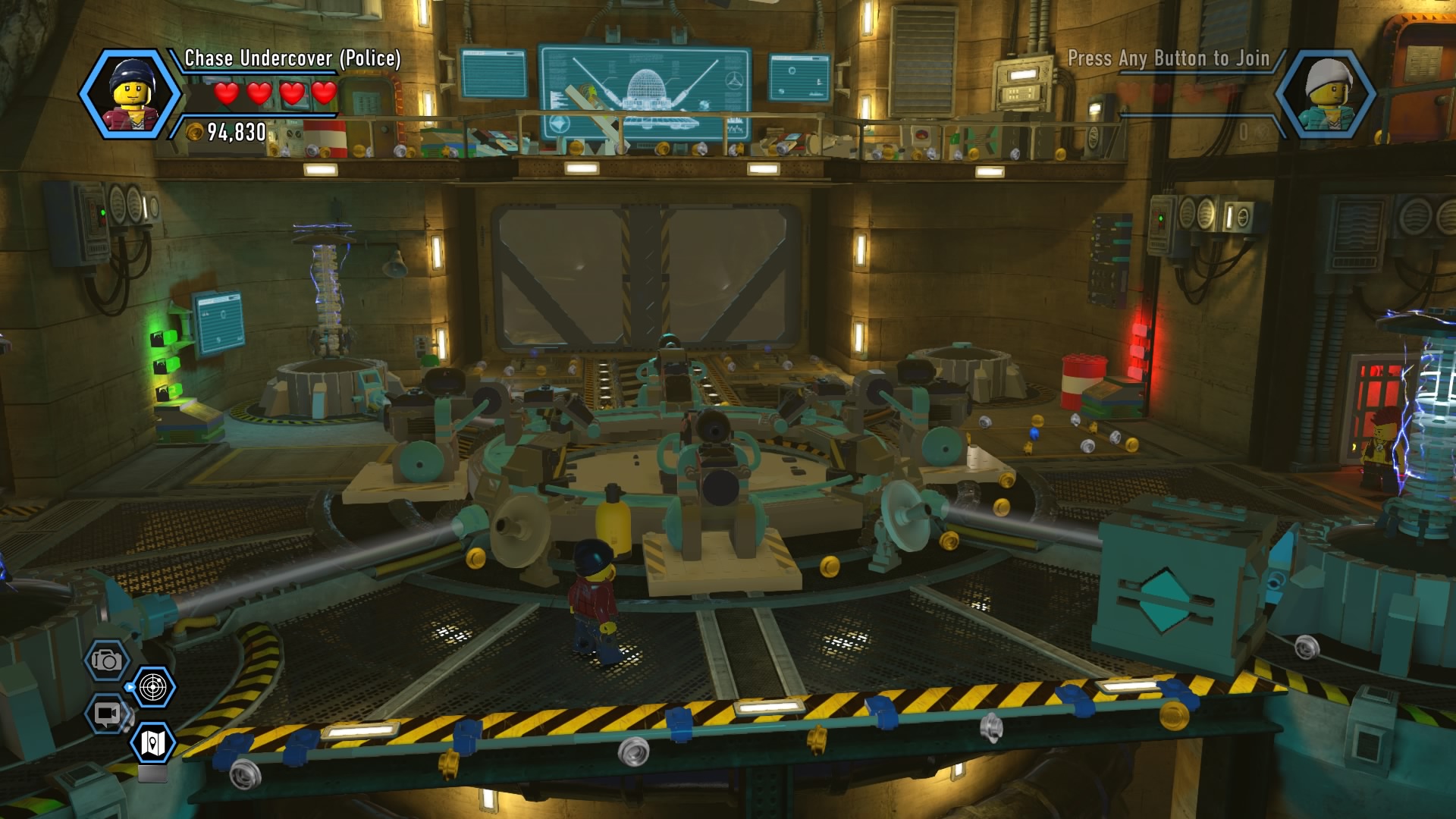 Through the door, you’ll learn the true identity of Rex Fury’s mysterious benefactor. It’s Forrest Blackwell, and he’s captured Dr. Kowalski! It isn’t just Kowalski, he’s also got Natalia as a hostage. Whatever he’s planning, the Professor gives Forrest the code, unlocking his advanced technology. An energy shield appears – what is Blackwell planning?! Whatever is going on, it’s time to rescue the good Professor!

Defeat the thugs to the right, and you’ll find the giant generator machine. Two of the power towers are broken – you’ll need to repair the towers on the back-left and back-right corners. In the back-left, pull the grapple hook and build the hopping bricks, then activate the switch.

For the back-right, go to the right wall (where there’s a barred crowbar door) and smash all the LEGO bricks to find a small crate. Pick it up and place it on the green marker, then build to repair the power tower. Hit this switch too. Now that the towers are all activated, the panel will open to reveal… a flying saucer? 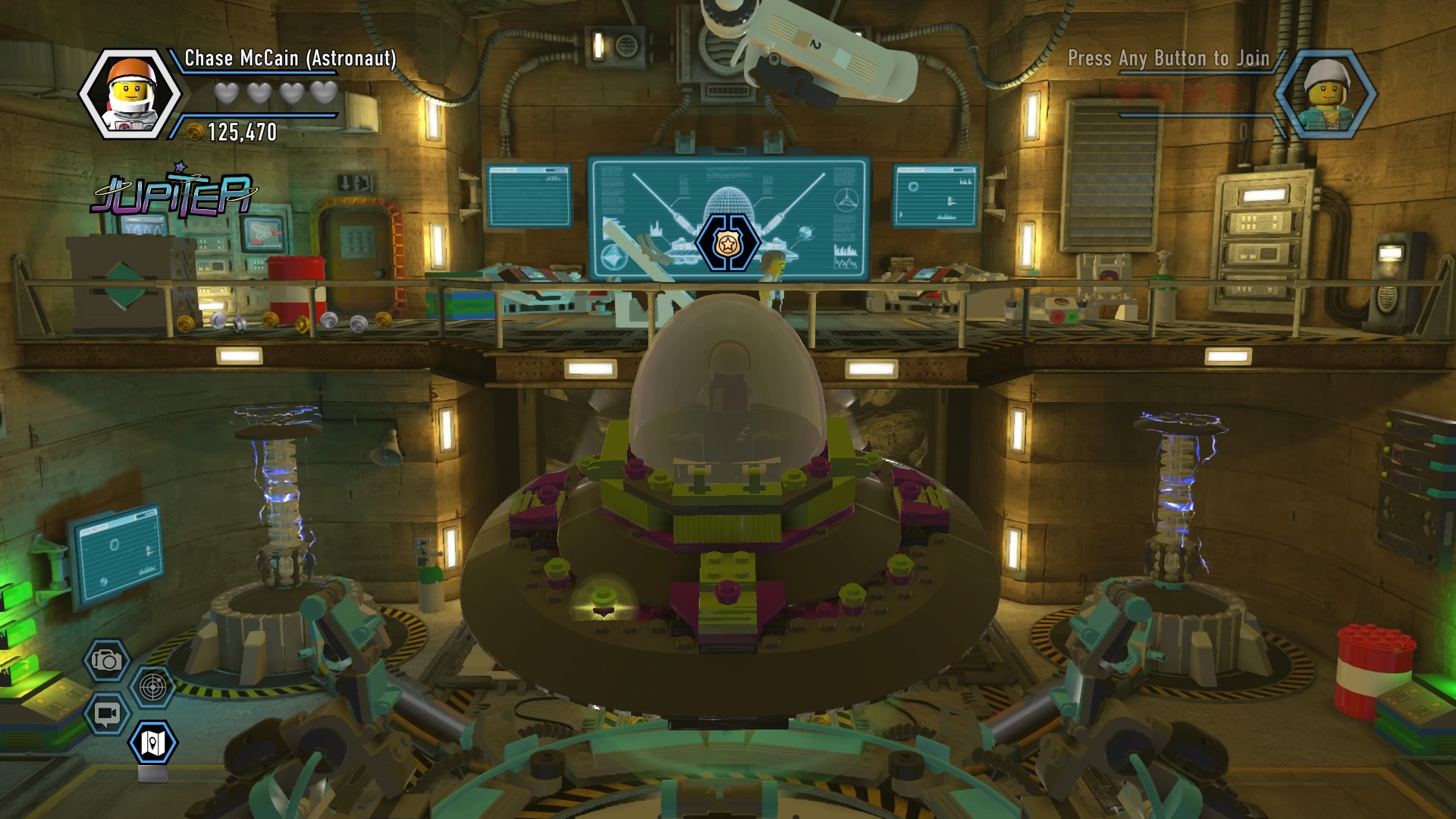 We’ll worry about that later. Use the crowbar on the door on the right side of the room then repair the fuse box (Construction Disguise) to reactivate the fan, creating a strong gust of wind. Ride the wind up to the platform above and break open the crate. Use the teleporter (Astronaut Disguise) and you’ll reach the Professor.

Pull the switch to the left of the Professor to free him. We’ve already unlocked the UFO, so all you have to do now is jump down and enter the UFO like any other vehicle to escape. It’s time to learn more about Blackwell’s evil plot, and stop it before all of LEGO City is destroyed!