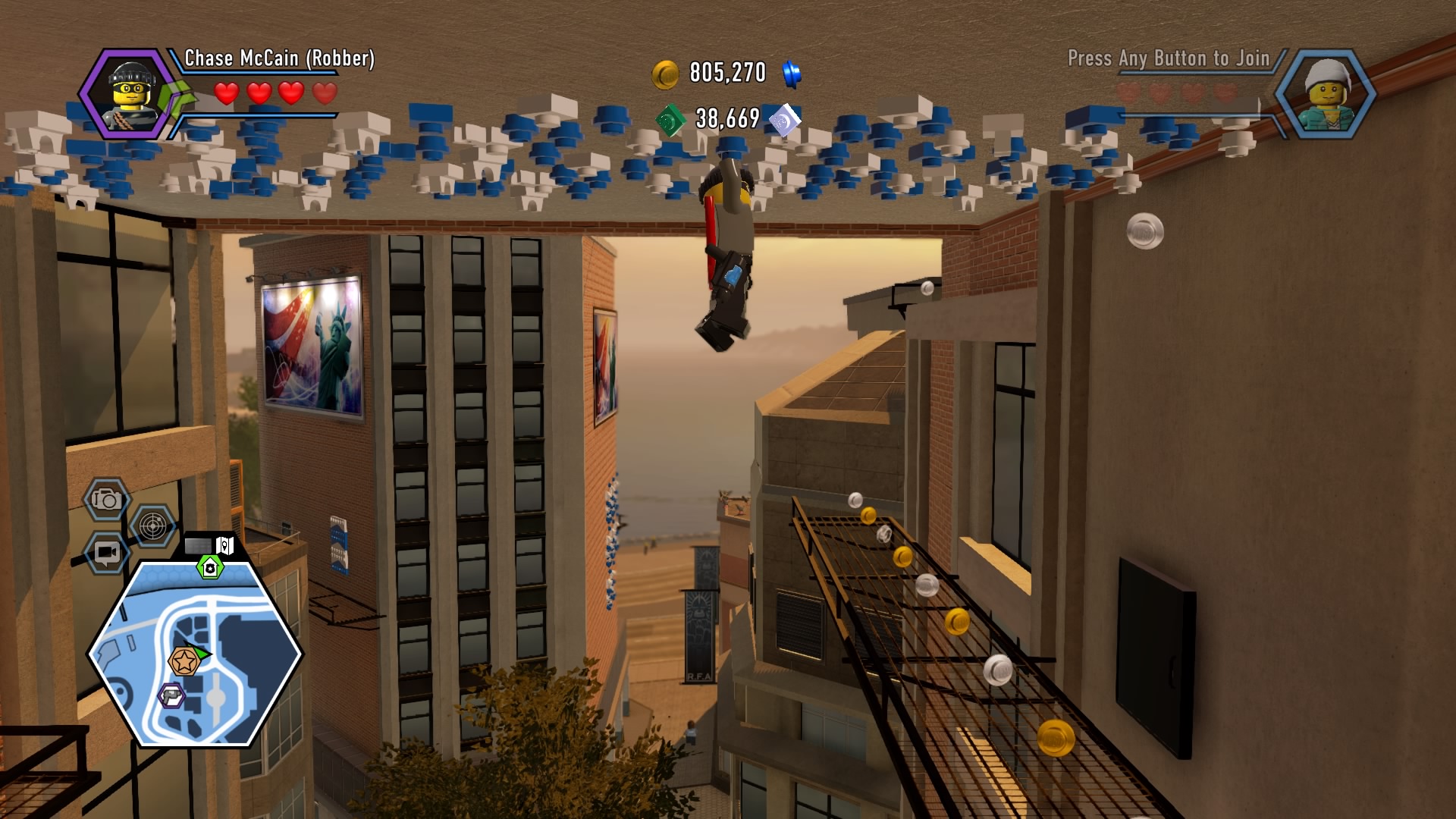 Break into Chan’s Salvageyard and save the day with our guide for LEGO City: Undercover, Chapter 8: The Rescue.

Things are heating up in LEGO City, and Natalia’s investigation into her missing father goes bad when Chan catches her snooping around. Chase, being an undercover cop, can’t risk invading the operation without a disguise — and so enter a new duo of bumbling detectives. Check out the gallery below to get a load of Chase’s fancy new outfit, or browse through the text for help solving all the junk palace puzzles.

With the Moon Buggy delivered to Chan, it’s time to enjoy a little rest and relaxation. Except, as soon as you stray too far from the dock, the Chief will call. Forrest Blackwell is being abducted! Rush to the waypoint downtown to rescue the eccentric old coot.

The shield waypoint is on the roof, but Chase can’t climb up without the blue Color Swapper. Enter the building with the sloped rooftop across the alley – there’s a LEGO crate containing a Teleport Pad at the front entrance. Grab the blue Color Swapper and return to the shield – shoot the white LEGO wall with blue to make it climbable. 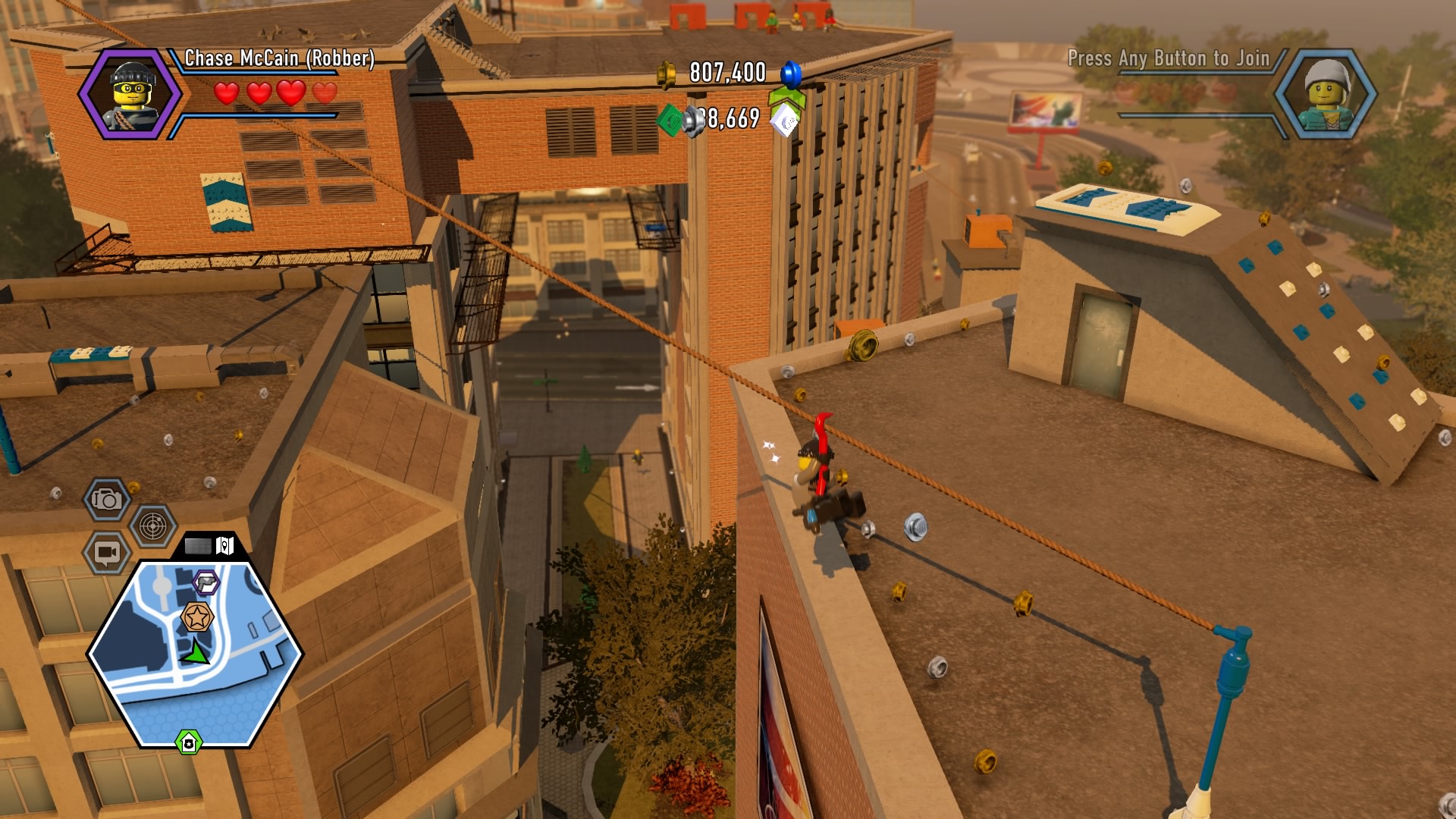 On the rooftops, it’s time to rescue Blackwell. Swing on the poles, cross the rope over the gap, jump the walls and step on the catapult to launch into a combat arena. Defeat the goons, then use the space crate with the Astronaut Disguise. That summons up a bunch of hopping bricks to the left. Build the white LEGO wall and shoot it with the blue color gun to climb up.

Jump over and to the tall pole mast. Shimmy to the top and zip-line to a new roof with a catapult pad. That puts Chase on the rooftop with Blackwell. Defeat all six goons to free him – as thanks, Blackwell will have Chase drive him to the Cherry Hill Police Station personally.

After making the drop-off, and hearing a lot of super-suspicious dialogue from Blackwell, Natalia will call and ask for help. Chase needs to drive down to Pagoda and save Natalia from Chan’s Salvage Yard. 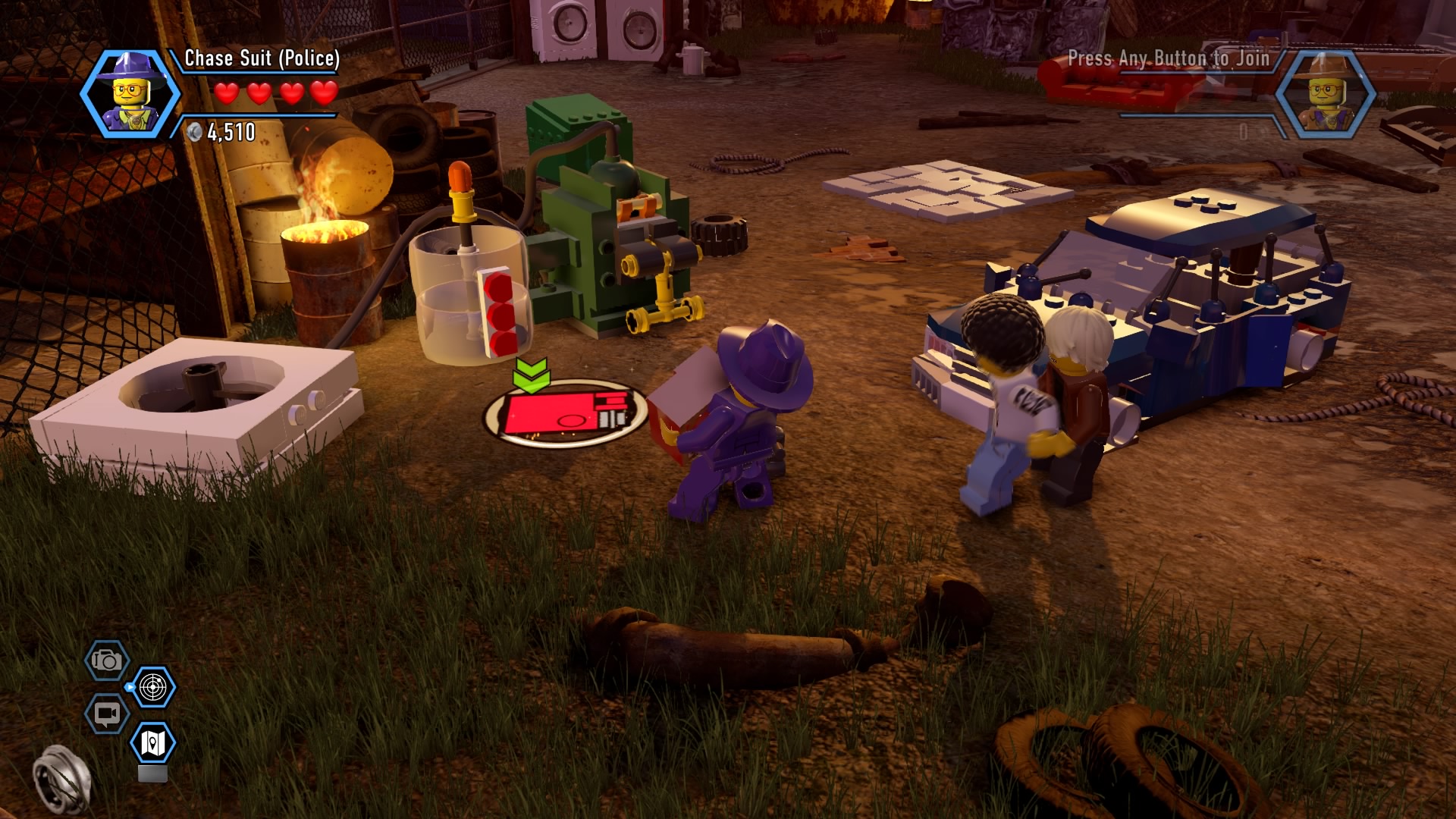 With a little help from Officers Studski and Clutch, Chase gets a brand new (and very purple) disguise. It doesn’t do anything new, but it does keep Chase from getting recognized by Chan’s goons. Speaking of goons, there’s a bunch right at the start of the level. Take care of them!

10k Super Brick: When the area is clear of enemies, find an empty gasoline tank in the foreground. The first gas container is near the tank. Pick it up and full the tank – you’ll need to find two more. The second container is in a LEGO object next to the closed gate on the right.

Continued: The last one requires you to smash a LEGO green object near the entrance. Follow the Detective Scan footprints to find the third container in a LEGO washing machine. When the tank is full, use the switch to activate the fan. Ride the wind up and use the crane controls to drop a 10k Super Brick.

The crane also drops a big pipe! Press [Triangle / Y] to ride it into the basin near the exit gate on the right. 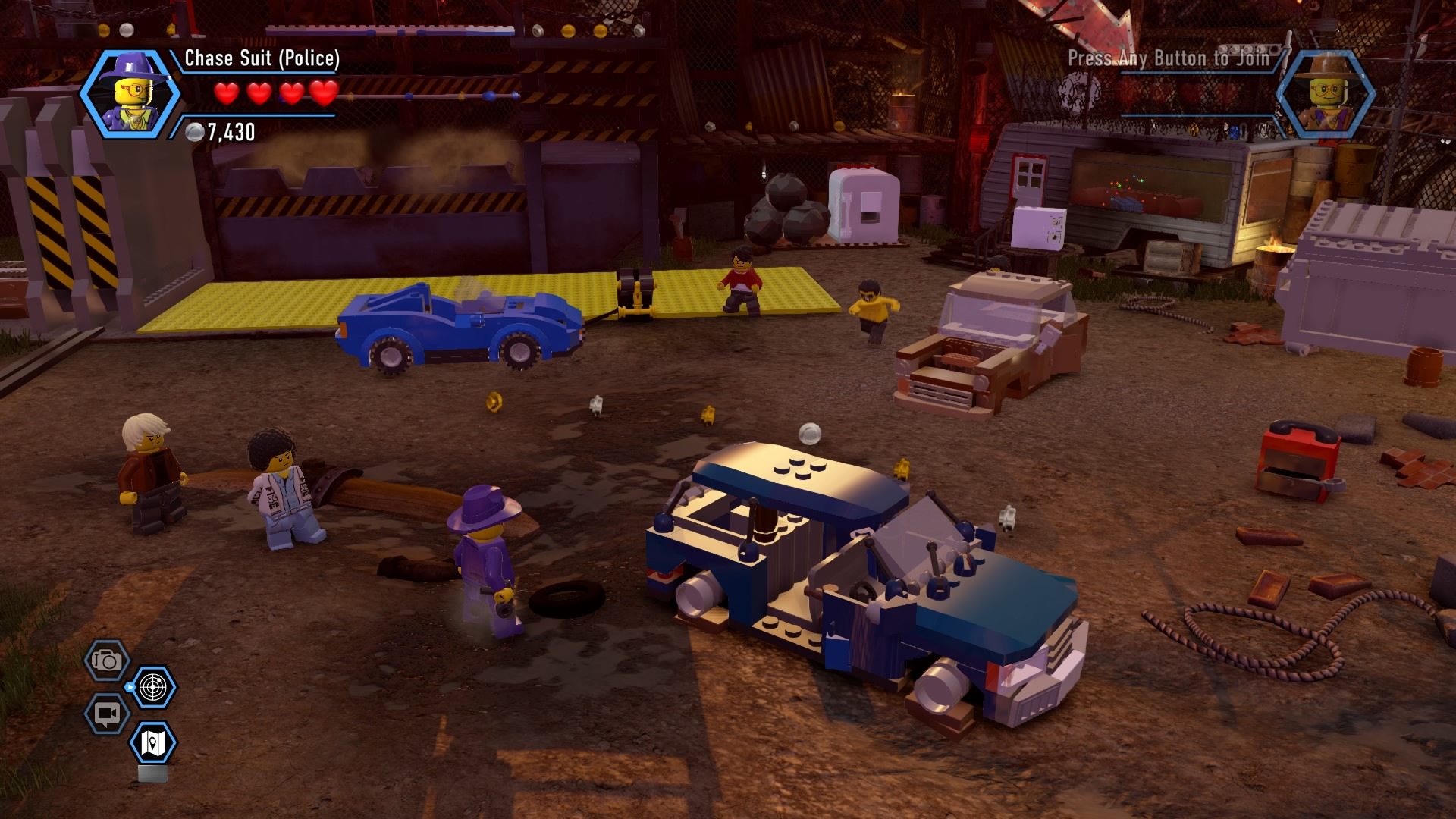 Through the gate, there are more goons – and a giant Super Build platform. You’ll need 21,000 points to build it – and lucky for Chase, we already collected 10k! Another 10k is in the trailer to the right of the Super Build.

10k Super Brick: To the right of the Super Build, smash the boulders with the Miner Disguise behind the dog / trailer. Push the fridge and collect dynamite from the dispenser. Place it in the barrel at the dumpster, then build the hopping bricks to create a dog house. Now you can bust open the trailer door with the Robber Disguise crowbar.

1k Super Brick: Next, pull the blue grapple hook near the lowered gate (foreground) and build the bricks to create a Color Swapper. Keep that in mind and move to the right-foreground area to find blue / white Free Run spots near the water. Hop up and cross the narrow ledge to get a valve. Insert the valve into the slot and turn to raise a red-glowing button. You know what to do now! Grab the green Color Gun and shoot the red light to lower the water.

Police Shield Part: Open the safe in the area where the water lowers to collect one of the four police shield parts.

Now that you’ve got enough Super Bricks, build the car crusher and activate the switch to place a new platform to the left of the giant machine. Follow the Free Run points until you’re above the grinder – watch out for the falling cars! They always fall in this order; right, left, right, left, etc.

Past the grinder, jump up to use the crane switch. It will drop a load of blue / white bricks, meaning they’ll be helpful. Drop down, build, climb up and onto the next room. 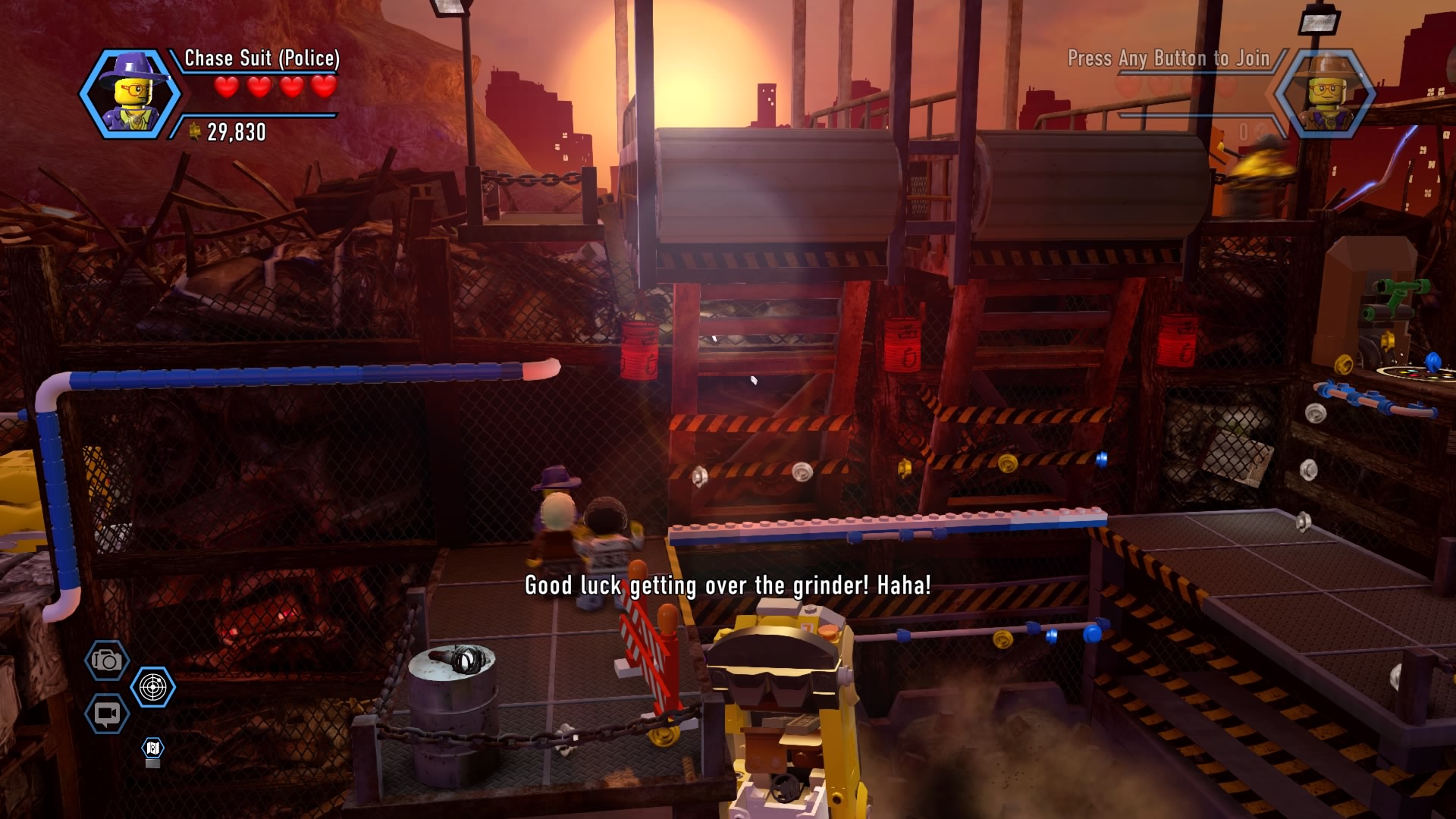 Move right and look to the back wall for a blue grapple point. Use it to pull three cars out of the pile, creating “steps” for Chase to use. Jump up and move left, dropping into the donut hole to find a crate. Smash the boulders with the Miner Disguise. Place the crate on the right at the waypoint, then build to complete one section of the old car.

There’s still more to do. In the foreground from the green truck, there’s a manhole. Lift it up with the Miner Disguise and grab the TNT. Jump on the faded old car to the left and across the poles and bomb the LEGO plane crash. Construct the bricks that hop out and use the teleporter to move forward.

In the new area, defeat all the enemies that have you surrounded to spot Natalia hanging from the crane. She needs help – climb the pipe to the back-left of the enclosure, near an old locked door. Move right, wall-run and jump to reach the crane controls. Using the crane like a vehicle will save Natalia and end the level.