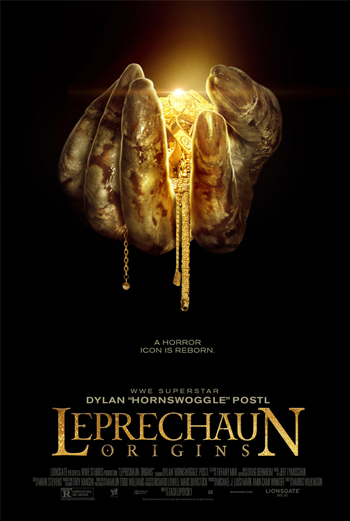 WWE Films (currently riding high on the surprise success of its haunted-mirror flick Oculus) has released a teaser poster for it’s long in-development feature Leprechaun: Origins, a reboot of the Leprechaun horror franchise being launched as a star-vehicle for WWE contract-player Dylan Postl, better known by his pro-wrestling moniker “Hornswoggle.”

The original Leprechaun (best known for co-starring a pre-Friends Jennifer Anniston) was a low-budget horror spoof starring Warwick Davis as a vengeful Irish demon who stalks and murders a group of young people who steal coins from his magic pot of gold and can only be destroyed by a four leaf clover. The film became a surprise cult-hit in 1993, eventually spawning an impressive five sequels (all featuring Davis in the title role) including “Leprechaun 4: In Space” and two urban-set installments, “Leprechaun in The Hood” and “Leprechaun: Back 2 Tha Hood.”