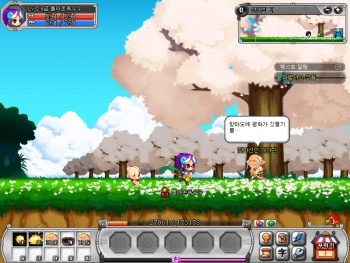 Now you can perform one horribly mind-numbing and time-consuming activity – learning Chinese characters – by doing another one: playing a MMOG.

So it makes perfect sense that someone would actually combine the two activities. Hanjamaru, a Korean MMOG developed by NHN and EduFlo, is designed to help people learn Chinese characters via an audio-visual teaching system. Supposedly, Hanjamaru combines character-learning into its battle system. The system was tested and designed with the help of scholars and educational psychologists at Harvard.

And it seems to work, judging by the results from the test phase held in January. By playing the game, the 26,000 participants on average were able to learn 13 characters per hour. Having studied Chinese plenty, I’d say that’s about as fast as I’d be on a good day (and those were few and far between). Unsurprisingly, the game was most effective on youngsters (10 or younger), 78% of whom have seen their ability to learn characers increase.

“It seems Hanjamaru brings interest to the users, and leads to natural education by going through repetitive routine,” Kwon Su Yeon, a parent who tried Hanjamaru with her kid, said. “I hope it will be a nice teaching method for children to learn Chinese characters while having fun.”

“Hanja” is the term for Chinese characters used in Korean, sort of like Kanji in Japanese. So, for now, the only characters in the game are the Korean Chinese ones, which, being mostly based on traditional Chinese, are actually more complicated and harder to learn than the standard simplified Chinese ones. However, Hanjamaru will eventually add both Japanese Kanji and Simplified Chinese later this year.

Unfortunately, the educational use of the game probably doesn’t mean much to anyone outside of South Korea, so, sorry Chinese language learners in the West. Guess you’re going to have to get back to grinding.