The new Magic: The Gathering set Journey Into Nyx kicks off for a prerelease weekend at local game stores everywhere April 26th and 27th. Journey Into Nyx will conclude the Theros block, and includes a few new and interesting mechanics. Journey into Nyx is a set of 165 cards. With the full card set of Journey into Nyx now known to us, the experts in our Magic column Hexproof have taken the liberty of breaking down the best and worst cards in the set for you.

The storyline of Journey Into Nyx highlights final hours of the story on the plane of Theros, where where the gods have sent their forces against mortals to punish their hubris. Theros is a plane inspired by Greek mythology, filled with heroes and monsters like Hydra.

There’s also a Journey Into Nyx trailer, which you can watch right here, featuring animated versions of much of the card art: 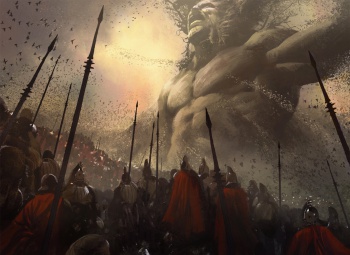 Here’s the list of official dates and details for the set’s events.

In other recent Magic: The Gathering news, we learned that the special designer cards for Magic 2015 includes cards by video game personalities like Minecraft‘s Notch and Plants vs Zombies creators. Further, we got our first look at computer game Magic 2015 – Duels of the Planeswalkers, which finally includes custom deckbuilding.