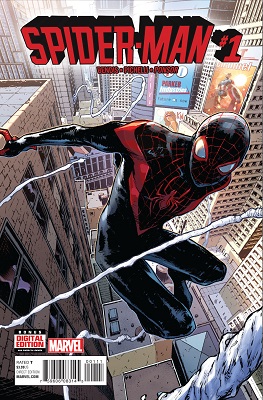 While the Peter Parker of Marvel’s now destroyed Ultimate universe was widely loved, it was his replacement, Miles Morales, that really caught comic readers’ attention. Multi-ethnic and wonderfully written, he became an instant hit among Spider-Man fans. Few were surprised, in turn, when it was revealed that Mr. Morales would be among the Ultimate continuity’s survivors when Marvel’s worlds combined at the end of Secret Wars.

Intent on continuing the fan favorite’s adventures, Marvel will be launching a new series starring Morales this February. The simply titled Spider-Man will follow Morales as he continues his career as a super hero in the new combined universe. Hoping to give fans a sneak peek at the new book, Marvel has released a cluster of variant covers and preview pages from the opening issue. In addition to showing off Morales in his role as Spider-Man, the pages also show him contending with the ever-challenging balancing act that comes with the dual life of a costumed hero/high school student. The new comic will debut on February 2nd, and be written by Brian Michael Bendis with Sara Pichelli handling the art.


Speaking personally, this new series is the one I’ve been waiting for. I was a huge fan of Ultimate Spider-Man in all of its forms, and while I was initially skeptical of Miles Morales, I eventually fell in love with the character and his web-slinging story. While I’ve heard good things about the new Peter Parker-centric Amazing Spider-Man series, I’m leagues more interested in seeing where Bendis takes Morales next.

Who Will Be Cast as The Young Han Solo For the Upcoming Film?