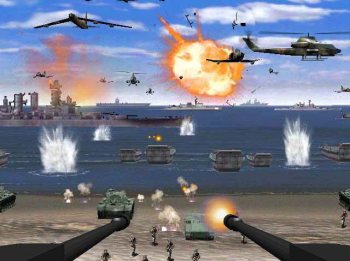 And the Massachusetts Department of Transportation has removed several “violent” arcade games from its turnpike service areas.

The town of Southington, Connecticut pulled the plug on its plans for a violent videogame cull earlier this week, but now the town of Melrose, Massachusetts has unveiled plans for a videogame turn-in of its own. Called “New Year – New Direction,” the initiative will allow families to exchange violent videogames, movies and toys for a sheet of coupons that can be used at local businesses, and possibly a “get out of homework free” card as well.

“If a family has this discussion and maybe tries to get rid of some of this stuff, they are going to get one of these coupons. The child may be getting rid of something they like, but they are getting some value for it,” Melrose Mayor Robert Dolan said. “I’m not saying people shouldn’t have [violent games and toys], but, at least in my house, things have changed since Connecticut.”

Meanwhile, Massachusetts state authorities also decided to remove several arcade games, including Time Crisis and Beachhead 2000, from turnpike rest stops following a complaint from a family who witnessed someone playing one at a stop near Newtown, Connecticut, the site of the Sandy Hook massacre.

“You could even hear it in the bathroom,” the complainant, Andrew Hyams, told the Boston Globe. “People have the freedom to have whatever videogames in their own homes that they want. We were struck by walking into a [state-owned] rest stop within an hour’s drive of Newtown and seeing and hearing a life-sized, mounted machine gun on a videogame.”

Following their complaint, the Massachusetts Department of Transportation pulled nine machines from four separate rest stops. “A videogame in a public space could be used by anybody of any age,” Transportation Secretary Richard Davey said. “At the end of the day, those games are there to entertain kids, probably for a few minutes, while their parents are resting from a long trip. I just think it makes all the sense in the world to have it be a more passive” game.