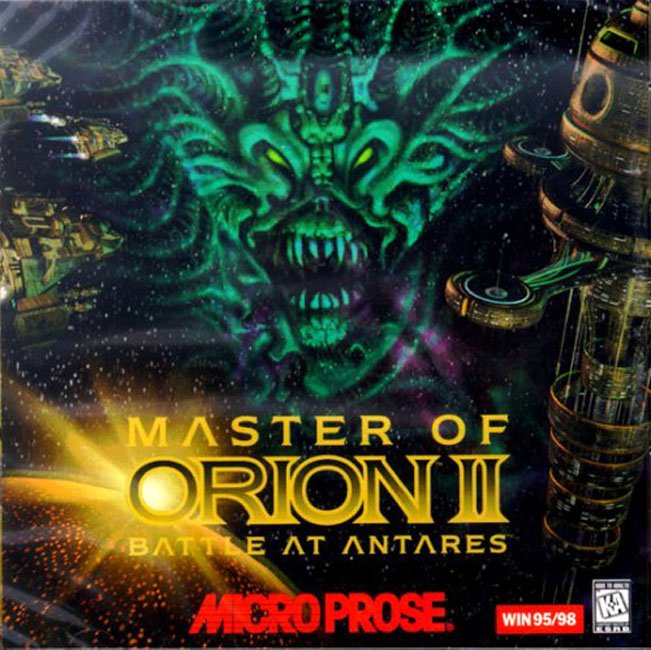 Originally released in 1996, Master of Orion 2: Battle at Antares puts players in the role of futuristic governor tasked with leading their race to dominance in a contested sector of space. One of the most revered 4x strategy games ever made, we look at it now to see if it’s still the classic you remember or if it’d be better left in the nearest black hole.

So I’m terrible at Master of Orion 2: Battle at Antares. Don’t get me wrong, it’s not that I didn’t make a sporting try of it. Things just seemed to keep going wrong. For instance, I had some issues with hostile cat aliens. I’m assuming their enmity was grounded in all of the Kilrathi (a distant cousin perhaps?) I killed while reviewing Wing Commander 1 and 2 last year. Whatever their reason, my first three attempts at establishing myself as an intergalactic conqueror ended with furry, whiskered invaders crushing my fleets and capturing my planets.

I fared a bit better in later games but the end result was pretty much always the same. I’d be progressing along, thinking I was doing well and then I’d say or do the wrong thing and suddenly find myself barely holding off hostile aliens seemingly endowed with a much firmer grasp on the game than I had.

Despite these constant setbacks, defeats and (let’s be honest) embarrassments however, I found myself, time after time, happily clicking New Game so that I could try again. There was never any inclination on my part to quit. And trust me, there were some pretty hefty temptations available. I had inFamous: Second Son sitting next to me on my desk, all fresh and shrink-wrapped, and it never occurred to me to take a break and give it a try. Put shortly, Master of Orion 2 was just too damn good to walk away from.

I’ll admit to not being surprised. I’m only a casual fan of 4X strategy titles, but even I’d heard of Master of Orion 2 and knew of its reputation as an exemplar of the finest that the sub-genre had to offer. The only reason I’d never given it a try prior is the fact that I already had a 4x space game I was satisfied with: Space Empires V. That being the case, after sinking some decent hours into the game I feel comfortable saying that it’s probably one of the best I’ve played. Even if it routinely clobbered me.

For those who haven’t heard of it, the long and short is that you choose one of 13 races (14 if you customize your own) vying for control of a sector of space and lead them to victory. Winning the game isn’t just a matter of building up a big fleet and taking over every planet in the galaxy, however. While that is an option more diplomatic players can pursue victory by making friends and winning an election. Insane players, meanwhile, can try and beat the Antarans, a powerful race of marauders that generally wipe the floor with anyone dumb enough to fight them.

Actually achieving these victories, in turn, is primarily a process of planning and making smart choices. Granted, you’ll also need to master the game’s take on resource management. That said, that part of the game isn’t all that hard and, honestly, the ability to balance your interstellar checkbook doesn’t to amount to much if you approach the game without a consistent strategy. I’m pretty sure that many of my early failures, for instance, could be blamed on the willy-nilly approach I took toward my goal of galactic dominance.

I knew from the get-go that I wanted to play like a conqueror. When it came to actually striving toward that end however, I made a slew of rookie mistakes. When it came to picking my race, for instance, I did what I always do: I picked the humans. The problem is that the game’s take on humanity is much more naturally equipped for diplomacy. Making matters worse, I made several bad research choices that left me at an early disadvantage that I never really recovered from. My feline foes the Mrrshan, meanwhile, came with a +50 Ship Attack racial bonus that was only bolstered by tech choices that left them equipped with weapons well above what I could bring to bear.

The fact that you can’t research every piece of tech (unless your race has the “creative” trait) also adds to the importance of thinking your decisions through. The game’s tech tree is split into different schools of research that, at each new level, lets you choose one piece of technology out of two or three choices. Once you pick one the other options can only be accessed via trades with other races which, like much politics in general, can be something of a double-edged sword. Case in point, during my second playthrough, I tried to make nice with the Mrrshan. They wanted one of my advanced war techs and I needed one of theirs. We exchanged research and ten turns later they attacked me with a fleet of ships I can only assume were equipped with the Battle Pods I gave them. In hindsight I probably should have gotten a non-aggression treaty before giving them those.

My moments of gradual improvement, in turn, came after I actually took the time to pick my race wisely, carefully consider what I was researching and take more care with who I was dealing with and how I handled our relations. As I’ve already said, I still never really became all that good at the game. Even so, I came away from it with this sense that if I’d had more time to keep at it that I’d eventually ascend to a level of competency where not every one of my playthroughs ended with the game over screen.

I also think it would have been interesting to see if there was ever a point where I became sick of the game. That might seem an odd thing to say considering the whole “one of the best games I’ve played” bit from earlier, but there were elements of Master of Orion 2 that I could picture becoming a tad tedious. The combat, for instance, can sometimes get a bit sloggy. I still liked it for sure, but space battles, especially those involving large fleets, could sometimes slow down to a grinding pace. Granted, there is an auto option that allows the computer to take over your units and speed things along, but I, unfortunately, never really became comfortable with letting go of the reins just for the sake of convenience.

There are other bits of tedium as well, though I blame them less on the game itself and more on the nature of the genre. I don’t think I’ve ever played a 4x game where I didn’t spend exorbitant amounts of time waiting for things (ships, construction, research) to finish. Likewise, you will sometimes get caught up in bouts of extended micromanagement that only get lengthier as your empire expands. Honestly though, those elements didn’t really bother me much. I just view it as being the price for the great fun I was having with the game as a whole. Even so, I know that there are gamers out for whom this could be problem, so it merits mentioning.

To its credit though, the game makes some really decent efforts to combat those moments of boredom. Unless you disable them, you can count on a fairly regular random events breaking up the humdrum of the turn-after-turn routine. Faux news stories will occasionally pop up to clue you in on events around the galaxy and even just the basic act of exploration will sometimes lead you to bonuses and challenges outside the norm. Individual planets might contain special properties (gold deposits, natives) to make them more valuable. Or, in some cases, you’ll send a scout to a star system just to have it destroyed by some powerful space monster or an ancient technological guardian that you’ll naturally develop an urge to take down.

Then, of course, there are the aforementioned Antarans. A vicious race of raiders from another dimension, their appearance is always a source of tension and frequently a game changer. Armed with ships and weapons generally well beyond anything you can field until late in the game, it’s often nothing short of disaster when they set their sights on you. In one game, I was probably in the best spot I’d ever been in. I had a bunch of nicely developed colonies and a sizable war fleet that I preparing to launch against my closest neighbor. Then the Antarans warped in and headed straight for my territory. I sent my ships to intercept and, a few turns later, I had no ships. A few turns after that, I had one less colony. In one fell swoop they had undone a good chunk of my work.

Thankfully, the Antarans are an optional part of the game. You can simply click them off before you start if you don’t want to have to deal with them. Even so, their presence is a perfect example of what I loved most about Master of Orion 2. I couldn’t even begin to fathom how I’d ever get strong enough to beat the Antarans. That said, I left the game very much wanting to find out. I felt like I’d just barely scratched the surface on an experience that just kept getting better and deeper the more time I invested in it and, despite my many defeats and the call of next week’s game, there was a part of me that really wanted to ignore it all and keep playing. Put shortly, if you’ve played Master of Orion 2 before, play it again. If you’ve never tried it, go to GOG and buy it now.

Next week we move away from turn-based strategy and into the realm of real-time with Stronghold HD.