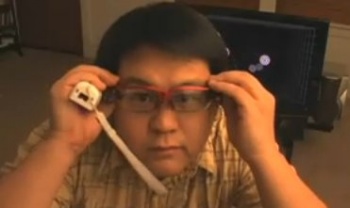 Johnny Lee, the genius modder who gained some YouTube fame for conjuring up hacks like Wiimote head-tracking for VR displays and Wiimote finger tracking, now has a deserved job developing games hardware. But it’s not with Nintendo.

When I first saw Johnny Lee’s videos on YouTube, the first thing I thought was “this guy has the most Asian name ever.” The second thing was “Nintendo needs to hire this guy ASAP.”

If Nintendo did actually try to scoop up this former grad student and researcher at all, they clearly didn’t act quickly enough. Lee, whose homemade projects in modding the Wii Remote gave rise to hacks of jaw-dropping sophistication like head tracking in virtual reality displays, is now officially a Microsoft employee.

Lee’s projects usually focused on tracking motion in real-life with surprising precision on machines, so he’d seem like a natural fit for Nintendo, but maybe even moreso for Microsoft’s recently revealed Project Natal. So it makes sense when he writes on his blog that he’s now working on how to bring Natal “from the E3 stage to your living room.”

Sure, he does have to tow the company line now, but considering this guy was at Carnegie Mellon studying “interface and sensing technology for nearly 10 years,” I’d say there’s some weight to what Lee says when he declares that Natal is “an astonishing combination of hardware and software.”

Lee likens Natal’s 3D sensor to “very expensive laser range finding systems but at a tiny fraction of the cost.” What really gets him excited, though, are the algorithms Microsoft has developed for interpreting the data read from that sensor, which he claims “are well ahead of the state of the art in computer vision” and rival or exceed “anything that I’ve seen in academic research, never mind a consumer project.”

“We would all love to one day have our own personal holodeck,” Lee said. “This is a pretty measurable step in that direction.”

Your First Look at the New Zelda