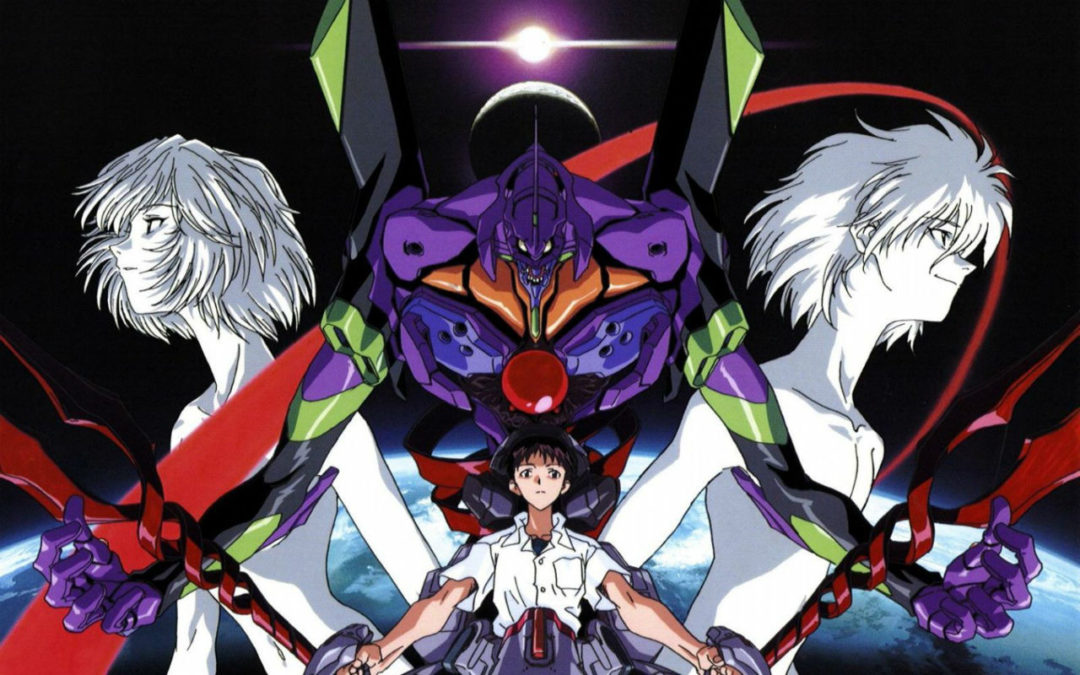 “Fighter planes and battleships have a simple, unadorned beauty I’m drawn to,” said animator and Neon Genesis Evangelion director Hideaki Anno in a 2014 interview with The Japan Times. He was explaining why he voiced World War II-era fighter jet designer Jiro Horikoshi in Hayao Miyazaki’s The Wind Rises. “But I don’t want to see them in action, killing people.”

That’s an ironic statement given that Anno created the gruesomely violent Neon Genesis Evangelion series. He implies that a beautiful machine is virtuous, divorced from the human touch that made or operates it. It’s not the machine hurting people — it’s the person inside it hurting people. In modern mecha stories, that’s no longer necessarily the case. Neon Genesis Evangelion and its cultural offspring like Pacific Rim make it very clear that pilots feel exactly what their mecha “feel” in combat, making the two a combined unit. They feel the impact of a monster tackling them. They feel it when they collapse in defeat.

The visual language for a physical man-machine interface isn’t exactly new. Classic Star Trek is infamous for scenes of the Enterprise deck shaking after being hit, causing the entire crew to dramatically fall or stumble in place. In Mobile Suit Gundam, during Amuro and Char’s first battle, Amuro becomes concerned with the “people inside these machines” before screaming after his mecha is shot in the arm. This scene conveys the fear Amuro feels while in combat with his mech, shifting between shots of him trembling inside the cockpit and the Gundam pointing its gun at Char. It’s a primitive, but important early example of how this cockpit-shot of the mecha pilot character will be utilized later in anime.

Jump forward a few years, and we can see the same technique used in 1990s anime, most notably in Neon Genesis Evangelion. In Anno’s series, teen mecha pilots writhe and scream as the camera shakes while their giant man-killing machines are hit by lasers. This visual coding succeeds at making it seem like the machine and human pilot are one living, breathing organism. This symbolic act of tossing and twisting not only represents a literal struggle with pain, but also an internal turmoil expressed strictly through the exhausted sinews and synapses connecting pilots with their ship. The essential “brain” of the mecha, the pilot, acts as the receptor of pain, sharing it with their mechanical counterpart.

The Eva is not just another war machine, though. In episode two of Evangelion, main mecha Unit-01 is stripped of its purple plating revealing that the Eva is actually made of flesh — it’s a cyborg with a cockpit lodged inside its spine where a teenage pilot can control its every move. In episode 20, the rest of the Eva unit’s exposed carapace is revealed. Covered in bloodied bandages, it looks like a severe burn victim. This moment is surreal and uncomfortable, especially for the Eva’s pilot Shinji Ikari, the show’s protagonist. Shinji realizes he isn’t simply controlling a machine but operating a living, feeling organism as if it were a war machine. The reveal is almost voyeuristic, short but sweet, a swiftly hammered response to the inquiry at the heart of Anno’s initial show: is a machine in part responsible for the violence it commits? In the case of the Eva, a creation that is both machine and living creature, the answer is unclear and unsettling.

In her 1985 essay “A Cyborg Manifesto,” science and technology scholar Donna Haraway writes:

“The cyborg is resolutely committed to partiality, irony, intimacy, and perversity. It is oppositional, utopian, and completely without innocence. No longer structured by the polarity of public and private, the cyborg defines a technological [polarity] based partly on a revolution of social relations…”

The cyborg nature of Evangelion’s mecha is, like Haraway says, “without innocence” and without the polar opposites of “good” or “bad” actions. This might seem at odds with Anno’s philosophy that beautiful machines shouldn’t kill people. But Evangelion’s cyborg unit feels a combination of first and second-degree pain — rather than feel the puncture of a stab or bullet directly, both mecha and pilot undergo the same experience of trauma. The pain is essentially shared rather than experienced at a single site. The polarity of public and private also doesn’t apply to the Eva. Evangelion’s mecha are alive, but still need a pilot to act in the same way as traditional war machines with “unadorned beauty” like the fighter jets Anno describes. Since it isn’t autonomous, it has no right to privacy. The Eva defies beauty and innocence while revolting against our accepted social norms of what is considered organic and what is mechanical.

When Shinji resists the Evangelion’s bloodthirsty impulses, like in the first episode of the series, it goes berserk. Shinji has no control — the Eva is acting autonomously. When the Eva is rampaging, it crawls into the space between creature and machine. It’s both a living individual with its own instincts and desires and a weapon someone can use to destroy giant monsters. With the Eva gone wild, Shinji remains in the cockpit watching in horror as his mecha writhes like a panicked animal.

Earlier 1970s and 1980s mecha anime series such as Mobile Suit Gundam and The Super Dimension Fortress Macross present this mecha/pilot relationship in a more straightforward manner. Pilot characters like Gundam’s Amuro Ray and Macross’ Hikaru Ichijyo simply see their machines as tools, extensions of themselves in so far as they have full control at all times. If their control is ever in question, it’s simply a mechanical error or the technology’s fault, never the direct action of the mech itself. This potential for the Eva unit to act autonomously is what differentiates it from classic mecha like Gundam’s RX-78-2 and Macross’ Valkyries; they’re in a class all their own, outside the machine/pilot binary.

Knowing what makes the Eva units unique compared to their predecessors allows us to understand the potential of the cyborg as a thematic device. For example, the realization that Shinji may not always be in control of his cyborg Eva unit is terrifying and traumatic. The violence committed by the machine, however, isn’t entirely the pilot’s fault either. The Eva is a cyborg, not a basic machine. This violence is neither perpetuated by a human hand nor a machine but something else that blurs the line between man and technology.Shinji must come to terms with  being responsible for something that acts violently on its own. Evangelion is aware of the contradictory nature of the mecha/pilot relationship. One can’t simply split the person inside the cockpit away from the machine without mental trauma.

In Beautiful Fighting Girl, a book about anime and manga that features Evangelion pilot Rei Ayanami on its cover, author Saito Tamaki comments:

“A generation traumatized by anime creates its own works that repeat the wound. That wound is taken over and repeated by the next generation.”

Anno’s generation surely had its fair share of exposure to violent media, so to claim their creations are “works that repeat the wound” of initial exposure is a plausible exaggeration. Compared to the relative friendliness of earlier sci-fi like Astro Boy or Gigantor, Evangelion is sometimes needlessly cruel to its characters. But powerful questions are raised in the violence committed by and against its beautiful machines, and in raising those questions it might be possible to break the cycle described by Tamaki and heal those wounds rather than reopen them. Shinji’s Eva unit is embedded with the spirit of his mother — a provocative narrative choice that lets the Eva itself serves some sort of nurturing purpose. It’s a vehicle for the mecha pilot protagonist to learn a hard lesson: you don’t have to be the gun when it comes to violence, but you can certainly be the trigger.

Evangelion’s depiction of the mecha/pilot binary represents a turning-point, a unique cultural moment where these “beautiful machines” are simultaneously capable of exacerbating trauma and resolving it. Frameworks such as Haraway’s definition of the cyborg allows us to see where the concept of the mecha and its pilot is intertwined with our understanding of pain, loss, and trauma. The Eva unit bleeds when injured, much like a person. It’s a cruel mother cradling the insecure insides of protagonists thrown into war. It’s not overly heady “deconstruction” but a reminder that violence and control are irreconcilable. To “repeat the wound” is to repeatedly jump inside the cockpit of a man-killing machine and to come to terms with the idea that violence is inevitable when people seek to detach themselves from the point of trauma. The man and machine are inseparable — we’re all attached at the spine to this fleshy, yet cyborg society.

Blake Planty
Blake P. is a fiction and freelance writer who loves haunting the web at the witching-hour. He loves coffee and his cat, Salem.