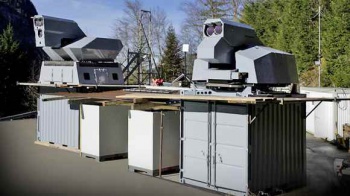 The 50kW laser is capable of performing even in adverse conditions like rain, ice, and snow.

German company Rheinmetall Defense has tested a 50kW military laser and proven that not only is it effective, but that lasers may be the future of Counter Rocket, Artillery, and Mortar (C-RAM) technology. Using two lasers superimposed over each other, one 20kW and the other 30kW, the machine is capable of producing a single 50kW beam that can cut through 15mm of steel a kilometer away. While that would be impressive in and of itself, the lasers are mounted on existing air defense turret technology, and can track moving targets using radar. To this end, the laser was used to shoot down several unmanned drones flying down at the surface at a speed of 50 meters a second – about 111 miles per hour. Finally, the weapon was used to track and destroy an 82mm – about three inch – steel ball as it hurtled towards the surface. The steel ball is about the size of a mortar round. The laser functions even in weather conditions that might be thought to interfere with lasers, such as ice, snow, rain, and bright sunlight, contrary to popular beliefs about laser weapons.

Rheinmetall Defense hopes to test a 100kW laser next year, saying in a press release that “nothing stands in the way of a future weapon system with a 100kW output.” The company wants to pair a 50kW laser with 35mm automatic cannon, to see how the pairing fares against simply laser based defense systems. Rheinmetall also intends to mount their laser systems on mobile platforms, and have already chosen the TM-170 as their initial candidate. Rheinmetall defense is based in Düsseldorf, Germany. The tests were undertaken at the Ochsenboden proving ground in Switzerland.