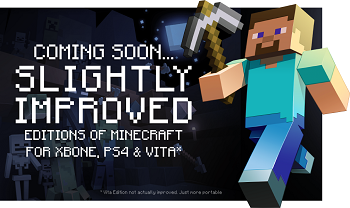 Players upgrading from the PS3 and Xbox 360 versions of Minecraft will receive a discount.

If there’s one thing the world isn’t lacking, it’s different versions of Minecraft. Whether you game on a PC, a console or even just your phone, it’s possible to find a competent version of the uber-popular game on all of them. That being the case, there are some corners of the gaming universe that it hasn’t reached yet, namely the next generation consoles. It’s an absence that the game’s makers at Mojang intend to correct this summer.

More specifically, the studio has revealed that the Xbox One, PS4 and Vita versions of the game will be launching this August. In addition to this new launch window, the company has also announced that it will be offering affordable upgrade options for players who have already purchased the game for Xbox 360 and PS3. The Vita version will also be cross buy compatible with the PS3 game. This, of course, means that if you already own the latter you’ll gain instant access to the former. Players buying any of the new versions for the first time meanwhile will need be charged $19.99.

While this is certainly good news there were also some negative confirmations. Namely, it would seem that cross-platform play will not be possible between the older iterations of the game and their PS4 and Xbox One counterparts. Likewise, while saves will be transferable from the older consoles to their newer counterparts, it won’t be possible to go in the other direction. Mojang has also said that licensing deals could make it hard to bring some of the existing DLC to the new versions of the game. Lastly, players who invested in a Blu-Ray copy of the PS3 game are currently not eligible for the same cross-buy deal as players who bought the digital edition. Recognizing that that kind of sucks, the company has affirmed that it looking “into ways to enable upgrade” using the Blu-Ray game.

Among the Sleep Wakes Up Next Week

Bundle of Holding Travels to the Distant Future with Numenera – Update