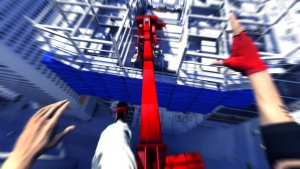 An EA event showcased EA Dice’s progress with the title, reflected in a new story trailer and screenshots. The game puts you in control of a young woman, Faith, who is fleeing an oppressive regime by leaping across rows of buildings that look like they could have been pulled from the Matrix films.

The game will have a 10 to 12 hour single-player story centering on Faith’s quest to free her sister, but no traditional multiplayer is included. The missions will not allow for free-roaming, but numerous paths will be available to complete objectives.

While Faith can wield weapons, she is faster without them and cannot perform close-quarters combat maneuvers while packing heat.

As seen in the trailers, the game has no HUD, but a small reticle will help with aiming and motion sickness.

Warning: Just looking at the screenshot makes me feel woozy and the gameplay video did worse.