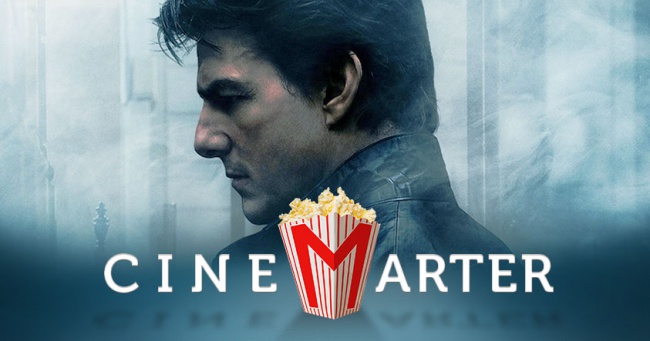 It’s tempting to just write “it’s like the last ones” and be done with my review of Mission: Impossible – Rogue Nation. If you’ve seen the other ones – particularly Ghost Protocol and perhaps with the exception of the second one – you know more or less what you’re going to be getting going in, and the film delivers on all of those expectations. Is it still a mid-level action series? Of course it is! But it’s a fun mid-level action series that has had a consistent level of quality during the almost two decades over which it’s been running.

Rogue Nation is once again led by Tom Cruise, reprising his role of Ethan Hunt. He begins the film going AWOL from the Impossible Mission Force (IMF), which has come under scrutiny from the CIA for its “questionable” tactics and results. Hunt is convinced that an anti-IMF called the Syndicate is out there – because the “anti-team” plot worked so well in Furious 6 – causing all sorts of terrorist mayhem, and he wants to stop them. He eventually convinces some of his IMF buddies – Benji (Simon Pegg), Brandt (Jeremy Renner), and Luther (Ving Rhames) – to help him, even though the CIA has forbidden it and helping Hunt is equivalent to treason. 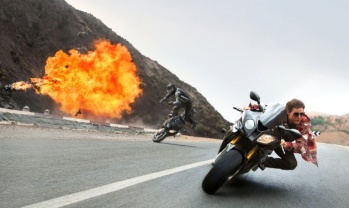 The villain is Solomon Lane (Sean Harris), who leads the Syndicate. His right hand woman is Ilsa (Rebecca Ferguson), who is either evil, a double agent, a triple agent, a quadruple agent, a quintuple agent, or … what’s six? Sextuple? Yes, sextuple agent. She changes her mind more often than an indecisive man attempting to buy a breakfast cereal. More often than not she seems to help Hunt and his crew in whatever side missions they have to do before taking down the Big Bad, but she almost as frequently betrays them right after. Trying to figure out which side she’s actually on is part of the fun of Rogue Nation. The is-she-isn’t-she aspect to the proceedings keeps you thinking throughout.

The side missions I mentioned earlier are where most of the film’s action scenes come into play. There are a couple of chases, one extraordinary heist, a shootout or two, at least one fist fight – there’s a lot of action, is what I’m getting at. One of the things that Rogue Nation has been bragging about in the marketing is that the majority of these have been accomplished without (much) CGI; the stunts are all real, and are frequently being performed by the actors, not stunt doubles. This does give the film a feeling of authenticity. Watching Tom Cruise hang off an airplane at several thousand feet or have to hold his breath for several minutes increases the tension the film wants to generate.

Watching Tom Cruise hang off an airplane at several thousand feet or have to hold his breath for several minutes increases the tension the film wants to generate.

That’s probably what I appreciated most about Rogue Nation, actually: it manages to sustain a constant sense of tension throughout its entirety. It does something that most horror movies struggle to achieve and does it while giving us humorous dialogue and sometimes quite frankly over-the-top action scenes. There’s always a chance of failure, or a sense that someone knows something that the heroes don’t that will lead to their downfall. It’s not always certain that they’ll succeed.

Then again, with the way the film – and the series, really – worships Ethan Hunt – and by extension, Tom Cruise – we honestly shouldn’t be surprised if or when it works out for the best. There’s a scene in Rogue Nation, for example, in which Alec Baldwin praises Hunt for what feels like an entire minute, going on and on about how awesome he is. One has to wonder if the series has become nothing more than a vanity project for Cruise – something he returns to when he feels like audiences aren’t giving him enough love lately.

To be fair to Cruise, he does put a lot of effort into the role, and even at the age of 53 still makes us believe that he can be a believable action hero. This is in large part because he does do many of his own stunts, meaning we don’t have to stretch our suspension of disbelief very far. He continues to be charismatic, too, which means that as long as you can put aside his personal life, his character is really easy to root for. None of the acting in Rogue Nation is bad, mind you, but it’s Cruise who’s the driving force and the one who shines the brightest – even if Rebecca Ferguson does make an impression of her own.

Mission: Impossible – Rogue Nation is another Mission: Impossible movie, by which I mean that you should know what to expect, and the film delivers the expectations that come with that classification. Good action, several thrilling sequences, a near-inconsequential plot that probably doesn’t hold up upon more than a cursory glance, and Tom Cruise single-handedly willing us to root for him and his team of heroes. It’s fun, okay? If you’ve seen the previous films, you know what you’re getting into. If you haven’t, why not? They’re all enjoyable, and the series has had a consistently good quality to it. This is another good one, and well worth checking out.

Bottom Line: Mission: Impossible – Rogue Nation is a tension-filled thrill ride, as long as you don’t try to pick apart its plot.

Recommendation: It’s another good Mission: Impossible movie, so that makes it worth checking out.