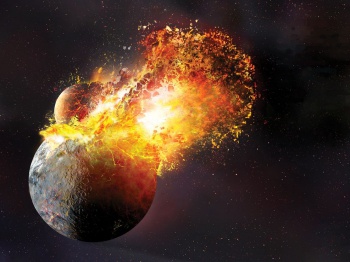 “It is not possible to give an exact date for the formation of the Earth,” says geochemist Guillaume Avice, who – along with Bernard Marty – has been closely examining the Theia impact remnants. “What this work does is to show that the Earth is older than we thought, by around 60 million years.”

He and Marty have been examining xenon left behind in Theia’s ‘time capsules’ – small pockets of gases trapped inside ancient quartz found in South Africa and Australia – comparing them to current isotopic ratios. The result is fascinating; while we don’t know precisely when the Earth formed, thanks to this new data it would seem it formed only 40 million years after the solar system itself, not 100 million as was previously thought.

“This might seem a small difference, but it is important,” says Marty. “These differences set time boundaries on how the planets evolved, especially through the major collisions in deep time which shaped the solar system.” The two geochemists presented their results at the Goldschmidt Geochemistry Conference earlier this week.

The xenon time capsules allowed the geochemists to calculate when the atmosphere was being formed, at which point it was hit by a planet-sized body; the Theia incident that we now know formed the moon. That impact would have completely destroyed whatever primordial atmosphere had been developing, forcing the process to begin anew.

There’s no such thing as ‘classical geography’ indicators as old as this – no rock layers, no pristine material – so these xenon time capsules found in billion-year-old quartz are all that’s left of what came before, at the moment Theia impacted.