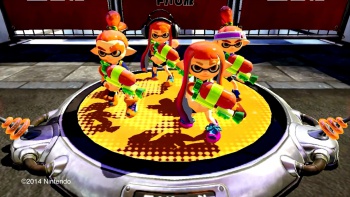 Splatoon, Nintendo’s ink shooter with cute squids, will launch in North America this May on Wii U, the company announced during today’s Nintendo Direct. The company’s third-person shooter was first revealed at E3 2014.

Today Nintendo showed off a central hub for Splatoon where players can interact with other players’ avatars and buy equipment. Players earn in-game currency from playing multiplayer matches, which are four-versus-four, where players can spray the ground with ink. Players can quickly swim through their own ink but will tread slowly through enemy ink. The team with the most of their color’s ink covering the map wins.

Players will have one main weapon, one sub weapon, and one special weapon. Using the in-game currency earned from multiplayer matches, players can buy a set of weapons, containing a main, sub, and special weapon. The main weapon will most likely see the most use over a match, while sub weapons are designed to set up obstacles and make it more challenging for enemies to navigate. Special weapons can only be used a certain number of times per match.

Also in the central hub are shops for clothing. This allows players not only to customize their inkling’s appearance, but it also applies stats to the character as each item will have its own set of buffs.

Splatoon has a four-on-four multiplayer mode and a single-player mode. The Wii U game launches in stores and on the eShop this May.