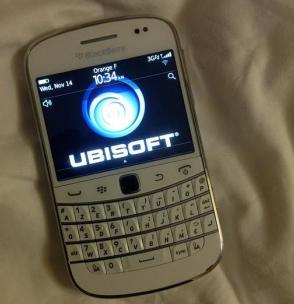 Early last month, Cliff Bleszinski left Epic Games to actually live life as a person who isn’t a game developer. As he said at the time, “I literally grew up in this business.” It doesn’t seem he’s ready to give up game design yet, as Bleszinski joked late last month that Capcom should call him, saying “We can fix Resident Evil together.” Capcom UK Joked back, saying “bring Pizza.” Today, however, another developer is apparently trying to get CliffyB on board – or at least invite him to lunch. Bleszinski tweeted early morning Paris time, where he is apparently vacationing, that he received a cell phone with an Ubisoft background and a single programmed number. When Twitter users asked if he was joking, he posted a photo of the phone.

There’s no knowing what conversation might have happened, or if Ubisoft will ask for CliffyB to join up, but we do know they’re going to dinner. For his part, Bleszinski said he was going to call them up and let them know:

I do have a very particular set of skills; skills I have acquired over a very long career. Skills that make me an asset for people like you.— Cliff Bleszinski (@therealcliffyb) November 14, 2012

That’s a fair thing for Bleszinski to say, because he has a proven ability to work with both existing intellectual properties, and perhaps more importantly, create successful ones from the ground up. For my part, I’m ready for Assassin’s Creed with chainsaws.