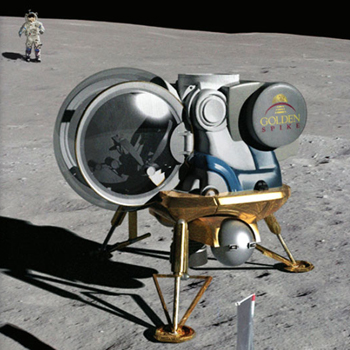 Golden Spike is planning to sell trips for two to the moon for the low, low cost of $1.5 billion.

Golden Spike, a private company founded by NASA veterans, has announced that it plans to launch a series of moon landings through the 2020s. Alan Stern, Golden Spike’s CEO and President, said that the company is “selling to nations, corporations, and individuals. Get in line – and I think it’s going to be a long one.” The company intends to use an existing launch vehicle, while it will commission specially designed lunar landers and spacesuits. Golden Spike intends to sell the missions to countries without their own space agencies, or that cannot otherwise afford to launch moon missions. That won’t be the exclusive audience, because the mission are available to anyone who can afford them – including companies and private individuals. “I don’t think anybody’s got us beat,” Stern said. “This is state-of-the-art cool.”

The current plan is that each Golden Spike lunar landing will involve four launches. The first two launches will put the lander into orbit, the second two will put the cargo and crew respectively into orbit. The company has a large support board of advisory scientists, including such famous voices as Homer Hickam – the subject of the movie October Sky. The company does not currently have a large number of wealthy investors, to which Stern responded “We don’t need it. We’re going to make our business run on sales.” Stern is also currently involved in a Google Lunar X Prize team called Moon Express, focused on planting a robot on the moon. Alan Stern is the former director of NASA’s Science Mission Directorate. Gerry Griffin, the company’s chairman, is a former Apollo flight director and NASA Johnson Space Center director.