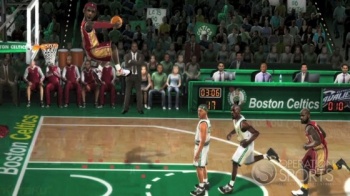 EA has announced that the PS3 and Xbox 360 versions of NBA Jam will be in stores on November 17th.

Boom shaka laka! The Wii version of the NBA Jam remake has been out for a while and has garnered generally positive reception, but so far Xbox 360 and PS3 owners couldn’t get their hands on the cartoony basketball goodness. Jam was originally supposed to available for download if you bought EA’s NBA Elite but when that game was delayed, EA announced a standalone SKU for Jam. Now EA has dated the release of NBA Jam: it will be in stores on November 17th for $49.99.

The PS3 and 360 version will be in full HD and offer multiplayer support over PSN and Xbox Live. At first, you can play in 2-on-2 matches but EA promises to add more multiplayer modes in the coming months including streetball favorites like Backboard Smash, Domination Free-for-All, Elimination, and 21.

And if that’s not enough to get you pumped, NBA Jam features all kinds of unlockable characters like Bill Clinton and Barack Obama. Personally, I hope that George Clinton will be a playable character. His multi-color dreads would frighten and confuse any opponent!