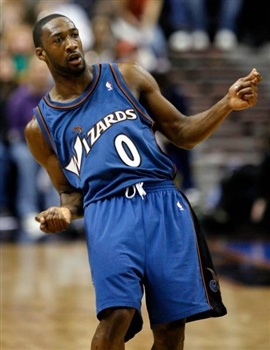 A reader email to Washington Post sports writer Dan Steinberg led the reporter to the Bungie.net forums where he discovered that Washington Wizards basketball player Gilbert Arenas was caught cheating at Social Double Teams online in Halo 3. Steinberg called Arenas and questioned him on his gaming habits.

Gilbert Arenas: I’m cheating? How am I cheating?

DS: Gilbert, are you creating dummy games with two fake friends and using the wins to rack up experience points?

When asked about his views on cheating and its effect on the game, Arenas discussed the problems with Halo 3‘s ranking system.

It’s a glitch. It’s a glitch in the game. I seen some kids that were like 600s, they won 600 Halo games and we only had that game for two weeks. And all the kids go to school. So I’m like, “What the hell you all doing?” And they said that’s what they doing, two-on-two.

That has nothing to do with me playing against other people, because when I play against other people I’m a 47 out of 50. It has nothing to do with your [skill]. That’s just like me playing basketball and I say, “The first one to 100,000 shots…’ and I go in there and say “Yeah, I made 100,000, I won.” But when you go out there you can’t shoot the ball.

Why not? I mean, who is it hurting? It’s two dummy players playing against each other. It’s not messing with anybody. I have my friend, it’ll be him and his fake friend, me and my fake friend, we’ll take turns losing back and forth. There’s nobody involved. I can see if we were playing against other people, [but] it’s not ranked games, it’s social games. So that’s the messed-up part. You can win things off of social, when you shouldn’t [be allowed] to. All you have to do is do what we’re doing. I guarantee everybody’s doing it. I mean, how would they know anyway?