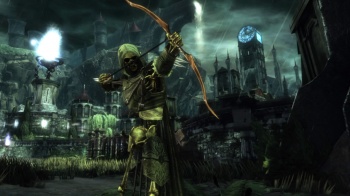 The Xbox One’s library will get a bit more diverse next year, as Perfect World Entertainment announced that it’s bringing its F2P Dungeons & Dragons MMO Neverwinter to the platform in the first half of 2015

Unlike most MMOs, Neverwinter‘s fast-paced action would fit well on a controller. Aside from the entirely forgettable Daggerdale, it’s the only other video game to use the 4th edition D&D rules (however loosely).

While the game is about to reach its fourth expansion module in a few weeks, the best part remains its player-made content. Using the Foundry, anyone can make their own missions and put them up for the world to play. They run the gamut from simple dungeon crawls to sprawling multi-part epics. Even better, popular map creators can earn a good bit of in-game cash for their creations in the form of tips.

As you might pick up from the name, Neverwinter takes place in the Forgotten Realms campaign setting. The world’s changed quite a bit if you’ve only played Bioware’s Neverwinter Nights, as the Spellplague has altered life irrevocably.

While there’s been no word about cross-platform play with the current PC version, we do know that it will (like most online games) require an Xbox Live Gold membership.

It seems that a lot of MMOs say that they’ll do console releases, but few ever actually pull it off. We’re still waiting on The Elder Scrolls Online, for example. Here’s hoping that the current batch of consoles will prove more MMO-friendly than the last ones.