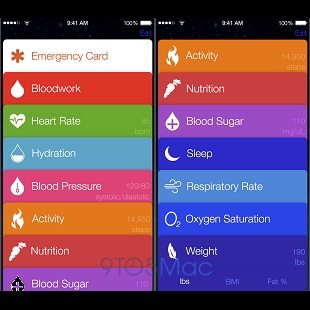 The new Healthbook app shipping with iOS 8 will shake up the health-tracking and fitness app business.

9to5mac has the scoop on one of Apple’s next big iOS apps: Healthbook. And they have plenty of art, details, and screenshots to share.

Healthbook, which seems to be inspired by Apple’s Passbook app, will be able to track your weight, Body Mass Index (BMI), nutrition, activity, and even hydration levels. It’s all organized by color tabs, which can be sorted by the user. There’s also an Emergency Card tab, where contact, and medication information can be saved.

While some of the information used by Healthbook will be input by the user, much of it will be gleaned from third-party apps, hardware within your iPhone (like the M7 chip in the iPhone 5S), and possibly external devices (Nike FuelBand, and the iWatch if it’s ever released).

There’s no official release date for the iPhone 6 and iOS 8, but both are expected later this year, probably in the Fall.