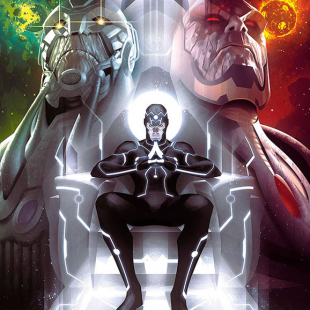 DC will be ending several of its less successful comics starting in June and will replace them with 24 new titles aimed at diversifying its catalog.

Last year, DC announced plans for a new event called Convergence. Aimed at combining multiple books pulled from different eras and universes of DC's long publishing history, Convergence promised to let readers revisit some of their favorite periods of comics past while also pushing the DC Universe forward in that special way only a big event can. Today, DC+ revealed exactly what the aftermath of Convergence will be. After the event wraps up, new series will be launched, some existing ones will die and the New 52 imprint will, officially, be no more.

The publisher announced the big change earlier today on its official website. According to the post, while the existing continuity will continue, the publisher will launch 24 new books beginning on June 3rd while also cancelling a score of its under-performing comics. Alongside these new comics, DC will continue publishing 25 of its existing series, all of which will maintain their current numbering and storylines. It's the company's hope that these new comics will help expand the diversity of its lineup to help attract new readers interested in something outside of its current catalog. "This heralds in a new era for the DC Universe which will allow us to publish something for everyone, be more expansive and modern in our approach and tell stories that better reflect the society around us," said Dan Didio, co-publisher for DC Entertainment. "Whether you've been a DC fan your whole life, or whether you are new to comics - there will be a book for you beginning in June."

The company would go on to indicate that it intends to go "back-to-basics" with popular characters such as Batman, Superman and Wonder Woman. Its new books, in turn, will be geared toward "reinventing key characters" such as Bizarro, Black Canary, Starfire, Cyborg and more. The full list of new comics will include the following:

The returning comics, meanwhile, will be:

All in all, I personally think this could be a good move for DC. While I have none of the animosity that some do toward the New 52, I'd also say that DC hasn't done the best job of providing me with compelling reasons to care about many of its books. With the exception of core titles like Superman, Batman and Wonder Woman, there's little that interests me. Maybe a new crop of comics will be the right ticket to pull readers like myself deeper into the depths of DC. What do you think? Does the list of new books contain anything that catches your eye?