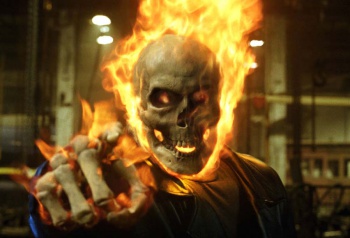 If we were to describe the film career of Nicolas Cage in a single word, it would have to “schizophrenic.” On the one hand, Cage won a Best Actor Oscar in 1996 for Leaving Las Vegas. On the other, he’s more recently been seen in movies like Stolen, which was nearly a direct-to-video release that is best described as a blatant rip-off of the Liam Neeson thriller Taken. Then, on an inexplicable third hand, you have movies like Drive Angry, which certainly wasn’t high cinema but was undeniably fun and allowed Cage to do what he does best: Chew scenery like a starving man at an all-bacon buffet.

As a result of this sporadically impressive filmography, we aren’t exactly sure how to feel about the news that Cage has no intention to return to the role of Johnny Blaze in future films based on Marvel Comics’ Ghost Rider character. Speaking to MTV, Cage laid it all out in pretty simple terms: “I think the ship has sailed on [Ghost Rider]. At least with me involved. Personally, I’m done. I’ve done what I had to do with that part. You never say never, but right now, today, I would say that I’m done.”

Cage had previously portrayed the hellbound biker in 2007’s Ghost Rider and 2011’s Ghost Rider: Spirit of Vengeance. Neither of these films were what one could consider objectively good, but they did have a few fun moments and both films managed to turn a profit. Granted, the revenue generated by these movies pales in comparison to other Marvel films (The Avengers, for instance), but they certainly pulled down enough money to ensure that at some point in the future there will be another Ghost Rider movie.

So, do we start speculating on potential replacements for Cage? Sure, go nuts. The comments section is below. That said, we’re not entirely sure that Cage is actually finished with the character. Yes, we heard what he said, but it’s also important to remember that Nicolas Cage is quite possibly the biggest comic book geek in Hollywood. His desire to play a Marvel Comics superhero was a huge part of why the original Ghost Rider movie was made in the first place, and while the man’s acting talents may appear mercurial his passions certainly aren’t. It’s not that we’re doubting his claims that he’s done with Ghost Rider, it’s just that we wouldn’t be entirely stunned to find out that he’s changed his mind a year or two from now.