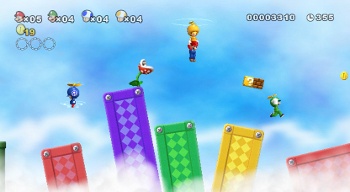 Despite roaring to early unquestioned dominance in this round of the console wars, Nintendo’s Wii seemed to slow in early 2009, with third-party exclusives like MadWorld and The Conduit underperforming. Sales for the system itself dropped dramatically, though not enough to let the other two consoles overtake it. Despite a price cut in September that poised Nintendo’s console to once again stampede to dominance (or so predicted analysts), reports that Nintendo had reduced the production of the Wii told a different story.

Or maybe not: Internal Nintendo estimates – in advance of the NPD sales data – suggest that the company sold 3 million Wii units during the month of December. This would be a swift turnaround from the rest of 2009, which saw month-on-month declines – and also a massive leap from December ’08, which saw a mere 2.15 million units sold thanks to hardware shortages (and that pesky recession thing).

In fact, it’s a current one-month console sales record and not by a small margin, either. The Wii strips the title from the previous record holder, the PlayStation 2, which earned it in 2002 with an impressive 2.7 million units sold. It remains to be seen if the Wii’s 3 million is more or less than the 3.04 million DSes Nintendo sold worldwide last December.

Sales were heavily buoyed by the release of New Super Mario Bros. Wii, as the multiplayer platformer approaches 4 million units sold – but is unlikely to achieve Reggie Fils-Aime’s prediction that it would match Activision’s juggernaut Modern Warfare 2 in sales.