This examination of James Bond includes full spoilers for No Time to Die. If you are going to watch it, we recommend that you do so before reading on. Bookmark this page if necessary!

Asked to distill his epic comic book series The Sandman to 25 words or fewer, author Neil Gaiman asserted that the series was about how the title character “learns that one must change or die, and makes his decision.” In some ways, that summary applies just as readily to No Time to Die.

No Time to Die ends with the death of James Bond (Daniel Craig). In some ways, this feels like a natural conclusion to the character arc that began in Casino Royale. Daniel Craig’s first movie in the role provided James Bond with an origin, so it makes sense that his final appearance should provide the character with definitive closure. So much of the Daniel Craig era hinges — for better and for worse — on the idea of continuity between the films, and this is the logical extension of that.

However, the death of Bond feels like the culmination of a tension that has been simmering through the five films from Casino Royale through to No Time to Die. More than any earlier entries in the franchise — with the possible exception of GoldenEye — these have been movies about exploring what it means for James Bond to exist in a radically changing world. While the films have made awkward references to the enduring relevance of the character as a spy, that’s not quite it.

James Bond first appeared in the novel Casino Royale, written by Ian Fleming and published in 1953. The current cinematic franchise launched less than a decade later with Dr. No. The character was hardly cutting-edge, even in his earliest appearances. In Goldfinger, at the height of Beatlemania, Sean Connery’s iteration of the character would compare drinking room-temperature champagne to “listening to the Beatles without earmuffs.”

Bond always represented a very traditional set of values. He was an artifact of the British Empire — a political entity that was already well in decline by the time that he first appeared. In GoldenEye, M (Judi Dench) accurately labels Pierce Brosnan’s version of the character as “a sexist, misogynist dinosaur.” Brosnan’s time in the role was built around the tension between the work that Bond does and the kind of man who would enjoy it.

Aside from the eponymous character, the Bond franchise itself was never particularly frozen in time. The production team was always anxious about current trends and shifting values. Live and Let Die tried to capitalize on the blaxploitation trend. Moonraker was rushed into production to compete with Star Wars. During the AIDS crisis, The Living Daylights downplayed the character’s sexual appetites to reflect the reality of the moment. Even License to Kill channeled Miami Vice.

During Daniel Craig’s tenure, the production team have found themselves addressing serious questions about the future of the character and the franchise. There has been considerable debate about whether the character could be race- or gender-swapped. (The latest answer seems to be that Bond can be a man “of any color.”) It seems fitting that at least some of these anxieties have bubbled down into the films themselves.

At times, Craig’s movies are introspective about the franchise’s familiar tropes. In Quantum of Solace, Bond does not sleep with the female lead, Camille Montes (Olga Kurylenko), perhaps because the film understands how creepy it would be for Bond to sleep with a woman who is working through explicitly sexual trauma. However, this isn’t always the case. The most controversial scene in Skyfall finds Bond sleeping with sex abuse survivor Sévérine (Bérénice Marlohe). 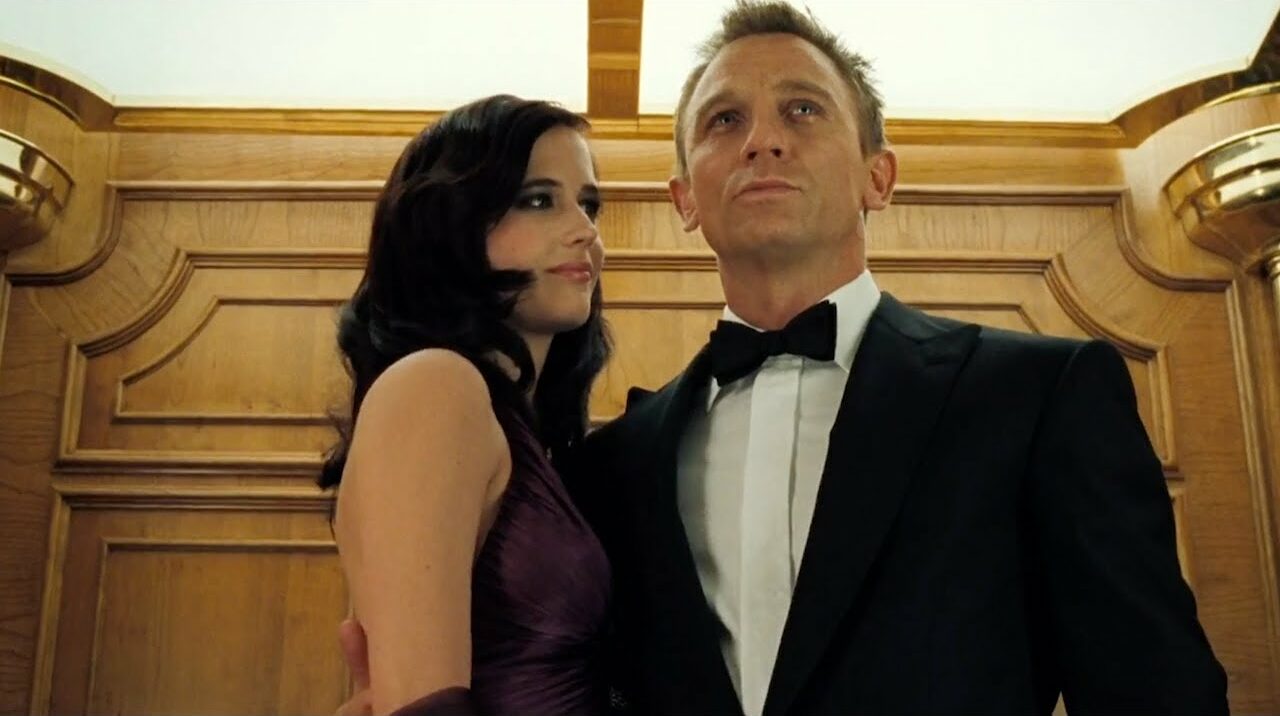 The most compelling tension across these films comes from the understanding that the world has changed and the question of whether Bond can change. In an interview with GQ, Craig was asked how Bond had “evolved” during his time in the role. “I hope [Bond’s] changed a lot while I’ve been part of him,” Craig answered. “What I’ve always tried to do is never judge him. He’s flawed, and his attitude towards the world and towards women is questionable, and I think that’s interesting.”

More than any prior iteration of the character, these five films have understood that the character of James Bond is a public performance. That performance is constantly tied to ideas of masculinity. In Casino Royale, Le Chiffre (Mads Mikkelsen) tortures Bond by strapping him to a chair and whipping his testicles with a rope, warning Bond that “if [he does] not yield soon enough, there will be little left to identify [him] as a man.”

Craig’s Bond struggles with that performance of masculinity. Casino Royale opens with a teaser sequence explaining how Bond earned his credentials. Double-0 status is dependent on two kills. This should be easy for the suave super spy. However, Casino Royale wallows in the brutality of Bond’s first kill in a dingy bathroom. “Made you feel it, did he?” Dryden (Malcolm Sinclair) taunts. Rather than acknowledge it, Bond executes Dryden mid-sentence. He buries his emotions.

Developed from that, much of his subsequent character arc is built around his difficulty expressing emotional vulnerability. In Quantum of Solace, he has to deal with his betrayal by Vesper Lynd (Eva Green). At the end of Casino Royale, he coldly boasts that “the bitch is dead.” Quantum of Solace is about Bond accepting the truth of what both M (Judi Dench) and Mathis (Giancarlo Giannini) have been telling him: that Vesper did love him, despite her betrayal.

When Bond connects with Madeleine Swann (Léa Seydoux) in Spectre, he is afforded an opportunity for happiness outside of the conventional trappings of a James Bond story. Swann asks whether Bond is happy with the life he has. “Why, given every other possible option, does a man choose the life of a paid assassin?” she asks. “Is this really what you want?” When pressed, Bond replies, “I’m not sure I ever had a choice. Anyway, I don’t stop to think about it.”

Then Swann asks the question that hangs over No Time to Die: “What would happen if you did (stop)?” Bond responds, “I don’t know.” This is the challenge that Swann presents to Bond. At the climax of Spectre, she effectively opts to walk out of the genre confines of a Bond movie, abandoning Bond as he sets out to confront Blofeld (Christoph Waltz). “I can’t go back to this life,” she tells Bond as she walks away into the London night. “And I’m not going to ask you to change.”

Spectre ends somewhat unconventionally for a Bond movie, with the secret agent retiring and driving off into the sunset to start a new life with Swann. This is the sort of ending that Bond never gets to enjoy. Most of his love interests disappear in the space between movies. The few women that he truly loves, like Tracy Bond (Diana Rigg) in On Her Majesty’s Secret Service or Vesper Lynd in Casino Royale, tend to be killed off before the closing credits so the status quo can be restored.

The opening sequence of No Time to Die teases something similar. While enjoying a relaxing holiday with Swann, Bond is attacked by Blofeld. Blofeld seeds doubts in Bond’s mind, convincing him that Swann betrayed him, just like Vesper. Bond pushes Swann onto a train, telling her that she will never see him again. Blofeld later summarizes, “Then you left her, for me.” Inevitably, Bond is drawn back into the world of spycraft by old friends Felix Leiter (Jeffrey Wright) and Mallory (Ralph Fiennes).

Can Bond change, or must he always revert back to the familiar archetype? Daniel Craig’s tenure in the lead role overlapped with a public debate about notions of contemporary masculinity — an idea that Bond had always embodied. Is it healthy for men to bury their feelings, like Bond does? Is it reasonable to equate masculinity with the capacity for violence, like Bond does? Is it helpful to reduce interpersonal relationships to baggage to be easily discarded, like Bond does?

As the title of the film implies, time is a recurring preoccupation for No Time to Die. The opening credits imagine the statue of Britannia succumbing to time; the sands of an hourglass swallow everything, a pendulum swings like a weapon, the clockwork gears circling around the silhouette of our hero. Bond repeatedly quotes from On Her Majesty’s Secret Service, bookending the film by assuring Swann that she has “all the time in the world.” The implication is that he does not.

No Time to Die asks whether Bond can change. It teases the possibility of a different and better life. At one point, he abandons the investigation into Logan Ash (Billy Magnussen) to follow Swann “home.” He discovers Swann’s daughter, Mathilde (Lisa-Dorah Sonnet). She is the “perfect” thing that they made together. Bond briefly enjoys domestic bliss, even waking up to make his daughter breakfast. It’s a tranquil and idyllic existence, one no earlier Bond film dared imagine for the hero.

That existence cannot last. The standard tropes of a Bond movie intrude. Lyutsifer Safin (Rami Malek) abducts Swann and Mathilde. Bond is forced to embark on a dangerous rescue mission, which also inevitably involves saving the world. Bond embraces what he has always been. “Quite the mess you’ve made,” Safin chides. “Like an animal.” In a moment of vulnerability, Bond confesses to Safin, “It would have been nice… to have a chance.” Bond cannot be anything but what he is.

At the climax, Safin infects Bonds with nanobots that would make him literally toxic to Swann and Mathilde. If Bond ever touches either, they will die. The nanobots cannot be removed or destroyed. They are rendered part of Bond’s DNA, a visual that is also incorporated into the opening credits. Bond is destined to be the character he always was. He is a weapon, and anything he loves will die because he cannot change — even in this final film starring Daniel Craig. So, James Bond chooses to die.

There is an ambivalence to this resolution. Bond’s inability to change is an easy answer to a complicated question, avoiding modernizing the character in favor of adhering to a traditionalist interpretation. Safin is presented as a villain in part because he believes things can and should “evolve,” making Bond the defender of the status quo. For all the controversy around casting a black woman as 007, it is Nomi (Lashana Lynch) herself who insists Bond be “redesignated” 007.

No Time to Die presents the inevitability of Bond’s inability to move with the times as both triumph and tragedy. At Bond’s wake, Mallory quotes from Jack London, “I shall not waste my days in trying to prolong them. I shall use my time.” Everything has its time and its place. Like James T. Kirk (William Shatner) in Star Trek VI: The Undiscovered Country, Bond’s most dignified decision is to both be true to himself and to let “history get past people like [him].” Maybe that’s a kind of heroism.