Developed by Roll7; Published by Devolver Digital; Released on May 14, 2015; Available on PC (reviewed), PlayStation 4 and PS Vita; A digital copy of the game was provided by the publisher. 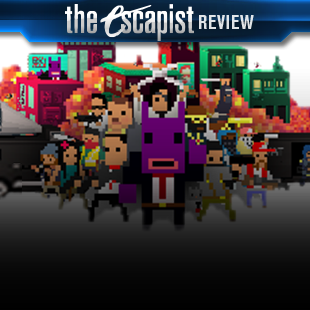 Not A Hero is a bit like a Rube Goldberg machine.

When it works, it’s a spectacular piece of performance art that looks amazing for onlookers, and feels amazing for the person who put it all together. When it doesn’t, its failures are as frustrating as they are arbitrary.

Not A Hero is about the mayoral campaign of Bunnylord, a big purple bunny-esque creature in a nice suit who promises to avert an unknown but upcoming apocalypse if he is elected mayor. His central campaign focus is stomping out crime, and his method for doing so is to fill his campaign staff unstable people who like guns. Then unleash them outside of numerous high-rises with carte blanche for violence.

For the month leading up to election day, players are tasked with various daily missions for BunnyLord’s campaign. Primarily, the player will be wandering through various building cut-outs, alternating between taking cover and firing bullet after bullet into stereotypical Russian gangsters, black street gangers, and Asian triads. Players also have additional missions, which includes completing a number of executions, avoiding being punched by enemies, or firing a limited number of shots over the course of the mission. These goals impact the percentage of votes BunnyLord has by the end of the mission, which also determines which characters are unlocked over the course of the campaign.

In theory, these missions work well. Being a 2D action game, everything is punchy and fast. Any given room full of enemies is an opportunity to apply each character’s strengths and weaknesses, there are multiple ways to challenge opponents, and several upgrades and secondary weapons to find and use. Every enemy action and player opportunity moves nearly as quickly as thought, and every successful room creates a flowing sense of action punctuated by the splatter of blood and the littering of corridors with bodies and bullet casings.

In practice, the whole assembly rarely comes together so perfectly. The timing of enemy patrols, the instant ability for players and enemies to find cover, and the vague uncertainties in where the game will elect to make the player take cover (or when an enemy can be successfully tackled versus when they will punch players), plus the inaccuracies baked into the gunfire, mean that the exact same strategy can be effective one run, and fail catastrophically the next. Working hand-in-hand with that is the exacting need for near-perfect input. Anything that interrupts even a second’s gameplay, be it the Steam overlay or an ill-timed pop-up from Windows, causes inputs to drop and player actions ignored, and near universally leads to player death. 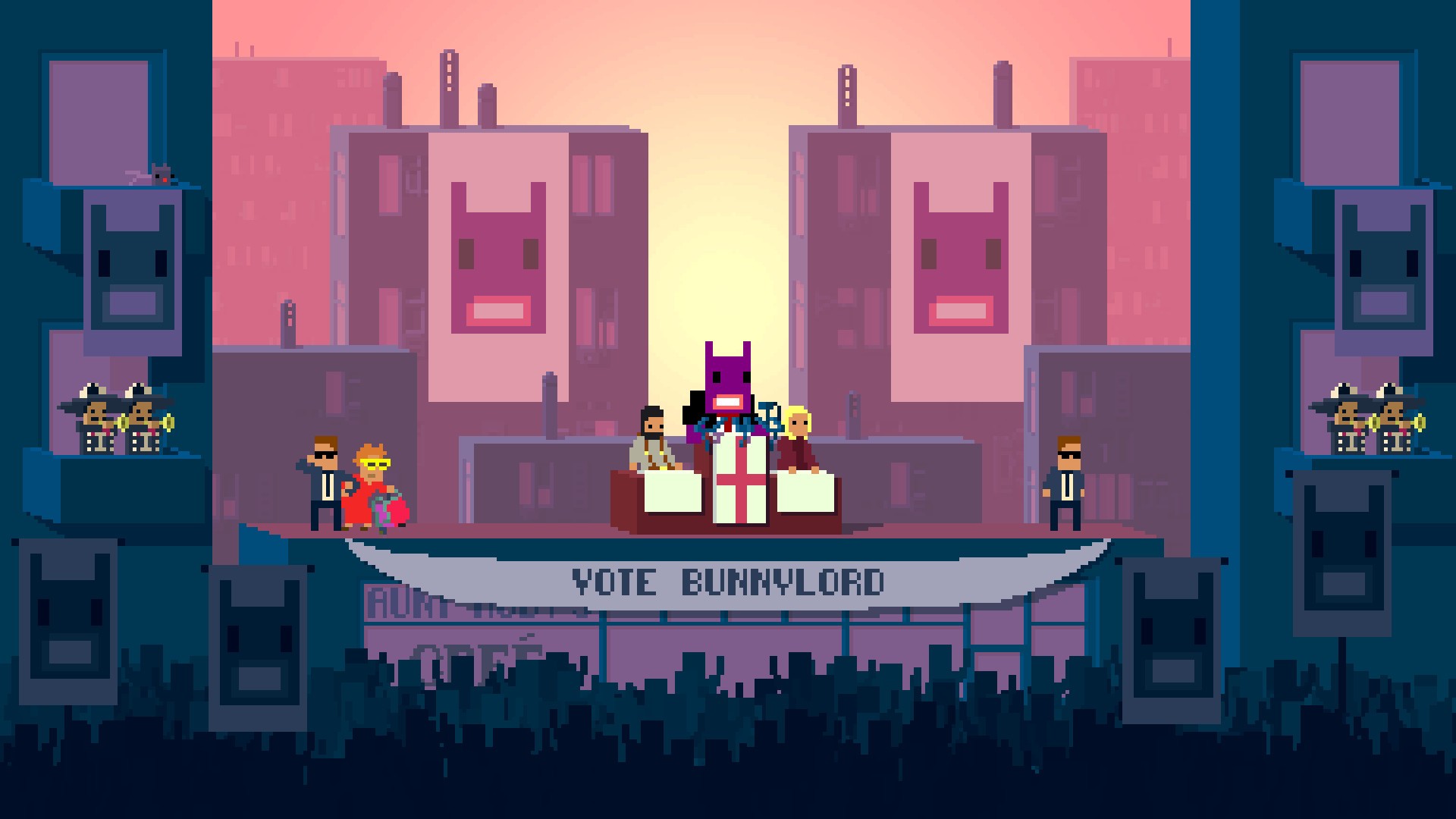 Because of that, the game feels a little too fast. Too little margin for error to make each run really reliable. Sometimes the player will take the closest cover, others they’ll slide to the next, almost without warning or reason. Sometimes that means finding cover, sometimes it means tripping an enemy and getting drenched in enemy fire. Any second’s mistake will lead to repeating the level. For shorter levels, it isn’t a big deal. For longer levels, it could mean repeating a minute’s worth of familiar gameplay just to challenge the last five seconds over, and over, and over, and over, and over again. For players that don’t mind the repetition, Not A Hero will work a lot better. For those that don’t, it can become more of a grind than a joy.

The story beats work similarly. Each mission is prefaced and post-ended by a brief monologue from Bunnylord, which covers his campaign goals for the day. His speech also has a madlibs quality to it, with a random spattering of adjectives and adverbs that change every time the game is closed and reopened, and it gives his speech a very formulaic feeling. When attached to the strange, balloon-animal squeaking noise of his speech and the slow moving text, the speeches that are meant to feel irreverent and humorous end up dragging.

The dialog and sense of humor is consistently delivered, but not always consistently funny. It’s all a little childish, with the over-the-top violence, the silly death animations, and the word-jumbled speeches feel like a strange mixture of childlike impishness and political double-speak. Every speech is accompanied by an “Enter to Skip” prompt below, and every joke that falls flat ends up making it look like tantalizing option. However, skipping even a bland joke means skipping the entire story for that mission, and simply having a key to accelerate the speech would have improved the before and after speeches a great deal. Instead, players’ options are to weather through the jokes that flop, or skip straight to the grind.

Not A Hero feels like it should work better. The cover system is clever when it works. The combat is fast enough to always feel satisfying and urgent, but often too fast for how imprecise the player control over cover can be, especially when cover doesn’t work. The multiple potential outcomes for each button-press make dicey scenarios become losing scenarios. The humor is slowly delivered, and imprecisely applied. When the the game lands, it lands with the right kind of bombastic splash of energy and visual flash to make the whole thing worthwhile. When it fumbles, and it will fumble a lot, it ends up feeling like it may not have been worth the effort.

For players who found joy out of the visceral haste and repetition in Hotline Miami will find Not A Hero the right kind of familiar, and those who didn’t will probably find it the same way. Not A Hero isn’t heroic or spectacular, grandiose or meaningful, or even all that endearing. Like its protagonists, the game is kind of messy, a little off-center, and has pretty good ideas buried under the outer shell.

Bottom Line: Not A Hero isn’t a game for everyone. It’s flawed, repetitive, but works so well when it works.

Recommendation: Pick it up if repetition, gunplay, and blood are your kind of thing. If that doesn’t sound appealing, then you should probably give it a pass.

Taylor Hidalgo is a writer who flees more from deadlines than bad guys. You can find his work on his website, his ramblings on Twitter (@nukelassic), and his editor waiting impatiently nearby.