Oliver’s love life has always been messy, but things get much worse when Cupid sets her eyes on The Arrow.

“Draw Back Your Bow” is another villain-of-the-week for Arrow, with the continuing investigation into Sara’s death gone cold and the threat of Ra’s al Ghul not yet revealed. A copycat archer calling herself Cupid has murdered Ted Grant’s former partner, Isaac Stanzler and Oliver must track her down before her body count rises. At the same time, Oliver struggles with the feelings he still has for Felicity, hurt and jealous over the realization that she is working closely with Ray Palmer.

With Felicity’s help, Oliver identifies Cupid as Carrie Cutter, a former Starling City Police Department S.W.A.T. team member. Mental illness caused Carrie to leave the police force, and now she’s become dangerously obsessed with the vigilante. For a bit of a tired trope (fan becomes fanatic becomes dangerous threat to themselves and those around them), Arrow manages to pull off this story without feeling too gimmicky. Cupid’s creepy love nest, the slow reveal of the extent of her obsession, and some creative fight scenes all make Cupid feel like a real threat to Team Arrow. Her stated motivations are scattered and inconsistent, reinforcing the fact that she’s suffering from a mental illness. Actor Amy Gumenick really nails the obsessive, delusional air of Carrie Cutter, though her dialogue doesn’t always hit the mark. Her lines sometimes move past unsettling into laughable, losing her threatening edge. 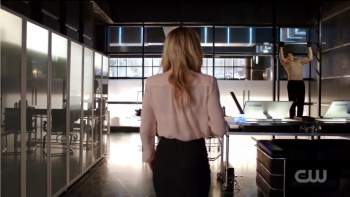 For those fans who were missing the gratuitous shots of Oliver working out shirtless, this episode serves up parallel shots of Ray Palmer. The love triangle between Felicity, Oliver, and Ray is picking up steam now, despite Ray’s advances still coming off as a little creepy. Oliver told Felicity he couldn’t be himself and The Arrow at the same time in “The Calm”, effectively ending their romantic relationship in order to remain a vigilante. In “Draw Back Your Bow” we see some of the emotional fallout from that decision. Diggle is back in the role of insightful, emotional communicator in this episode (after some character missteps last week), and his conversations with both Oliver and Felicity about their halted relationship are perfect little character studies.

“Draw Back Your Bow” is satisfying Arrow episode, giving fans equal parts comic book references, exciting action sequences, and character moments. This is the sort of early season episode I’ve come to expect from Arrow, and the slower pace suggests that Sara’s murder is not going to be a mystery that Team Arrow solves quickly, despite the frantic pace of the earlier episodes this season. There’s no new episode of Arrow next week. Instead, a two-part crossover episode between The Flash and Arrow will begin with “Flash vs Arrow” on Tuesday, December 2 and conclude with “The Brave and the Bold” on Wednesday, December 3. Both episodes will air at 8/7c on The CW.

Arrow airs Wednesday nights at 8/7c on The CW. You can also watch the latest episodes on The CW’s website and Hulu. Spoilers ahead as we discuss Felicity’s love life and Carrie’s mental illness.

The Oliver-Felicity-Ray love triangle gets a lot of fuel in “Draw Back Your Bow”. Now, I love a good love triangle, and I honestly do like the conflict that’s developing here. Oliver’s struggles between what he needs as a person and what he needs in order to be The Arrow have been the core motivation for the most satisfying character conflicts in this show. The trouble is that I just can’t shake the feeling that Ray Palmer continues to pursue Felicity’s affections in shady ways. Inviting her to dinner is one thing, but getting her a dress to wear (and then later a very expensive necklace) has a vibe of using gifts as manipulation, as a way to make Felicity feel like she owes Ray something in return. Instead of being flattering it comes off as underhanded, making the whole exchange feel carefully calculated to make sure Felicity comes to the dinner… Not to mention the power dynamic between the two of them.

The result of the dinner is a mining deal that appears to have something to do with producing the A.T.O.M. Exosuit. The Exosuit, Ray’s secret design that we glimpse towards the end of the episode, will allow him to become his comic book alter ego, The Atom. The mine will produce something called “dwarf star alloy”, presumably a metal needed to manufacture the Exosuit (but not a comic book reference). 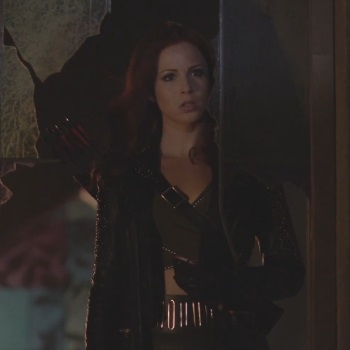 Arrow does a decent job of avoiding the pitfalls of writing a mentally ill character. “Draw Back Your Bow” avoids labeling Cupid as just a crazed fan and therefore an unsympathetic character. Instead, Oliver repeatedly says that she’s not well and needs help, and contacts her therapist in order to better understand her. That said, I was really disappointed with how they resolved Cupid’s story. According to her therapist, Carrie is suffering from severe attachment disorder. After the final big fight, instead of getting her real help, Team Arrow hands her off to Amanda “I Put Bombs in People’s Heads” Waller. Clearly, Carrie Cutter needs help to battle this mental illness that has severely interfered in her ability to have satisfying, normal relationships, to have fulfilling work, and to function well in everyday society. It’s disappointing when this episode started out so well by emphasizing that she needed help, and ends with her in the hands of A.R.G.U.S.’ Suicide Squad. Fictional descriptions of mental illness don’t have a great track record, and it’s disappointing that Arrow didn’t do something better with Carrie, especially considering generally good handling of addiction and alcoholism for Laurel Lance in season 2.

If nothing else, Cupid’s delivery to the Suicide Squad does give us a subtle reference to Harley Quinn. In the season 2 episode “Suicide Squad”, a female member of the squad calls out from her cell to Amanda Waller and Diggle, saying, “Do you cuties need some counseling? I’m a trained therapist!” When Diggle gives Oliver the news about Carrie, he says, “Lila says Cutter’s even nuttier than the last woman they had on the squad.”

At the end of this episode we are introduced to another villain of the week: Captain Boomerang. Like Cupid, Captain Boomerang is another established comic book villain, though he is best known as one of The Flash’s enemies. With the upcoming crossover episode, it looks like Captain Boomerang will get a chance to fight both Barry and Oliver.

Bottom Line: “Draw Back Your Bow” is another solid episode, with all the relationship drama and explosions I’ve come to expect from Arrow. The moment between Felicity and Diggle alone makes this episode worth watching.

Recommendation: A solid, good episode with all the components that make Arrow fun to watch.