This is the main event, folks. Last week, one of the world’s biggest publishers of electronic entertainment, Electronic Arts, released a game that it intends to go head-to-head with the crown jewel of its main rival, Activision-Blizzard. With Bad Company 2 released a mere four months after Modern Warfare 2, things are about to get interesting. There’s a lot at stake here – billions of dollars in revenue, the respect of the gaming public and the title of the World’s Greatest Online Multiplayer Shooter. It’s an epic showdown that neither company can afford to lose … which makes it all the more surprising to learn that Activision and EA aren’t even playing the same game.

It’s a ridiculous statement on the surface. Sort through all the press releases, the screenshots, the box art, etc., and you come away with the distinct impression that Bad Company 2 and Modern Warfare 2 aren’t just playing the same game – they are the same game. Both focus on acquiring, equipping and discharging an endless array of high-tech yet realistic firearms. Both surround you with a squad of surly yet loveable comrades whose purpose is to lighten the mood between gun battles as much as it is to lay down suppressive fire. Both haphazardly sketch out a story involving a heated conflict between Russia and the U.S. that includes, among other things, a trip to South America, an E.M.P. and a rogue Russian commander who wants nothing more than to see the U.S. in ruins (although he has both arms in Bad Company 2).

But while DICE and Infinity Ward’s approach to story and setting may be nigh identical, their attitude toward gameplay is vastly different. It’s immediately evident in the games’ single-player campaigns: While Modern Warfare 2 sets players on an uninterrupted (but conspicuously narrow) path through each level, peppered with dramatic moments and spectacular set-pieces, Bad Company 2‘s level design is simultaneously more open and fragmented. As a result, Infinity Ward’s game is paced perfectly to deliver a constant wave of tension and release according to the developers’ precise vision, but that comes at the expense of player agency – many felt that Modern Warfare 2‘s single-player campaign more closely resembled a rail shooter than an FPS. And while DICE’s level design allows you more flexibility in how you tackle each challenge, that approach sacrifices the highs and lows of the experience. If Modern Warfare 2 is the roller-coaster of first-person shooters, then Bad Company 2 is the bumper cars: You may never have the breath sucked right out of your chest, but damn if it doesn’t feel good to send somebody flying into the wall from a well-timed collision. 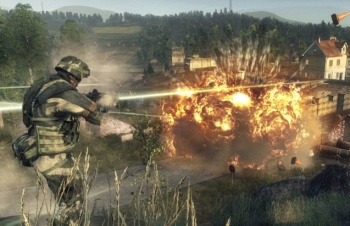 If the games’ single-player campaigns hint at the developers’ differing design philosophies, however, their online multiplayer modes put that division on full display. It may seem counterintuitive that an online multiplayer game can be a directed experience – this is a game mode that lives and dies based on player involvement, after all – but that’s exactly what Infinity Ward has done with Modern Warfare 2. Strip away the veneer of realism, and you realize the developers are controlling players’ experiences as tightly in the game’s multiplayer mode as they are in the game’s story mode. Maps are riddled with cover points that grant a perfect lane of fire in one direction while being vulnerable from another – the reason campers are so effective is they know how to get the maximum advantage from this in-built asymmetry. Like Modern Warfare 2‘s single-player campaign, battles are incredibly intense, yet they tend to play out pretty similarly each time.

That can’t be said of Bad Company 2. With its sprawling maps and destructible cover, DICE has forfeited the kind of granular control that Infinity Ward has over player behavior in favor of a more free-wheeling, chaotic atmosphere. The addition of vehicles ups the ante even further, allowing strategies that completely evade any type of developer direction. You rarely encounter situations where it feels like the game is dropping your opponents into your lap, as you often do after a particularly impressive killstreak in MW2. Instead, you have to make your own fun – you can hop on an ATV, zip past the front lines and flank the enemy, for example, or order a mortar strike on the crumbling building that the enemy team has holed up in, forcing them outside to get picked off by your teammates. You get the sense that there are hundreds of strategies the developers simply couldn’t account for, and it’s up to you to employ them (or counter them) effectively.

Emotional intensity versus spontaneity, developer intent versus player agency – there’s no winner in these “conflicts,” no matter what EA’s marketing department or Activision’s SEC filings tell you. In fact, they’re not battles at all, but rather questions. Should storytelling come at the expense of gameplay? Should players be allowed to make choices that go against the developers’ wishes? How much of the responsibility for “fun” lies in the hands of the developers, and how much at the feet of players?

The developers have answered. Now it’s time for players to offer their take.