All the negative commentary on the violence at E3 this year is consternating. Why this year, and not last year? I understand a renewed fervor against booth babes because they were out in much stronger force at E3 2012 than they were at E3 2011, but last year’s Expo was just as loaded with shooter games as this year’s was. I don’t remember E3 2010 being any less of a hothouse for shooter promotion, either, so the sudden bandwagon of anti-videogame violence rhetoric can’t be laid on how many shooters were at E3 in 2012.

It’s as though people from all different corners of games journalism and punditry have had a spontaneous, communal awakening to the issue of audiences cheering for violence in videogames. How many times in the last two weeks have we read an op-ed hung on the peg of the audience’s reaction to the last scene in the demo for The Last Of Us when the hero shotguns a human survivor in the face? Leigh Alexander wrote about this problem two years ago; this is also an old issue, not some new controversy that ought to be such an attractive, safe angle for everyone to jump on this year.

The anti-violence rhetoric might not actually be about protesting the violence. It’s possible that’s a surface concern underlying other, deeper issues. Most everyone who writes about videogames is hip-deep in virtual blood. So many of these rhetorical exercises begin with something along the lines of “I’m a first person shooter veteran, but …” or “I love violent games as much as the next person, but …” and then it feels like someone driving by in a gas-guzzling Humvee while screaming out the window about the damage everyone is doing to the environment with their cars. The subtext is guilt at realizing shared culpability.

There may be a dawning realization that one of the charges core gamers love to throw at the videogame media, that the media doesn’t represent their interests, may actually be true to a degree. The core gamers were the people cheering at the Sony press conference during that shotgun blast at the end of the trailer for The Last of Us. Anyone raising their voice in protest of that trailer and the violence it represents is making a statement that they’re growing past such violence faster than a large segment of the audience is. We can’t even cast the core audience in the mold of “18-to-35-year-old males” any longer, not with our current understanding of how diverse the videogame audience is, and not with as many women vocalizing their love of the shooter genre. 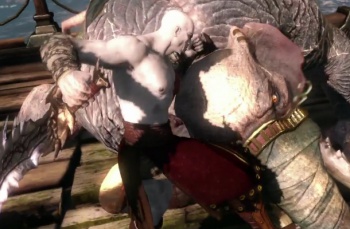 Perhaps there’s a lot of subconscious realization or personal admission that videogames writ large are never going to be any more mature than Hollywood action films, vacuous pop music, spandex-clad and platitude-spouting superhero comic books, or Stephanie Meyer novels. There’s always a current of thought running in critical circles about how videogames can be so much more than they are, and those conversations often carry a subtext that videogames should be more than they currently are because they’re intrinsically superior to other forms of media. E3 2012 looked those critics in the face and said, “Not really.” We’re never going to grow out of the shooty and moar splosions, we’re just going to add to the palate of experiences that videogames offer and live with coexistence versus wholesale replacement and evolution.

There’s a silver lining here that either no one’s picked up on yet: The fact that such a communal, negative reaction to the violence at E3 this year is even possible is a sign that videogames writ large have achieved the level of maturity those critical voices have been pining for. This is not to suggest the evolution of videogames is finished, nor to suggest that increasing the variety of experiences supported by the medium is no longer a concern to be monitored and discussed. But ever since I began writing about videogames two years ago, it’s been impossible not to see this hand-wringing thread of “When will videogames grow up?” discourse running through popular writing about videogames.

The communal reaction to E3 is a touchstone for “When videogames started to really grow up.” It would be impossible to recognize E3 for the anachronism it has become without also making the tacit statements that videogames writ large have moved on from the days of simple kinesthetics and graphics fetishism being enough to confer value about works in the form. This also is not a new realization, but it’s one thing for everyone to know something and another thing to have a proof right under our noses. The collective nose-turning at E3 by the critical community is that proof.

Videogames haven’t “grown up” but they have, finally, diversified. We may be at the point where, unless the outlet in question has a clear focus to its coverage for context, we can’t just use the word “gamers” anymore without a modifier to make the appellation specific. E3 doesn’t represent all of us anymore, either. We’re on the other side of videogame history, even if we’ve only taken a few baby steps.