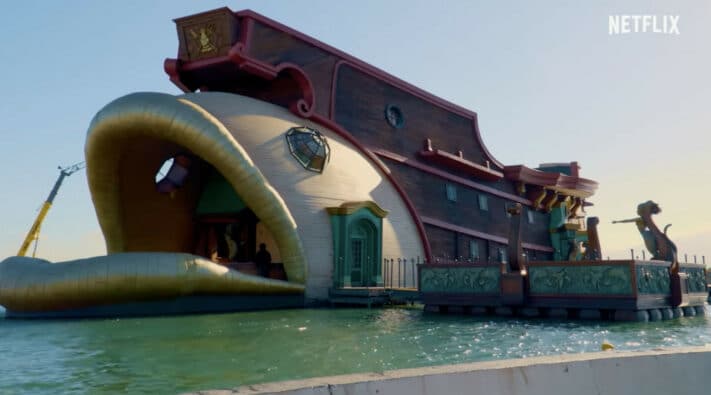 Netflix Geeked Week just gave us a good behind-the-scenes look at the sets we’ll see in its live-action One Piece series. This early glimpse at the adaptation arrives as a video that features appearances from showrunners Matt Owens and Steve Maeda, as well as the actor behind Monkey D. Luffy himself, Iñaki Godoy. The pirate world of One Piece is just as iconic as the cast of characters its story revolves around, and for the most part, it looks like Netflix is off to a good start.

The clip focuses on a real-life recreation of fan-favorite One Piece location Baratie. There are a few changes the fans will certainly notice, but the heart of the ship’s design is still there. And it even includes a bar just for Zoro. In addition to very pirate-y reimaginings, the behind-the-scenes first-look video includes a treasure trove of concept art that the Netflix team is using as a baseline for the One Piece sets.

Netflix’s involvement in a live-action One Piece show was announced in early 2020, revealing that original manga creator Eiichiro Oda is overseeing the series alongside Owens and Maeda. The pressure to deliver with One Piece is on, especially after Netflix’s Cowboy Bebop show failed to impress. So far, it looks like the streamer has its heart in the right place, but you can stay tuned for any updates.