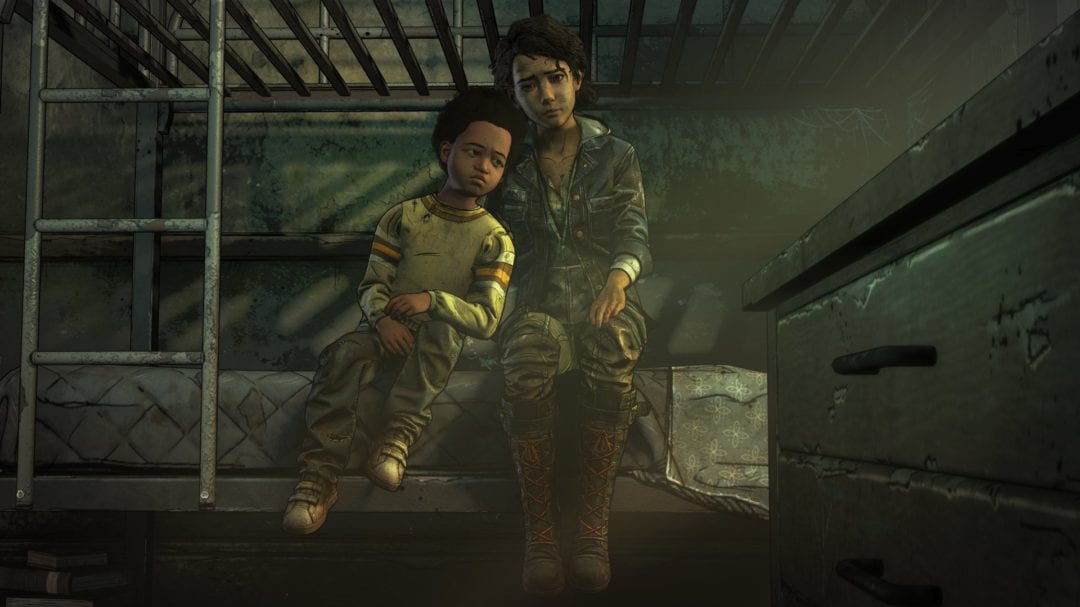 Mere days after they gave an interview with Variety about plans for the current “season” of its narrative adventure game The Walking Dead, Telltale’s creative director and one of the designers of The Walking Dead were laid off — along with approximately 250 of their coworkers. Following a mess of rumors from industry insiders and former employees, Telltale CEO Pete Hawley — sporting an avatar in the style of the cartoon series Family Guy — announced on Twitter that the company had begun “a majority studio closure.”

“It’s been an incredibly difficult year for Telltale as we worked to set the company on a new course. Unfortunately, we ran out of time trying to get there.”

Just like that, 90% of Telltale’s workforce was shown the door. No warning. No severance. Just another day in the video game industry. The only thing unusual about these layoffs is that most of the developers affected had yet to finish making their games.

According to data accumulated by the International Game Developer’s Association and Take This, approximately 39% of those 220,000 are asked to work unpaid overtime, or “crunch,” and approximately 50% of those who leave the industry do so because of burnout or low quality of life.

To boil that down: every year tens of thousands of game developers are worked so hard they quit.

It would be natural to assume the games Telltale produced were easy to make. They were not, after all, graphically complicated in the way many of us are used to thinking about such things. And yet, the relative outward technological simplicity of Telltale’s games belied a craftsmanship that was just as complex to manage, if not more so, than the development of a typical AAA shooter. Lavishly animated, multi-layered narrative adventures do not necessarily require years of physics engine development, but the writing and illustrating that does go into those games is often harder to scale, and difficult to outsource. Combined with full-scale voice production and direction, each Telltale game is roughly equivalent to an animated series. Arguably more than one, considering the opportunities for different outcomes depending on your choices. Imagine Family Guy, for example, but starting with Episode One, you could decide how one of its characters responds to situations that could eventually, lead him away from being a wisecracking smart-ass and into a career as CEO of a video game studio. (Pete Hawley will remember that.)

With a decade developing narrative takes on licensed properties such as The Walking Dead, Batman, Wallace & Grommit, Guardians of the Galaxy, Sam & Max, and Game of Thrones, Telltale was known for getting it right. With “it” being the hard-to-define X-factor that you might not be able to describe, but that you surely notice when it’s not there.

All of which makes Telltale’s fate harder to swallow. How does a little-known studio in San Rafael, CA, best known for Texas Hold’em and Bone: Out from Boneville become the keeper of the interactive narrative flame responsible for broadening the universes of over a dozen different film, TV, comic book, and even video game franchises? And within just over a dozen years, how did it make enough bad choices to reach its own worst ending: all but closing and abandoning multiple games-in-progress?

The answer, in true interactive narrative style, is both simple and not.

The video game industry has been compared to Hollywood so often, I get tired of making the analogy. But there’s an old saying in Hollywood: “Nobody knows anything.” It’s a partial quote from Oscar-winning screenwriter William Goldman.

The entire quote is:

“Nobody knows anything … not one person in the entire motion picture field knows for a certainty what’s going to work. Every time out it’s a guess and, if you’re lucky, an educated one.”

William Goldman has made some educated guesses. He is the writer of Butch Cassidy and the Sundance Kid, Marathon Man, The Princess Bride, and other films.

Today, with several award-winning seasons of The Walking Dead under its belt, Telltale’s ability to make educated guesses looks like it was foretold, but as late as 2012, you’d be forgiven for not expecting the little company in San Rafael to deliver much more than broken promises, much less educated guesses. High-profile licenses like Law & Order, Back to the Future, Jurassic Park, and CSI had flowed through Telltale’s fingers, but success evaded its grasp until, as The Verge recounts, The Walking Dead’s lead developers Jake Rodkin and Sean Vanaman mounted a mini-coup:

“If Telltale’s financial woes had one positive creative impact on The Walking Dead, it’s that the poor reception for Jurassic Park meant the studio had little time to slow or halt development. The game had to come out, which gave The Walking Dead creative team leverage to ignore or skirt around feedback from upper management that they vehemently disagreed with.”

Rodkin and Vanaman led much of the first season, imbuing the game with a singular creative vision that was at once slightly radical and comfortingly coherent. In an industry that typically ignores narrative, or worse, shunts narrative design to the absolute last minute, Telltale had spent years imbuing its creative process with a lavish devotion to story. Then, in a little-noticed corner of the studio, two creative geniuses took that spark and kindled a flame.

What happened next is a tale as old as time: Everyone wanted a piece.

As The Verge wrote:

“[T]he success of The Walking Dead spurred the company to expand rapidly: in order to suit both its growing ambitions and keep investors happy, it became a company that many long-standing employees no longer recognized. ‘We went from a small and scrappy team to kind of a giant studio full of 300-plus people,’ says former Telltale programmer and designer Andrew Langley, who worked at the studio from 2008 to 2015. ‘You walk around the office, and you don’t really recognize anybody anymore.’”

Rodkin and Vanaman left after making their educated guesses for The Walking Dead. They co-founded Campo Santo, and made Firewatch.

None of this is to say I put the entirety of Telltale’s success (and failure) at those two gentlemen’s feet. They’d be the first to tell you it wasn’t just them. What I will say, though, is very few people in either Hollywood or video games have cracked the code for making commercially successful products that are both creatively satisfying and repeatable. Because nobody knows anything. It’s a guess. Every time out.

Video games may be pulling ahead of Hollywood in terms of annual profits, but there are a few things the film industry has figured out that video games studios haven’t. And that’s how to absorb the impact of a bad guess without ruining the lives of hundreds of creatives.

“Let us be clear. The executives at Telltale are incompetent,” reads a statement issued by unionization activists Game Workers Unite. “They are exploitative. They knew that this was coming and failed to warn anybody.”

In June 2016 (the last month for which statistics are available), the no fewer than 13 separate unions. Writers, directors, producers, actors, grips, and even talent agents are represented by unions that collectively bargain for better wages, better treatment, reasonable overtime pay, and — what would have protected the 250 former Telltale workers — employment and severance guarantees.

The next time you go see a movie, stick around until the end of the credits. If it’s a typical blockbuster film, there will be hundreds, maybe thousands of names scrolling past your eyeballs, and after the very last names, after the “thank you” and assurances no animals were harmed, you’ll see the logos of the various unions whose workers created your 90-180 minutes worth of entertainment.

Now, do the same thing for a blockbuster video game. You’ll probably see just as many names. Can you guess how many unions there are? None.

“As long as workers are isolated from each other when standing up against exploitative patterns within management, we as an industry will suffer. We are here to unite workers — to leverage our collective strength to make a difference in the industry. We stand with the staff who have been thrown aside by Telltale’s management and are here to help in any way that we can.”

Over the weekend, as the shock of sudden unemployment began to fade, many former Telltale developers began sharing their private recollections on Twitter, under the #TelltaleMemories hashtag. Some of my favorites are below.

Did anyone post about the time the trophy case at Telltale shattered from the weight of all of the Walking Dead awards? #TelltaleMemories

One of my favorite #TelltaleMemories is a bit selfish but it’s directing 2 episodes over the course of my pregnancy. STRESSFUL but also so satisfying and with great teammates like Jason Pyke, Erin King, and more. 😊 baby arrived 3 days after WD302 wrapped 😯😂

– The Walking Dead's first prototype was all text and UI, built by @CarlMuckenhoupt and based around the L4D IP (someone talked to Valve about us doing it and it never happened but TWD did!)

I was recording a toy 20 hours a week for months and would have to then drive 55 miles to Jory’s to record #TWDG S2, usually grumpy. At one session, for no better reason, every line I’d end with an “F— you”. “F— you, Bonnie, f— you Luke, f— you ARVO” #TelltaleMemories

All of my favorite #TelltaleMemories are about the people I got to work with and interact with during my time there. Despite the systemic leadership abuse, they made me look forward to going into the office each day and jazzed to work an event.

While the fate of Telltale’s remaining 25 employees and its many games left unfinished remains to be seen, it’s quietly becoming clear that the most important story these talented narrative designers will tell is that of an industry still learning to be kind.