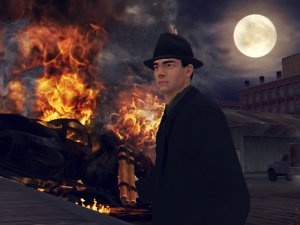 Mario Puzo’s son has sued Paramount Pictures over a claim that the studio failed to pay royalties for the 2006 videogame adaptation of The Godfather.

A USA Today report says Anthony Puzo is seeking more than $1 million in damages on behalf of his father’s estate for breach of contract. The lawsuit claims that Mario Puzo made a deal with Paramount in 1992 to receive a “significant share” of any income derived from audio or visual products that made use of material taken from The Godfather movies.

Puzo claims the arrangement was made because his father was a young and struggling author who sold the rights to develop The Godfather novel into a movie to Paramount for an “extremely low price.” The movie went on to win three Academy Awards, including Best Picture and Best Actor for Marlon Brando.

Based on the movie, The Godfather: The Game was released in 2006, featuring voice acting provided by several actors from the movies including James Caan, Robert Duvall and Abe Vigoda. Francis Ford Coppola, who directed The Godfather movies, criticized the release of the game, according to a GamesIndustry report, claiming he was unaware of its development. “I had absolutely nothing to do with the game and I disapprove,” he said. “I think it’s a misuse of film.”

The game was released to average review scores, with Metacritic rankings across all platforms in the mid-70s. Electronic Arts, the game’s developer and publisher, is not named in the suit.