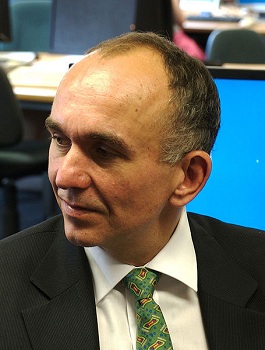 Peter Molyneux’s name is one of the most recognizable in the game industry. He made his bones with games like Populous and Dungeon Keeper before he moved on to create the Fable series for Microsoft consoles, but that wasn’t enough for him. Molyneux quit his cushy job last year as Creative Director of Microsoft Game Studios in Europe with the goal of using his startup 22cans to recapture the creative spirit of the lean design teams of his youth. Curiosity: What’s Inside the Cube was a mobile psychological experiment with mixed results – the problems stemmed mostly from the technical side of things – but Molyneux hopes he can build on what he learned from it with the recently announced return to the god game genre in Godus. 22cans began a Kickstarter campaign to raise £450,000 to build Godus, inspired by the alternate funding methods used by Markus “Notch” Persson and Tim Schafer to hopefully net some serious dough. Through crowdfunding his next big game, Molyneux wants to avoid being tied to a publisher so he can make the game he wants to, while at the same time making that all too important connection with his future audience by letting them comment on and guide the whole development process.

And he’s scared shitless it’s all going to fail.

You’d think Molyneux is a wealthy man, having produced such a library of well-known games and working for a billion-dollar company like Microsoft for so long, but that’s just not true. “A lot of people think I shouldn’t be on Kickstarter because I bathe in diamonds and drive around in a gold Rolls Royce; I’m not that wealthy,” he said. “I’ve used a lot of my money to found 22cans and release Curiosity and to build a great team up.”

Most of any personal wealth Molyneux might have had is already invested. He and the 19 other employees at 22cans are risking it all on the childlike enthusiasm Molyneux brings to game development. And as everyone knows, the promise of the esteemed designer’s interviews before a game is released doesn’t always match the product when it ships. That exuberant quality might be Molyneux’s greatest asset, but he’s frightfully aware it could be his downfall.

“That’s my flaw,” he said with a nervous laugh. “I get so excited about [my games] that I can’t stop myself. It’s not a PR trick and everyone thinks it is. The hype is literally what I am.”

The thing is: I bought it. Again. Hearing Molyneux speak about Godus is just as enticing as it was hearing him say Fable was going to be the best RPG ever. He’s got so many wonderful ideas for what he wants Godus to be, it’s incredibly difficult to resist being infected by his enthusiasm. “Imagine if I could connect everyone together like everyone’s connected together in Curiosity but in a god game. Imagine if I could do that. Imagine what that would be. Imagine if the world that you interact with is delightfully, incredibly, simple to interact with but immensely deep as all of those god games were, whether it be laying down streets in a city or whether modifying the land in Populous or whether it be digging out dungeons in Dungeon Keeper. Just going back to that format, reinventing it, looking at the games that I did in my past, throwing all the stupid school boy mistakes out of those games and reinventing it, engaging it, is absolutely one of our goals. I want to reinvent the god game genre,” he said.

“It is a quite ambitious thing to do.” It is. And I want him to succeed. 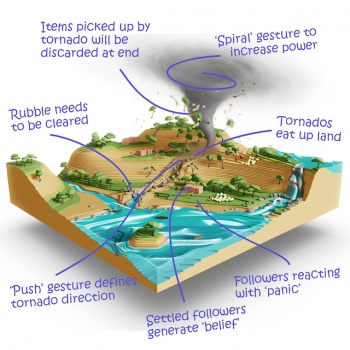 With Populous, Molyneux essentially created the category of games in which the player acts as an all-powerful controller of a city or a people. So-called god games are hard to define, even for the man who first thought them up. “The definition of what a god game has been diluted,” he said. “We can point at some things and call it a god game but they’re not god games. The barest essential elements are still in there: you’re able to look down from on high and able to influence the world. That still may be in there, but are they god games?”

Molyneux doesn’t think Cityville fits the bill. “The genre of god games was grabbed by some Facebook games and they applied some free to play mechanisms when they were very greedy and I think the whole spirit of what a god game is has been lost,” he said.

So how will 22cans take back that spirit with Godus? Well, Molyneux has a few ideas, and he sure isn’t tight-lipped on his goals. The concept for Godus is pretty simple: you take the role of a deity guiding your people to greatness by shaping their land for cultivation and defending them from enemies using god-like powers that take Belief points to cast. Following the theme of Black & White – Molyneux’s last god game, released in 2001 – you can either be a good, benevolent deity or a strict, terrifying one. At its heart, Godus will be a strategy game, but he wants the user experience to be as streamlined as possible without all those silly icons crowding the screen. “The aspiration is that the more you can build into the world that’s implemented, the less that you can clutter up the display,” Molyneux said. “You should be able to look at your world and judge how you’re doing.”

Taking a cue from Blizzard, Molyneux wants to create a game that’s easy to learn but hard to master. “You can include this as one of the huge flaws with the original Populous, it was very hard to learn,” he said. “You need to get people doing something, in the game, as quickly as possible.” He told me about the design idea of a Homeworld, the single-player base you start playing with in the current build of Godus. “You only start in your Homeworld with two people and those two people will build this little hut and from that little hut you will gain just about enough Belief [points] to start sculpting the land.” Terraforming will play a big part in how fast your people become civilized and advance in technology.

The Homeworld impacts Molyneux’s idea behind multiplayer. “The multiplayer campaign works like this: you take a number of your followers at the start, it’s not going to be very many because you’re only going to have a small amount of population and you’ll kind of invest them into your multiplayer game. If you are successful, you’ll bring [them] back into your Homeworld with a lot more followers and a lot more belief which will benefit the Homeworld. As you play, your Homeworld is turned from this tiny little hut into a little tiny village into a town, into a city, into a metropolis and eventually it’s going to cover the whole of this land. The cool thing is that all of these Homeworlds are connected using the Curiosity technology.” The possibilities of using the always-on connection Curiosity in a more advanced strategy game is exciting for Molyneux.

You’ll even be able to play Godus on your phone or tablet. “The thing that’s astounding to me is that there are no real true multiplayer games on mobile,” Molyneux said. There’s no real strategy game that allows you to access your game from anywhere, be it on your gaming PC at home or on the train with your iPad. “All of those devices we are going to support. We’re going to focus a lot on the PC first, probably the early Alpha’s going to be on the PC, but there certainly will be thinking of the multi-device player connecting lots of people together. That’s something we definitely can do.” 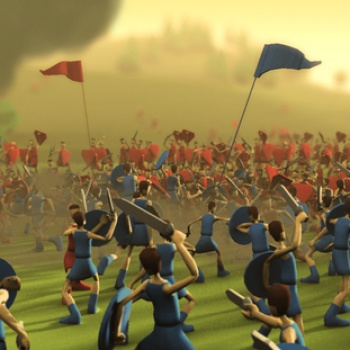 He’s taking inspiration not only from the advances in computer and mobile technology since he made Populous in 1989, but from the wealth of designers that have made similar games since then. Molyneux’s not above saying he takes concepts he sees in other games and adapts them for his new projects. “That’s what designers do. Any designer that says they don’t is lying,” he said. “We are thieves, we steal and we adapt and we put in.” Specifically for Godus he’s looking at a few recent games that experimented with the god game genre. “There’s a title called From Dust which I thought had some fantastic visual effects. There’s a little mechanic out of Minecraft that I’m definitely going to be interested in stealing but I don’t mind too much because I know that [Notch] stole stuff from Dungeon Keeper.”

Beyond mechanics, Markus Persson might have been the impetus for Molyneux to leave Microsoft in the first place. “When I saw people like Markus Person from Mojang, what he did, and I saw the reaction from publishers and Microsoft [who said] ‘Oh, Minecraft, a lot of rubbish, it’s so blocky and doesn’t have the achievements, doesn’t have a tutorial.’ And I kept saying to myself, ‘That is what the future is, what he’s doing is what the future is,'” he said.

The spirit of youthful creativity which Mojang seems to embody might have been what inspired Molyneux to ditch his corporate job to start up a new company, but there’s something more at stake. It’s possible to become stifled in your day-to-day routine, even if that’s making games like Fable, and Molyneux started to feel that he wasn’t pushing himself, wasn’t taking risks. The safety net of producing regular releases of first person shooters and platformers might sound appealing at first, at least to the shareholders, but he said he’s never felt more alive than he does at 22cans.

“The choice of me leaving Microsoft was a tough one, it was tough to leave my friends and the people I respect at Microsoft,” he said. “But it was going to happen. It’s like I’m like a moth to the flame. Once you show me the flame, what is possible out there, me shouting at my friends saying, ‘Why are these experiences so fucking awful?'” He had to make a change.

For him, the publisher model was just about saying, “We’re just going to do those formats and genres over and over again. There’s nothing wrong with that by the way, I love Call of Duty. Black Ops 2 is the best first person shooter I’ve played hands down,” Molyneux admitted. “But it’s got to be more and if I’m true to myself, if I’m true to what I’m capable of – bringing people together and focusing on one vision – then I have to be brave. It’s an insane thing to do.”