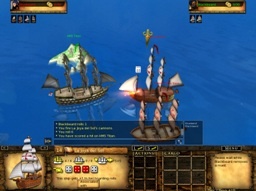 WizKids’ Pirates of the Spanish Main has it all: an interesting theme, fun mechanics, and most importantly, that addictive quality that somehow makes you shell out hundreds of dollars for little toy ships. However, it came as a surprise when SOE–best known for their MMOG lineup–picked up the game and decided to digitize it. I spoke with Kyle Heuer, an associate producer at Sony Online Entertainment-Denver, about transitioning the tabletop pirate game to an online format.

The Escapist: So, who are we talking to? What is your role on Pirates CSG?

The Escapist: For our readers who haven’t heard of/played Pirates of the Spanish Main, could you give us an overview of the game? What are some of the major differences between the tabletop/card game and the electronic version? How recognizable will the game be to someone who has played the tabletop/card game version?

Kyle: Pirates CSG Online is the digital version of the table-top game by Wiz Kids. In the game you command a fleet of ships, and battle against your foes as you search the high seas for treasure.

When creating the online version of the game we wanted to stay true to the original. So if you’re already familiar with the table top game, you’ll feel comfortable jumping right into the digital version. The ships look just like they do in real life and have all the same game text. The game map is set up the same way, and the gameplay hasn’t changed. What you will notice right off the bat though is that the ships have come to life in 3D animation, with billowing sails, cannonballs flying through the air and smashing into ship and sending splinters everywhere. And even the sea is animated so that it ripples and reflects as your ships sail by.

The Escapist: What prompted you to take Pirates of the Spanish Main and turn it into an online game?

Kyle: We have always been a fan of the table top game from Wiz Kids – it’s fun and fast game that is set in the world of pirating – what could be better than that? Wiz Kids really innovated miniatures-based gaming, and this was a logical next step for us, going from Trading Card Games to digital minis. The colorful setting and ships seemed like a perfect fit for online play. 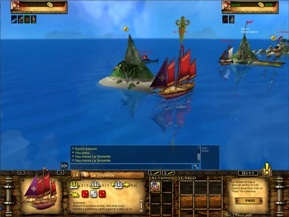 The Escapist: Getting more into the nuts and bolts of it, how do you take a tabletop/CCG-style game and turn it into an online game? If you go for the “straight port,” you have players looking at a bunch of cards on the screen, which is kind of boring, but if you change it too much, it’s not the game that they’ve been playing all along. What mechanics do you keep and what do you discard? How faithful of a translation is it?

Kyle: It’s actually a very faithful translation of the game. Every rule in the table top game is incorporated into the online game. There are always going to be issues in the game where the rules of a certain ship or card are difficult to program, but our goal is to make it true, so we work through those issues. For example, Davy Jones was a very difficult crew member to program and test since he can copy the game text of any other ship or crew. The development and testing process on him was lengthy, but he works as intended.

At the same time we wanted to take advantage of the digital medium, and make the online experience feel special. Immersion in the game is important, and hopefully this takes the players one step closer to the fantasy of plundering treasure on the high seas.

The Escapist: With the “online CCG”-style games, one question that comes up is the investment. In other words, how much do I have to spend to compete and be successful in the game? What’s the price of a good “starter” setup and how much would I have to spend to be, say, tournament-competitive?

Kyle: All these answers are really subjective depending on what your goals are for the game and yourself. A player looking to get into the game can get a great mix of ships and crew with about 3 game packs (about $12). This will give them a good feel of the game and send them on their way. However, if you want to work at being a competitive player, win tournaments, and try to become highly ranked, then you might want to expand your fleet. However, one of the fantastic aspects of this game is the online community that has developed. Many players are eager to share extra common ships and crew with new players of the game. It’s easy to make new friends and expand your fleet quickly.

The Escapist: With CSGs, the barrier to entry can be pretty high. Aside from card cost, there’s the fact that the games themselves tend to be pretty complicated. How difficult is it to play Pirates? How much is skill a factor versus the sets you’ve purchased?

Kyle: This is one of the things that initially attracted us to the Pirates CSG. With some of our other card-based games, the learning curve is relatively high. With Pirates, it’s fairly easy to learn how to play. With many miniatures games the most complicated thing is movement on the table and rules associated with a given unit. The online version of the game takes care of this for you, so you can concentrate more on tactics and fun. We’ve got some very cool tutorials that people can play before they buy anything, that will walk them through everything they need to know to play.

The Escapist: Who do you think Pirates appeals to? Obviously, people who like pirates, but who do you see playing the game? Hardcore MMO players from SOE’s other offerings? Another group altogether?

Kyle: Because of Pirates CSG‘s accessibility to new players and quick-fun play style, it’s a natural game for more casual strategy gamers. At the same time, Pirates offers tactical elements that appeal to almost every gamer out there. Pitting your wits against a live opponent rather than a scripted scenario is a lot of fun! 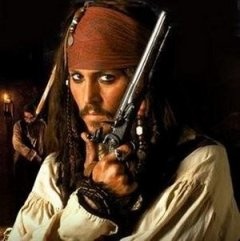 The Escapist: In a related question, SOE is usually seen as an MMO company. Where does Pirates fit into your portfolio? What does it offer you as a company? Are you trying to broaden the audience or is this just a niche product that seemed like a good idea?

Kyle: The SOE-Denver studio (formerly Worlds Apart Productions) is a recent acquisition by SOE, and we’re dedicated to creating the best customizable online games. Our past products include Star Chamber, The Lord of the Rings Online TCG, Auto Assault TCG, and Pirates CSG Online, and we’re about to launch the Stargate Online TCG next week! So our game studio, while being new to the SOE family, is definitely not new to the space. SOE is interested in broadening its entertainment offerings to provide players a complete package and our Denver studio was a perfect fit.

The Escapist: And since the theme of the issue is Pirates, who is your favorite pirate?