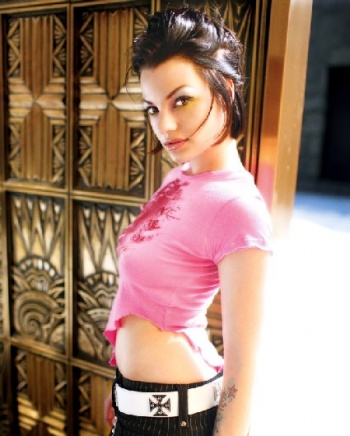 For some people, it can unfortunately be a hard concept to swallow: Adult actors and actresses are regular people like you and me, with their own hobbies and interests – they just get paid for having sex, too. And with gaming becoming more and more prevalent in the mainstream, is it any surprise that said adult performers like gaming? Hey, somebody should make a video series out of that sort of thing, you know!

These days, though, when she’s not playing New SMB Wii, she’s getting her MMOG on. “Well I started out playing Final Fantasy XI, and when WoW came out, my guy got into it so I would just watch. About a year and a half or two years ago, I got my own character and started playing off and on for about a month. This past Christmas is when I would play everyday, all day long.” The benefit to her job, says the actress, is that she schedules her own work – so if she feels like grinding out some Tier 10 via Frost Emblems for two weeks or so, she can.

Of course, that isn’t to say that her job and her gaming can’t intersect. “[We] talk about games quite a bit behind the scenes on a lot of my movies,” she said, and noted that she’d actually be interested in mixing the two together. “I’d love to dress up as my Priest on World of Warcraft and do a scene like that. I remember I shot a scene with Kimberly Kane where we were both playing the Wii, and we were supposed to be nerd girls then yeah, the sex started to happen. I’ve been thinking about it before, but now I’m really interested in it.”

Maybe the I Hit It With My Axe crew could bring her on as a guest star. Or, if there are as many secret nerds in the adult film industry as there seem to be, they could start an entire MMOG-focused spinoff.