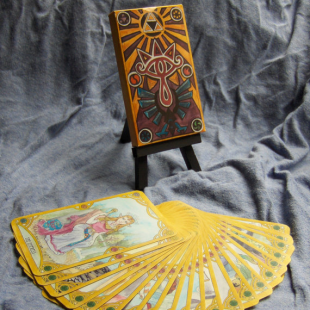 Generally speaking, I don’t put much weight in fortune telling. The idea that someone could make predictions about my life based on a random hand of cards, for instance, just sounds a bit less than credible, in my opinion. Even so, I’ll admit that there are perhaps a few things that could convince me to trust in the wisdom of a soothsayer. Getting frequently lost in A Link to the Past for instance, led me on more than one occasion into the fortune teller’s house for advice. In the real world meanwhile, an artist’s recent custom set Zelda tarot cards look like just the sort of thing that could convince me to give divination a second chance.

The tarot deck in question was created by Etsy user PixelPerks. The deck, which was originally hand-painted with watercolors, included 22-image cards modeled after “the symbolism found in the original Tarot.” They cards were printed on “casino-quality” cardstock, all of which was packaged and sold in a hand-folded box.

As nifty as the cards are just conceptually, the real treat is the gorgeous imagery they feature. Suffice it to say that if you have a Zelda fan in your life, you may want to consider picking them up a card or two. We’d understand if you wanted to get them a full deck but, unfortunately, PixelPerks is currently (and understandably) sold out of those and is only offering individual cards at eight dollars a piece. I am foreseeing some online purchases in my future.

The Best And Funniest Wondercon 2014 Cosplay