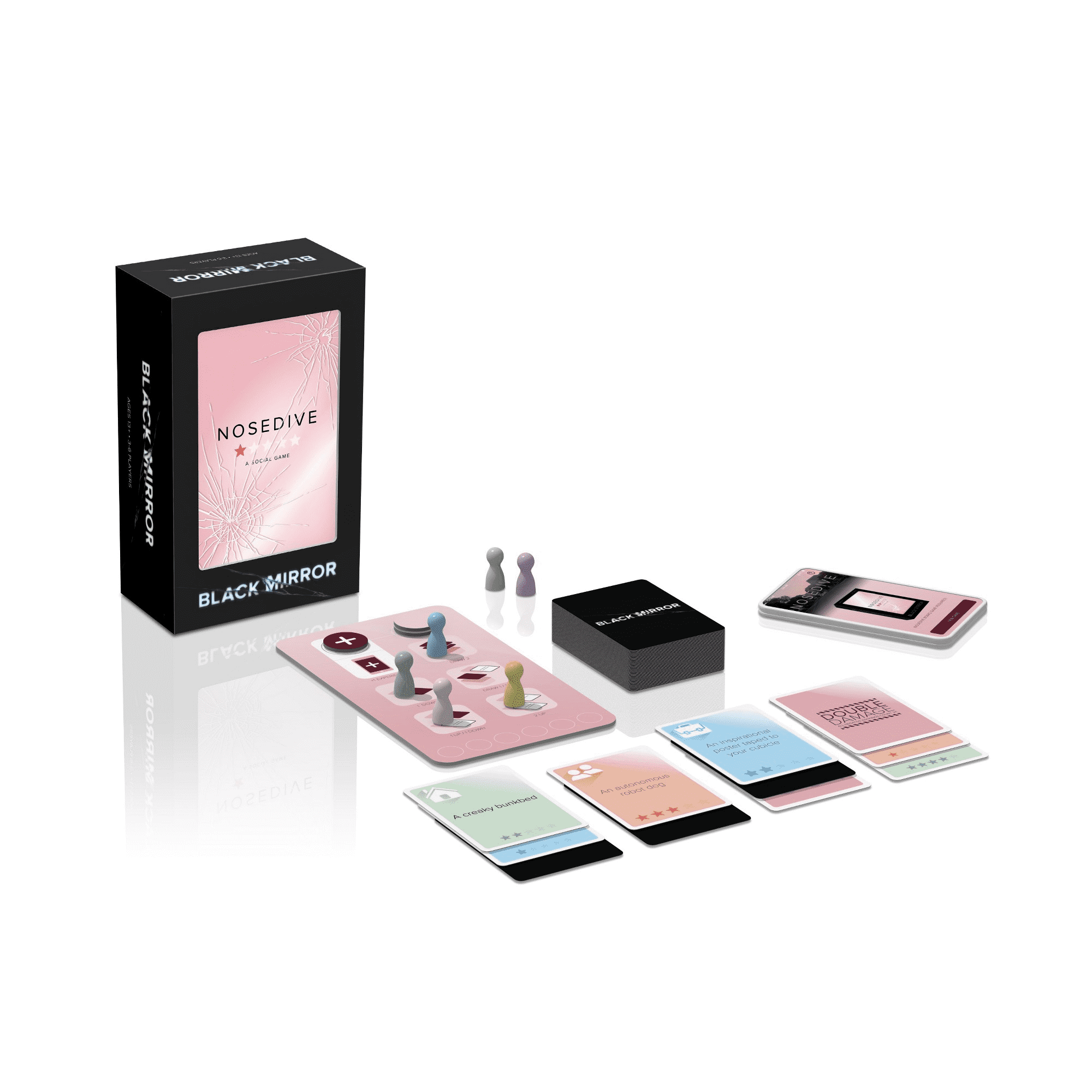 New Year’s is a time when many people resolve to improve their lives. But do you really want to get in shape, put your finances in order, and spend more time reading in 2019? Or do you just want your friends to look at your social media feed and know that you’re better than them? Asmodee’s Black Mirror: Nosedive is for those who understand the appeal of the latter option.

“Nosedive” is one of the most anxiety inducing episodes of Netflix’s Black Mirror, which is saying something since the show is entirely devoted to reasons technology should make us very nervous. Its power comes from it’s disturbingly plausible setting, a near future where people rate every interaction with each other on their smart phones and those scores are used to determine where you can live and work.

In the game, players compete to have the most perfect life by both collecting cards representing their lifestyle and raising their social score with a mini-game played on a smartphone. These elements are unfortunately just as disconnected as they sound. Nosedive is half tactical worker placement game and half party game. As a result, it doesn’t quite succeed with either element.

Three to six players put their names and the color pieces they’ve selected into the app, which randomly assigns starting social scores. The player with the highest score gets to draw one card per player from the lifestyle deck and lay them down half face up and half face down, creating the start of decks that players will draft at the end of the round. Some of the cards are actually worth negative points, so you have to be careful of picking up things you can’t see. But facedown cards can also be the way players going late in the draft make piles they’re eyeing look less appealing than they actually are. Players with the lowest social status draft first, a mechanic meant to help them catch up even though the social leader’s hidden knowledge also helps them stay dominant.

Players each get three turns moving their pieces around a small game board representing various actions like drawing one card from the lifestyle deck and placing one face up, or putting one card face down. You can’t do the same action two rounds in a row and if you want to take an action someone just took you have to pay them a card tax. There isn’t nearly the level of sophisticated strategy found in other worker placement games like Lords of Waterdeep, but considering your next move gives you something to think about once you’re done giggling at the text on the lifestyle cards. These range from highly mediocre like an unpaid internship to the extraordinary like owning a private island. Some, but not nearly enough, are references to other Black Mirror episodes like having four seasons of Space Fleet or making a perfect online dating match.

Each lifestyle card is worth between one and five stars, with the high value cards being much rarer. Like in the episode, the lifestyle you can have is limited by your social score. Players start at a score of around 2, so you really have to be doing well to be able to make use of a five star card at the end of the game. Cards are also color-coded representing your social, work and home life, and you get bonus points for every set of one of each you collect. In theory the game’s message is that a well balanced if fairly average life can be just as satisfying as one of with high social status and a few extraordinary features. In reality, it means if you’re winning you’re likely to win big.

Players raise or lower their social scores by taking turns passing around whoever’s smartphone is running the companion app and assigning “experiences” to other players. By default you get one experience for each other player, though you can earn more choices by taking actions during the lifestyle phase, which is certainly worth it because the social section has such an outsized impact of the game. Like with any number of party games, the goal is to know your audience well and give each player the experience you think they’re most likely to enjoy. Barring that, the goal is just to avoid giving really bad expereinces to people who have higher social scores than you as that’s the surest path to getting your score lowered even further.

Each player then goes around and reads what they’ve been given out loud, picking the experience they think is the best and which is the worst. The quality of choices varies dramatically round by round, ranging from pretty bad stuff like doing household chores all weekend to winners like getting a comped meal because you were recognized for your food blog. The picks are pretty consistent within the round, so the choice tends to revolve around personal preference rather than objective standards of fun.

The real problem is that Nosedive misses what made its titular episode so horrifying. Lifestyle ranking in the show isn’t based on how your life actually is but how you make it appear. The episode’s main character earns a point infusion for staging a beautiful image of a latte and a cookie and claiming she was enjoying a blissful moment at her favorite coffee shop, but in reality didn’t seem to enjoy actually consuming the food or drink. Likewise the experiences being rated are petty interactions between people, like being short with a customer service representative or cutting someone off in traffic. The game is trying to approximate the lengths people in the episode go to try to please their betters without seeming overeager, but it would be better if it took things to a further extreme.

Maybe players could have bad cards that wouldn’t count if they could lie about them well enough, covering up the rotten core of their lives with gorgeous selfies. It could force people with low social scores to do favors for those with higher ones like getting them a drink or moving their piece. As it is, Black Mirror: Nosedive is like so many people at the start of the New Year. It’s ambitious, but it’s still not as good as it could be.