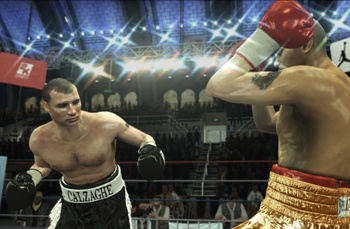 Boxing is a sport defined by its contradictions.

Matches are equal parts graceful maneuvering and brutal violence, boxing’s finest athletes are rewarded for years of success with a lifetime of irreversible brain damage, and Don King (a man who has never thrown a punch himself) has become one of the most iconic figures in the history of the sport.

It’s apropos then, that a game bearing the man’s name — a concept that I maintain sounds totally bizarre — would actually turn out to be a pretty competent boxing title.
Don King’s Prizefighter offers a robust selection of game modes: Exhibition, Career, Fighter Factory and on- and offline multiplayer modes are all available.

Exhibition is exactly the same standard fare offered in every sporting title for the last decade. You choose a fighter, an arena and an opponent, set the rules for your match, and spend the next few minutes beating the hell out of the AI. It’s exactly what you’d expect, and doesn’t disappoint.

Multiplayer, too, is pretty standard. Functionally, it’s the same mode as Exhibition, only now you have the option of playing against someone in the same room or across the country via Xbox Live. It’s simple, but it works well, and lag didn’t seem to be an issue in any of the matches I played.

Fighter Factory, as the name suggests, is where you craft customized fighters for use in all the other modes (with the exception of the Career mode). After selecting your character’s name, nickname, hometown and entry music, you’re presented with the increasingly common slider-based physique crafting screen. By amplifying certain attributes on your fighter’s face and body, you can make him look almost any way you’d like. I wish more tattoo options had been presented during this portion of the game, but that’s a truly minor knock against a solid component of the title.

All of that however, feels like an appetizer to the real meat of the game: The Career mode.
After constructing your avatar using a pared down version of the Fighter Factory described above, you begin your career. As in real boxing, you start out in a ratty gym populated with local crusty characters the likes of which would make Burgess Meredith proud. Though there’s no interaction with these characters or the environment they live in, they offer the sort of color you’d hope for.

After a bit of exposition, you’re shown the first of the game’s strikingly well produced live-action videos detailing your character’s theoretical exploits. I expected Don King to appear in these clips, but how they managed to wrangle actor Mario Van Peebles, hall of fame middleweight boxer Marvin Hagler, and other surprisingly big-name celebrities in and out of the world of boxing to appear in this game is still a mystery to me. It does, however, add a level of polish to these clips rarely seen in any game.

From these humble beginnings you work your way up the hierarchy of the boxing world. By defeating opponents and augmenting your fighter’s skills in the game’s short training minigames, you eventually arrive at the Prizefighter‘s pinnacle: A shot at the world title.
Aping recent wrestling titles, the game also tosses in a bit of a plot. Throughout your career mode, you’re offered the opportunity to make moral choices the likes of which have made for compelling cinema over the years. Ever wanted to throw a fight for cash? Now you can! 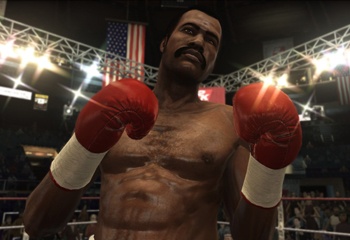 The choices are a bit cosmetic, and seemingly only exist to add immersion and provide an interruption in between matches, but the game is certainly more interesting for their inclusion.

“But whet abut teh actual boxin?” I hear you furiously misspelling in the comment box.

That’s where the game starts to fall apart.
Movement is controlled with the left stick, dodging and blocking with the right. Punches are thrown with the Xbox 360 controller’s face buttons: X and A control your left hand’s jab and hook and Y and B your right’s. To alter your aim between the head and the body, hold down the left trigger while throwing a punch.

Each punch can also be powered up using the game’s adrenaline system. By throwing successful attacks, you fill a blue meter beneath your health bar. Once it’s been sufficiently powered up, you can hold the left bumper while tossing a punch to put some extra force behind it, along with a special attack animation and neat slowdown effect if the attack lands.

On paper it seems like a simple system, but in practice, when some huge dude is trying to bash your brains in, it takes far too long for the system to become intuitive. Even with the career mode’s training match, I was never quite sure how to throw which punch where — a huge issue when your opponent is not similarly handicapped.

This becomes a problem when you take into account the realism of the game’s combat. Unlike more arcade style boxing titles, the key to success in Prizefighter is meticulous movement and well planned blocks and punches. If you simply wade in and start aiming for the face, even in the very first match, you will be beaten horribly in a matter of seconds.

Boxing fans will be giddy with how deep and technical the combat is, but for the vast majority of gamers the entire experience quickly devolves into a frustrating series of KOs and cranial hematomas. I like to think I’ve acquired a bit of talent with any game genre over the last few decades that makes it depressing that I lost twice before finally beating the career mode’s very first match.

Bottom Line: If you aren’t afraid of a huge learning curve and expect to have your virtual brainstem battered about your skull a few times before you start winning, the game offers an intensely deep simulation of actual boxing. It speaks to the game’s strengths that after all of my initial frustration I still stuck with it because the combat is, after everything, very compelling.

Recommendation: Buy it, if you’re the sort who’d shell out $50 for the Pacquio vs Diaz fight. If you have no idea who those people are, it’s a rental at best.