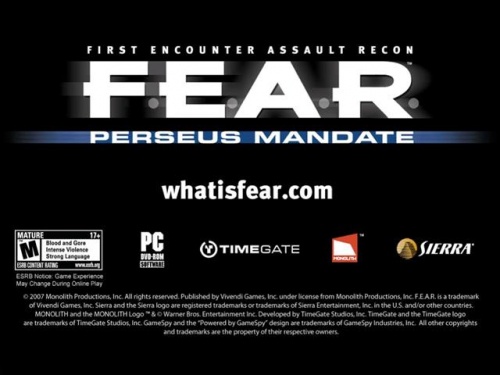 Let’s get right to it. F.E.A.R.: Perseus Mandate does nothing new. It makes a superficial attempt at separation from its predecessors, but the reality is there’s absolutely nothing here you haven’t already done, repeatedly, in F.E.A.R.. This isn’t a problem; if F.E.A.R. fans were concerned about repetitive gameplay, they wouldn’t be F.E.A.R. fans. The problem is far more fundamental: As a rehash, F.E.A.R.: Perseus Mandate isn’t a very good one.

The new car smell, such as it is, comes from the addition of a new element to the game: the mysterious, powerful and extremely well staffed mercenary army known as the Nightcrawlers. While it may be difficult to take seriously a gang of mercs whose name conjures up mental images of a second-tier Marvel superhero, in the game’s fiction the Nightcrawlers are the best of the best and the baddest of the bad, and a mysterious U.S. Senator – maybe the same one from F.E.A.R., maybe not, I couldn’t tell – has sent them in to the middle of the chaos at the Perseus compound to swipe Alma Wade’s DNA.

Why? I don’t know. The Nightcrawlers seem to exist solely to provide something new to shoot at, and DNA is as good an excuse as any to have them mucking around inside Armacham. Of course, using the Nightcrawlers to inject variety into F.E.A.R. is like using ice cubes to flavor your water, because aside from a lower-pitched voice and (slightly) different weapons, they’re virtually identical to the Replica forces, even wearing the same style of leather-and-Lycra uniforms with face-obscuring headgear. A tiny number of Nightcrawlers, distinguishable by their exposed military-style brush-cuts in lieu of sensible helmets, are “elite” models, tougher than the rank-and-file mercenaries and possessing a variant of your own not-so-unique-after-all time-slowing power that allows them to sidestep attacks at “faster than the eye” speed, but for all intents and purposes, if you’ve seen one Nightcrawler, you’ve see ’em all. 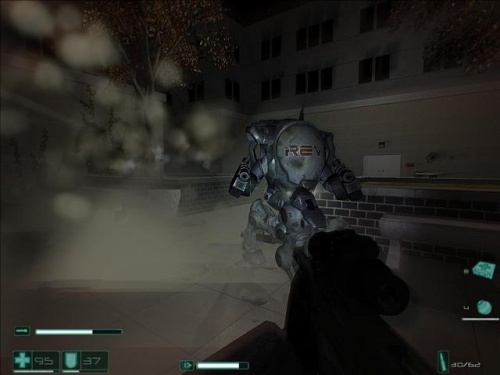 The game starts off in a familiar setting, not from F.E.A.R. itself but from the flood canal sequence in Half-Life 2. In what constitutes the game’s tutorial segment, you’ll pick your way through debris and deal with guys running around on overpasses and jumping down in front of you, learning how to crouch and jump and aim your weapons, until you quickly and inevitably find yourself separated from your colleagues and trapped in a sewer.

A few preliminary firefights later you’ll emerge from the sewers and almost immediately run into your old pal Spen Jankowski. Most of him, anyway; Spen appears minus his eyeballs, uttering the line, “Is someone there?” before disintegrating into ashes and dust. If you’re feeling some deja vu here, it’s because his appearance is a direct lift from the first F.E.A.R. game, in which he became separated from the team and then later makes exactly the same appearance to the player after presumably being Fetteled.

I was taken aback at how quickly the game had shifted gears from “uninspired” to “ripping itself off,” but the longer I played, the more apparent it became that “takes place alongside” actually means “doing the same stuff as.”

My interest in anything plot-related evaporated quickly. It was disappointing, because I enjoyed the original F.E.A.R. story enough to want more of it, but playing Perseus Mandate was a lot like watching the Star Wars Holiday Special all those years ago: I wanted more Star Wars, and technically I was getting more Star Wars, but even at that tender age I was smart enough to know it wasn’t what I came for. 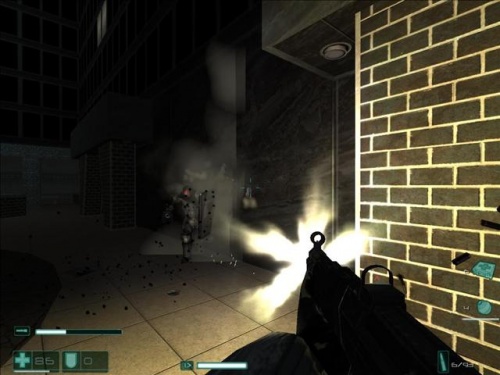 But even in the absence of a credible story (which admittedly was a bit of a common complaint with the original game as well), there is one inarguable point: Very few games do a better job of making you feel like the baddest man on the planet than F.E.A.R.. Wasting three heavily-armed goons with a long spray of machine gun fire while leaping over a counter and taking out the fourth by putting your boot through his skull – all in sweet, loving slow-motion – is just about the coolest thing ever. So even though the Perseus Mandate plot is, well, stupid and worthless, there were still bad men who needed killin’. I settled in for some good old-fashioned ballistic justice. After all, how could anyone possibly screw up F.E.A.R. combat, the one aspect of the game that is almost universally well-regarded?

Apparently I underestimated the creativity of the guys at TimeGate, because they managed to stumble over even this core gameplay strength in a way I hadn’t considered: by studiously avoiding it. Particularly in the latter half of the game, you’ll move through large stretches of levels conspicuously devoid of Replicas, Nightcrawlers and even the hapless ATC Security punching bags. When the game does kick it into gear, the intensity of the action is undeniable and still among the very best FPS experiences available, but the remarkably poor pacing all too often results in unacceptably long stretches between battles.

The horror side of the game is similarly weak. There are a few good jolts, when unexpected events or apparitions pop up out of nowhere, but what it lacks is the sustained spook factor that was so effective in the original. In fact, if the game weren’t trying so hard to shoehorn itself into the F.E.A.R. modus operandi, I suspect there would be no supernatural angle at all. Paranormal events are few and far between, and aside from a few notable exceptions, not terribly effective. But does it matter? Does the fiction in F.E.A.R., or in any action-oriented game, have any genuine relevance on the game itself? And is it fair to knock a game that may be reasonably competent otherwise, because it lets the storytelling slide?

F.E.A.R. established a narrative: a small, super-secret team of highly-specialized operatives trained to handle paranormal threats to national security, one of whom is possessed of super-human abilities and heightened psychic sensitivity as a result of his unique parentage. It ain’t Shakespeare, it ain’t even Planescape: Torment, but it does constitute a fairly definite set of boundaries within which the game operated. 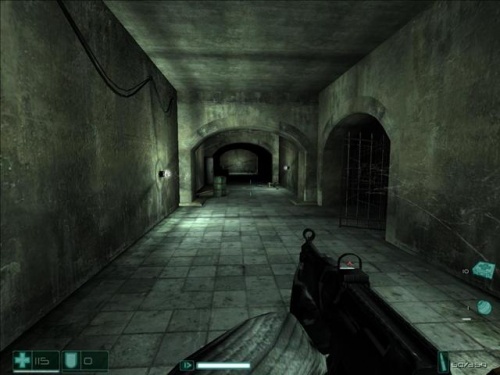 So why does it seem so difficult for this follow-up to work within those boundaries? Perseus Mandate‘s story is a convoluted mess that raises a lot of questions without even once making an attempt to answer them.

A bumpy transition from one entry in a franchise to another can quickly draw gamers out of the fantasy and reduce a potentially good game to a very average one. A better fit with the F.E.A.R. premise wouldn’t save Perseus Mandate from mediocrity, but it might leave people feeling a little more charitable about it.

Of course, it’s not all bad. As mentioned, when the combat gets going, it’s as good as F.E.A.R. has ever been – and that’s awfully good. Your two squadmates are very well voiced, and their dialog is natural and flows well, making them engaging characters despite their rather generic profiles when compared to the supporting cast of the original. There are a few good “made you jump” moments sprinkled throughout the game, as well as one of the most completely out-of-left-field (and funny – unintentionally, I think) death scenes I’ve ever witnessed. It’s not much. It’s not close to enough.

As with all things, the game will eventually end. And when it does, it happens quickly; in truth, it doesn’t end so much as just stop dead and roll credits. Nothing is explained, nothing is resolved and in fact the final post-credits video only leaves things even more confused. If you’re optimistic enough to make it all that way with some sliver of hope in your heart that the endgame will finally answer a few questions and maybe help you make a little sense of it all, you’re going to be disappointed and frustrated.

You might also be annoyed, because what you’ll have to show for your efforts and your money is a stupid ending to a blatant attempt by Sierra to squeeze a few more bucks out of the F.E.A.R. franchise before Project Origin arrives on the scene. Setting aside the gentle touch of polite expression for a moment, it’s difficult to see F.E.A.R.: Perseus Mandate as anything but a lazy, shameless cash grab that reflects very poorly on Sierra’s interest in the future of the franchise. Even if you’re willing to believe that what the world really needs is another F.E.A.R. expansion, there’s absolutely no excuse for doing it like this. To paraphrase Captain Raynes, who had the honor of uttering the best line in the game: I sure as shit wouldn’t do this for 30 bucks, would you? No, David. No, I would not.